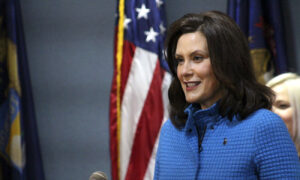 Michigan Gov. Gretchen Whitmer said her husband did ask for special treatment from a worker but claimed the request was a joke.

“My husband made a failed attempt at humor last week when checking in with the small business that helps with our boat and dock up north. Knowing it wouldnt make a difference, he jokingly asked if being married to me might move him up in the queue,” Whitmer told reporters Tuesday.

“Obviously with the motorized boating prohibition in our early days of COVID-19, he thought it might get a laugh. It didnt. And to be honest, I wasnt laughing either when it was relayed to me because I knew how it would be perceived,” she added.

Mallory and Whitmer own a house about 25 minutes from Traverse City, which is located in northern Michigan.

Dowker wrote on Facebook that the harsh restrictions Whitmer imposed to try to curb the spread of the CCP (Chinese Communist Party) virus cost his company three weeks. When a man called wanting his boat in the water, Dowker said it was impossible.

“Well our office personnel had explained this to the man and he replied, I am the husband to the governor, will this make a difference?” Dowker recounted.

According to Whitmer, her husband regrets what he said.

In a statement to news outlets before the governors admission, her office declined to address “every Read More From Source
[contf]
[contfnew]