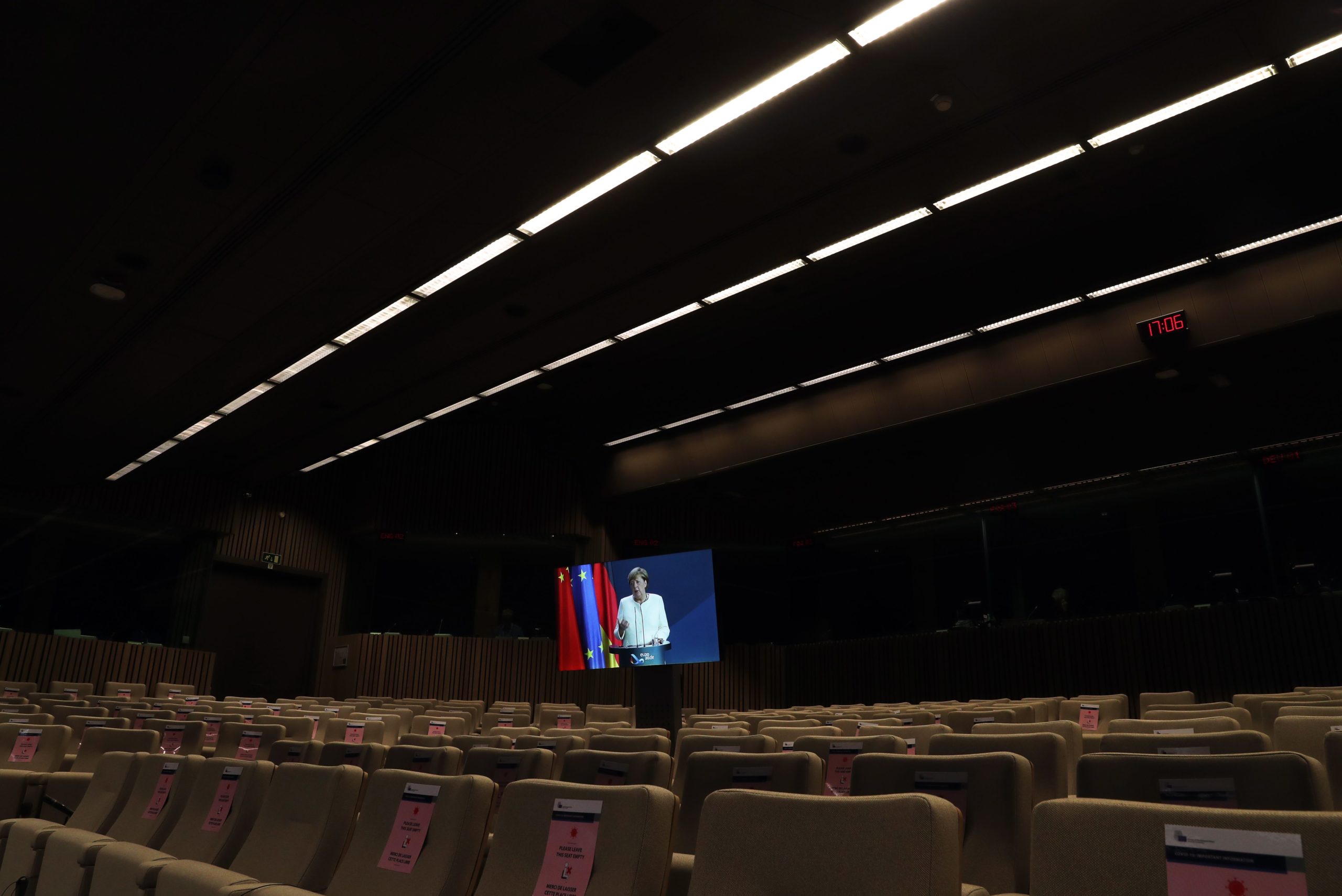 It was not the China summit of Angela Merkels dreams.

The German chancellor, who is heading into her final year in office, had envisioned a dramatic gathering of all EU leaders and Chinese President Xi Jinping — a highly ceremonial meeting in Leipzig to cap her 15 years of diplomatic outreach to Beijing and to show that the EU27 are united in confronting and engaging with the rising power they have branded a “systemic rival.”

Instead, as a result of the coronavirus pandemic, Merkel had to scrap the in-person summit and settle for a videoconference that Commission President Ursula von der Leyen called a “quadrilogue.”

Together with von der Leyen and European Council President Charles Michel, Merkel, who dialed in from Berlin, aimed to draw a tougher line with Xi on a wide array of issues, especially trade, but also human rights and climate policy. Together, they delivered a pointed message intended to make clear that China should not presume the EU to be any easier of a rival than the United States, and that Beijing still has a long list of commitments to fulfill if it wants to complete a long-planned investment agreement.

“We see that our investors just face too many barriers,” von der Leyen complained at a news conference following the video summit, which lasted about two hours.

“For us with market access, its not a question of meeting halfway but its a question of rebalancing the asymmetry and a question of openness of our respective markets,” von der Leyen said. “So we need China to move … if we are to achieve our shared objective of finalizing negotiations this year. So, in other words, China has to convince us that it is worth having an investment agreement.”

But even as the leaders insisted that they had bluntly reiterated the EUs priorities, including concerns about the situation in Hong Kong, human rights abuses against Uighurs in Xinjiang, and repression in Tibet, Merkel had to concede that it was not quite the display of European unity that she had hoped to highlight during Germanys presidency of the Council of the European Union, which runs until the end of the year.

“It was important that we had discussions with all member states in advance, so that this was not just a summit between the three of us, but the Council president and I worked out the common EU-China position in talks with all member states,” Merkel said at the news conference. “And I believe that this alone was a very important process for all of us, which is also a contribution to our being able to make a foreign policy in the future, for strategic partnerships, which is more of a unified whole.

“Im not saying that this is already the case,” she said, “but that is more of a unified whole than we have perhaps seen in the past.”

“Europe needs to be a player, not a playing field,” Michel said. “Todays meeting represents another step forward in forging a more balanced relationship with China.”

In that sense, the meeting offered EU leaders a chance to be heard clearly in Beijing before the November presidential election in the United States potentially yields even further turbulence in global trade relations.

“We made it clear where we stand. Where we agree, and where we disagree,” Michel said. “Real differences exist and we wont paper over them. But we are ready to engage.”

At the same time, officials are clearly struggling to show some results of their efforts, including trumpeting once again on Monday an agreement on the protection of geographical indications for gourmet foods and beverages that was signed last year.

Officials who have monitored EU-China relations closely say that Beijing is not pleased with being labeled a “systemic rival.” But they said they were well aware that Xi would control the message at home, portraying the discussions as positive and in Chinas best interests.

And they said the Chinese governments increasingly heavy-handed approach, including its new national security law in Hong Kong, had left many European officials highly ambivalent about a relationship with a partner they view aRead More – Source
[contf]
[contfnew]