Merkel is in New Delhi for a fifth round of talks between the EUs biggest economy and the worlds largest democracy under a cooperation platform, along with a delegation of ministers and business leaders. While the three-day trip is focused on building up bilateral trade ties, Merkel also faces calls to use her time with Prime Minister Narendra Modi to kickstart stalled talks on proposals for an EU-India free trade agreement.

Trade with India currently represents less than one percent of Germanys foreign commerce, with machinery products making up much of its exports and textiles coming in the opposite direction. Despite a near 20 percent growth in trade value to upwards of €20 billion through 2018, theres room to improve, especially as Chinese economic growth slows amid a trade battle with the U.S.

“You can say that our economic relations have increased quite a bit, but they could be even more intense,” Merkel said during a press conference with the Indian leader Friday.

Merkel earlier laid a wreath at a memorial to Mahatma Gandhi and said she would raise the issue of Kashmir — which has now been split into two provinces governed by New Delhi — with Modi directly. “Above all, we want India and Pakistan to find a peaceful solution,” said Merkel. “I would like to hear the arguments of the prime minister today.”

Talks over an EU-India free trade agreement have been on ice since 2013.

But for some, Berlins focus on Beijing, where growth has previously been rampant and German companies already have a foothold, has been detrimental to ties with New Delhi.

“For a long time Germanys Asia policy has been synonymous with its China policy, ignoring other emerging markets,” said Garima Mohan, who works on relations with India at the German Marshall Fund. “India has very low visibility in policy circles and the media in Berlin.”

Nevertheless, some 1,700 German companies operate in India and Merkels itinerary includes a trip on a metro train built by Berlin-based Bombardier Transportation and a visit to an automotive components company. The trick now is to pivot that to reenergizing discussions over a wider trade accord. 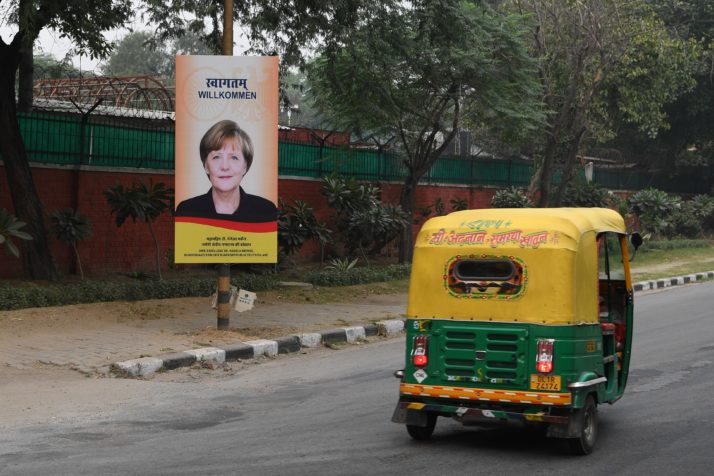 “The German economy would like to see a resumption of negotiations on an EU-India free trade agreement,” said Eric Schweitzer, the president of the German Chamber of Commerce and Industry, ahead of Merkels trip.

Talks over an EU-India free trade agreement have been on ice since 2013. New Delhi opted to scrap bilateral investment protection agreements back in 2016, which has made German investors wary of moving into India despite the size of the economy.

“The Indian market is very complex,” said Schweitzer. “In particular, small and medium-sized German companies are often faced with a regulatory labyrinth and are shying away fromRead More – Source