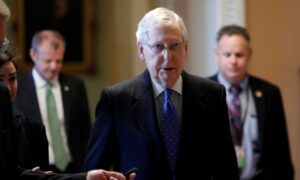 The benefits, which were included in the CARES Act passed in March, “will not be in the next bill,” he told other lawmakers in a conference call.

More aid is likely necessary in the coming weeks as unemployment rates continue to rise, but the unemployment benefits wont continue, he stressed.

Republicans are “going to have to clean up the Democrats crazy policy that is paying people more to remain unemployed than they would earn if they went back to work,” McConnell said.

At the same time, he said House Democrats HEROES Act passed last week will not serve as a model for future aid packages. The HEROES Act would extend the $600 extra per week until Jan. 31, 2021. It is currently set to end on July 31.

Now, Republicans will “pause” to evaluate the U.S. economy before a “phase four” stimulus package, the majority leader added in the call.

Sen. Lindsey Graham (R-S.C.) told The Hill that he also pushed President Donald Trump to agree to not extend the enhanced unemployment benefits.

“I asked him not to agree to that. That we cant. You can extend some assistance, but you dont want to pay people more unemployed than they made working,” Graham said, but he added that Trump didnt necessarily say he would support ending the benefits.

Rep. Don Beyer (D-Va.) told the website on Wednesday that a reduction in unemployment benefits would lead to a catastrophe.