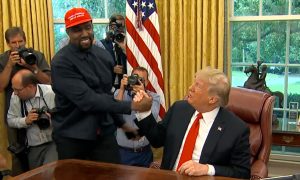 Following Kanye Wests announcement that he is running for president, several well-known billionaires said they support his bid.

“If there was Rank Choice voting available and Kanye West was on the ballot with Joe Biden and Donald Trump, I would have Kanye West ahead of Donald Trump,” wrote Dallas Mavericks owner Mark Cuban on Twitter.

“If you think Biden is a joke compared to Trump you arent paying attention,” he added, saying that it is “time to step away from all the memes and look at reality. The Pandemic Response could not be botched any worse and he refuses to take any responsibility or try to improve it. Thats disqualifying.”

Meanwhile, Telsa and SpaceX owner Elon Musk wrote to West: “You have my full support!”

On July 4, West wrote that “we must now realize the promise of America by trusting God, unifying our vision and building our future.”

“I am running for president of the United States,” he added, with the hashtag “2020vision.”

Its not clear if West has a campaign staff or if hes filed the needed paperwork to get on state ballots. Also unclear is if West will run as an independent.

We must now realize the promise of America by trusting God, unifying our vision and building our future. I am running for president of the United States

Some have noted that it is too late for him to get on the ballot as an independent in some states, while others said that should he mount a successful bid, it would take away voters from 2020 Democratic candidate Joe Biden and help President Donald Trumps reelection chances.