PARIS — French President Emmanuel Macron will head to China on Monday to help ensure that Europe doesnt end up as the big loser from U.S. President Donald Trumps impending trade truce with Beijing.

European leaders are increasingly worried that they will again be the No. 1 target for Trumps tariffs if America closes out a peace deal with China in the coming weeks.

“We dont want Europe to be a collateral victim of a U.S.-China trade deal,” an Elysée official said. “Hence the necessity of moving forward on bilateral negotiations between the EU and China now.”

Chinese and American leaders had been expected to sign a “phase one” trade deal at a summit in Chile in November but the timeframe for any agreement is now unclear after the cancellation of that event.

Trump has used a blitz of tariffs to force China into making a deal, and one of the EUs biggest fears is that he will next open fire on sectors such as European cars to wrest similar concessions out of Brussels.

French officials say engagement with China is the way forward.

Europe sees Trumps more aggressive tactics in the trade war as an opportunity to expand cooperation with China. Europe, for example, viewed Beijing as a potential ally in reining back Trumps all-out assault on the World Trade Organizations court system. Brussels also wants to push ahead with its own agreement with China on the terms of investment.

Macron has voiced fears about a Washington-Beijing deal for some time, and hinted at the risks of such a rapprochement during the G7 summit he hosted in August.

While Macron broadly welcomed a U.S.-China pact, he also insisted at a joint press conference with Trump at the G7 that Europes interests would have to be taken into account. “We will look out to make sure that it is good for the world, and that our parameters are taken into consideration, which was part of our conversations [at the G7],” he said.

That concern will be a main focus of Macrons 48 hours in China. He will kick off his official visit with the China International Import Expo, a trade fair in Shanghai, before holding a day of bilateral talks in Beijing. He is also expected to inaugurate a Shanghai outpost of the Centre Pompidou, a Parisian museum and exhibition centre, as well as discuss issues related to climate change and biodiversity with his Chinese counterpart Xi Jinping. 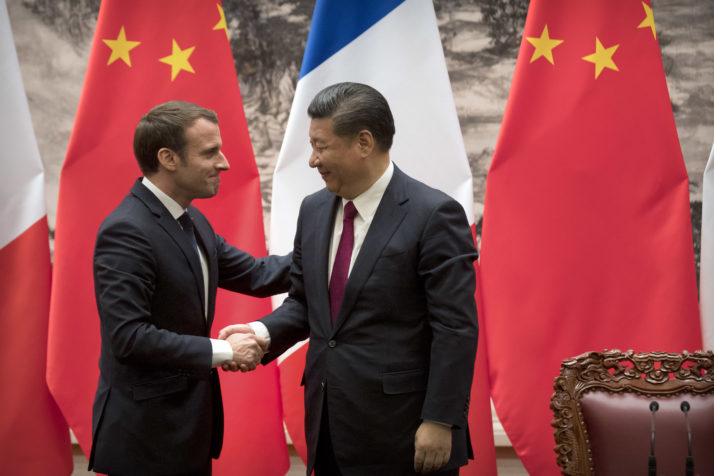 Still, his visit has drawn criticism from some in Europe.

Two EU diplomats complained the Shanghai fair is propaganda aimed at getting the EUs support in the trade war against the U.S. One diplomat wondered why Macron had chosen to go on the trip when other EU leaders had refrained from taking sides in the trade war.

But French officials say engagement with China is the way forward. They also say they are presenting a unified European front by including incoming European Commissioner for Trade Phil Hogan, and the German Minister of Education and Research Anja Karliczek as a representative of Chancellor Angela Merkel, as well as representatives of German businesses, in their visit to the Shanghai fair.

“Our point is that since thiRead More – Source