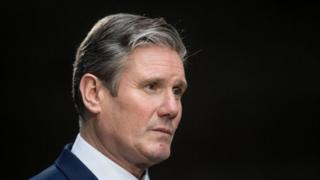 On the eve of their first “virtual” party conference, Labour have unveiled their new slogan: “A New Leadership”.

It replaces “Under New Management”, a phrase Sir Keir Starmer has been using since July, initially at Prime Minister’s Questions, to distance himself from the previous leadership’s position on Russia and national security.

Sir Keir’s strategists feel that this was a little too backward-looking – defining him simply as Not Jeremy Corbyn – and that the new form of words will have wider appeal.

A lot of weight will be placed on the short slogan’s shoulders.

Pleased to meet you, hope you guessed my name…

First, it is designed to contrast favourably with Boris Johnson’s leadership – and build on Sir Keir’s sustained attempt to portray the current government as lacking competence.

Second, it dovetails with Labour’s plan to “introduce” Sir Keir to the country.

This intended phase of his leadership, it is felt, hasn’t been fully realised due to the coronavirus crisis.

And insiders stress his “new” approach won’t simply be different from Mr Corbyn’s – but from Tony Blair and Gordon Brown, too.

He may be helped in this when an internal inquiry – under the chairmanship of barrister Martin Forde, and independent from the party hierarchy – reports later this year.

It is likely to call for a change in the party’s “culture”, with criticisms of both staunch opponents and supporters of the Corbyn era.

This will allow Sir Keir to claim he is making a fresh start.

You’ve got to accentuate the positive

Third, it will be deployed to try to eliminate a negative.

While he may not have been fully introduced to the electorate, the good news for Sir Keir Starmer is that his personal ratings are positive.

That said, for 32% of voters the jury is out – hence the need for Sir Keir re-introduce himself to voters.

The bad news for Starmer is that while he has made a relatively positive impression since becoming Labour leader in March, the party has been lagging behind the Conservatives in most polls.

As one Labour insider put it: “The brand has been trashed.”

The aim now is to bring the party’s standing closer to Starmer’s.

All around me are familiar faces…

So the new branding – which will be used on party platforms and online content – is intended to convey a sense of collective leadership.

The Labour Connected event – the party’s virtual conference – starts on Saturday, and will aim to give a platform to some of the shadow cabinet who are seen as potentially strong performers, including Angela Rayner, Lisa Nandy, and Nick Thomas-Symonds.

There will be major speech from the Shadow Chancellor, Anneliese Dodds.

It’s hoped the new team will become more familiar faces to voters in the months ahead.

So much for the personnel. The late Tony Benn used to say “it’s about policies, not personalities”.

I’m told there will be announcements over the next few days.

But the main purpose of the event will be to set out a vision rather than get dragged into the detail four years from an election.

Although it’s a virtual conference, the party leader will get out and about to deliver his speech on Tuesday.

He will be in Yorkshire – possibly in a seat that survived the Conservative onslaught on the Red Wall, but pretty close to the debris.

He will make it clear that Labour’s task of rebuilding will begin on this territory.

But while regaining the trust of those who, until recently, backed the party is an essential pre-condition for winning power, Starmer knows it won’t be enough on its own.

So seats which to the Conservatives at Labour’s earlier election defeats, such as those in south-east England, will also be his focus.

Hopes of recovery also depend on doing at least a bit better in Scotland, which he visited for the first time since becoming leader this week.

But the more immediate priority is to stem further losses in next year’s Holyrood election.

Although Starmer’s strategists are emphasising fresh, forward-facing leadership, it seems clear that when he delivers his speech, the greatest contrast will be with the Corbyn era.

He won’t be as much waving the Red Flag as the Union Jack.

He will try to convince those who have abandoned the party that their values and his have much in common.

So there will be an emphasis on patriotism.

And the content is likely to be influenced by the Labour leader’s director of policy Claire Ainsley, former head of the Joseph Rowntree Foundation think tank and author of the New Working Class.

She has said values espoused by “working-class” voters span the Remain/Leave divide and can be summarised thus: “Family, fairness, hard work and decency”, or as one commentator put it, “flag, forces, family”.

But she also argues that the nature of “the working class” has changed as the economy has changed, as identity politics – rather than social class – have become more prominent.

The new working class, she says, are more diverse and respond to signals that a political party is “on their side”, rather than appeals to old class labels.

So expect to witness Starmer the signalman in his conference speech.

Some on the party’s left, however, fear that Starmer is on the wrong track.

They see the perspiration – working hard to build up credibility against the Conservatives – but worry about a lack of inspiration.

Others simply want to see more evidence that his talk of “values” is not a precursor to ditching some of the radical policies both he and the party previously espoused.

It will be holding a “virtual rally” of around 2,500 Labour members during the conference.

The group’s secretary, former frontbencher Richard Burgon, told the BBC: “It is important that the party uses the conference to go beyond criticizing the government’s incompetence – and now lays out the policies to defend people hit hard by this unprecedented job and public health crisis.”

Starmer’s supporters say he has a “relentless” focus on winning.

That will mean not just putting the party under new leadership, but about how that leadership is exercised.

So far he has been radical in shaking up his shadow cabinet and in making changes to the party’s backroom operation.

The bigger challenge, in due course, will be in selecting a small number of symbolic policies to signal to voters where he stands – and abandoning others.

His support amongst members appears to be wide, but this process will reveal whether it’s deep.

Keir Starmer’s Conservative opponents have already made up his mind about his leadership.

A spokesman said he “offered the same tired and out of touch politics as Jeremy Corbyn”.

Starmer’s team will be hoping his target voters give him a hearing – and reach a different conclusion in due course.