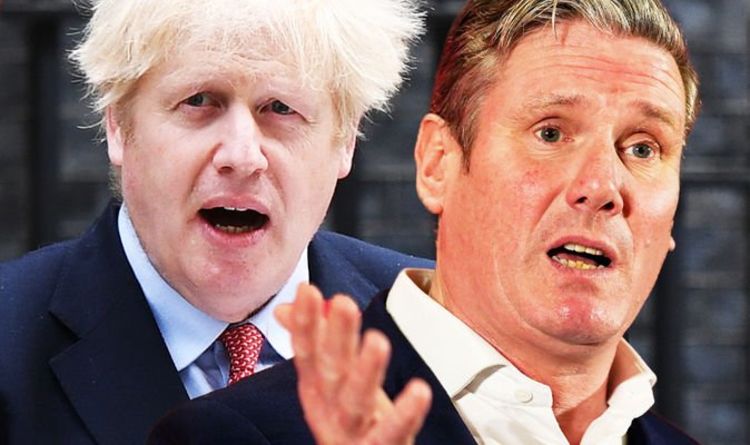 SIR KEIR STARMER has been warned of one key weakness he has strongly displayed so far as leader of the Labour Party, with political experts warning it leaves him at risk of not being taken seriously enough by British voters to topple Boris Johnson as the next Prime Minister.

The former shadow Brexit secretary and Director of Public Prosecutions took over as Labour leader on April 4, but is already faced with a huge uphill challenge to dethrone the Prime Minister from 10 Downing Street. Sir Keir took over a party in utter disarray after Jeremy Corbyn led the opposition to its worst general election performance in 80 years towards the end of last year. The Prime Minister and the Tories secured a massive 80-seat majority in the House of Commons, enabling Mr Johnson to quickly push through his Brexit and provide the party with huge power in any parliamentary votes.
[contfnewc]

Labour saw thousands of voters turn against the party in the general election, losing traditional heartlands and constituencies in the north of England that it had held and relied on for decades.

But crucially, Sir Keir has faced off and clashed with Mr Johnson during Prime Minister’s Questions (PMQs) in the Commons on an almost weekly basis since becoming Labour leader three months ago – with the British public closely assessing his performance.

Sir Keir has been able to question the Prime Minister on the Government’s handling of the coronavirus crisis – which it has been heavily criticised for – from everything on recognising the seriousness of the outbreak early enough, to the national lockdown.

But Wyn Grant, British political scientist and Professor of Politics at the University of Warwick, warned Sir Keir’s task to return Labour to success isn’t being helped by some of the traits he has displayed whilst speaking in the Commons.

He told Express.co.uk: “There is, of course, a mountain to climb, but it needs to be remembered that governments lose elections as much as oppositions win them.

“The Conservative lead has shrunk and voters who switched to them in the Midlands and the North have not become Conservatives overnight. The Government will need to deliver and in particular to avoid an economic slump.

“I don’t think Starmer’s task is impossible, but it is challenging.

“He is competent, but does he have charisma? Behaving like a lawyer in court, such as saying ‘I rest my case’ at PMQs recently lays him open to Boris Johnson’s counter thrusts such as ‘Your witness, Mr Speaker.’

“Focus groups have been telling Johnson that voters see Starmer as much as a lawyer as a politician.”

Political experts have warned the magnitude of the task ahead of Sir Keir to return Labour to the top again is already evident, as he would have to create British political history to topple the Prime Minister and the Tories.

John Macdonald, Head of Government Affairs at the Adam Smith Institute think tank, told this website “Sir Keir has benefited not only in not being Corbyn, but in demonstrating a degree of competency at the opposition dispatch box not seen in a Labour leader for a long time.

“However, no major party has ever increased their number of MPs by over 60 percent, which Starmer would need to accomplish to win in 2024.

“He must neutralise the toxicity at the heart of Labour, create a popular narrative, and build a cohesive electoral coalition.

“To do what no opposition party has done before is no ordinary mountain to climb.”

“Sir Keir is facing a challenge of Everest proportions. Time will tell if he, or another Labour leader, is the one to make it to the top.”

The latest warnings come two weeks after Labour was told it has a “mountain to climb to get back into power in the next five years” in a damning report that laid bare the crumbling leadership of Mr Corbyn and huge challenge facing Sir Keir.

A major report looking at the disastrous general election defeat, put together by Labour Together and prepared by a a 15-strong panel of commissioners, warned the party will “not win” unless urgent and immediate changes to its culture and foundations are made.

Labour Together said: “Labour has a mountain to climb to get back into power in the next five years.

“This report lays out in stark detail the scale of that task. Unless as a party and a movement we face up to that we will not win.

“Labour faces a substantial challenge to win the next election, with a historic swing of over 10 percent needed to gain a majority of one seat.