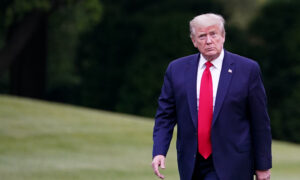 The Justice Department (DOJ) on Wednesday has continued to signal its opposition against changes made to a federal surveillance reform bill that is under consideration in the House, adding that it would recommend President Donald Trump to veto the law if it reaches his desk.

The Senate earlier this month approved the reauthorization of three expired surveillance tools under the USA Freedom Act, a 2015 intelligence law, in a bipartisan vote. The reauthorization bill also contains some changes including some amendments to address deficiencies in the Foreign Intelligence Surveillance Act (FISA) process. The surveillance tools, which need to be periodically renewed, are designed to help law enforcement officials track suspected terrorists and spies.

Assistant Attorney General Stephen Boyd said in a statement that the department opposes the Senates version of the bill as well as House-proposed amendments introduced by Rep. Zoe Lofgren (D-Calif.). The Lofgren amendment would prohibit intelligence officials from collecting Americans internet search history and web browsing data without a warrant.

“If passed, the Attorney General would recommend that the President veto the legislation,” he added.

The DOJs statement is the latest hurdle for the legislation that is expected to be voted on in the House on Wednesday. It also represented a shift in position from March when Attorney General William Barr supported a House version of the bill, which he helped negotiate. That version of the bill was passed in the lower chamber in a 278-136 vote.

“Although that legislation was approved with a large, bipartisan House majority, the Senate thereafter made significant changes that the Department opposed because they would unacceptably impair our ability to pursue terrorists and spies,” Boyd said.

Senators resisted calls from Senate Majority Leader Mitch McConnell to make changes to the bill, and instead approved one amendment with support from three-fourths of the chamber. The successful amendment from Sens. Mike Lee (R-Utah) and Patrick Leahy (D-Vt.) would broaden third-party oversight of the FISA process, in particular, it would require FISA court judges to appoint a third-party observer in any case involving a “sensitive investigative matter,” as long as the court does not deem it inappropriate.

At the time, the DOJ expressed concern over the amendment, saying in a statement that it would “would unacceptably degrade our ability to conduct surveillance of terrorists, spies, and other national security threats.”

Meanwhile, on Tuesday night, Trump pushed back on the bill, urging Republican House lawmakers to vote against the FISA reform bill. The president has repeatedly raised concerns that the Obama administration had allegedly abused the FISA process to improperly surveil Trumps presidential campaign in 2016 and 2017.