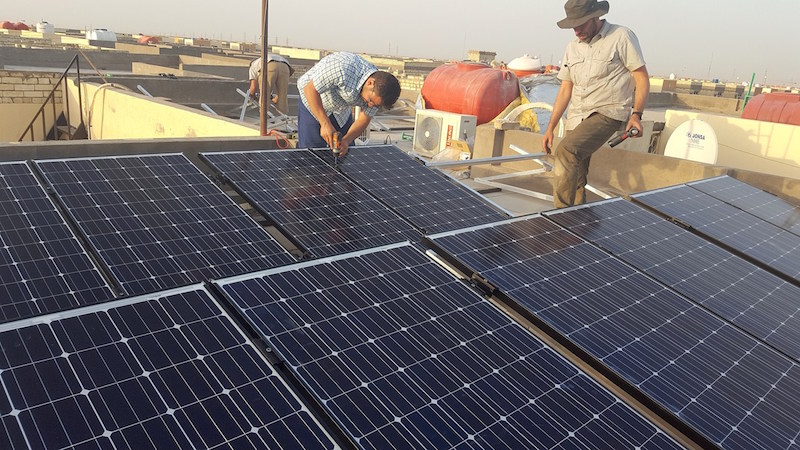 The Ministry of Electricity of Iraq signed a contract with China’s state-owned Power Construction Corporation of China (PowerChina) on Wednesday to build its first solar power plants with a capacity of 2,000 MW, Asharq reported.

This was one of the first such projects in the country and would supply the system with clean, renewable energy, Iraq’s prime minister Mustafa Al-Kadhimi said on a blog.

The first plant will have a capacity of 750 MW. The country will add more plants until it hits the 2,000 MW target.

The Ministry of Electricity did not mention when production would begin.

Although Iraq is the second largest oil producer among the OPEC nations, it imports electricity from Iran.

Iraq has been exploring ways of becoming less reliant on energy imports, especially following increasing pressure by the US to loosen ties with Tehran.

Early in August, the US State Department granted Iraq another sanctions waiver allowing the country to import Iranian electricity until the end of this year.

Al-Kadhimi had said he wants to see his country generating electricity from solar energy.

Iraq’s Oil Minister Ihsan Ismail told Asharq earlier that his country will award solar power projects until 2025 to generate 10,000-12,000 MW, which make up around 25 percent of its power needs.

The two sides announced June 25 that Iraq’s agreement with Masdar includes the development of at least 2 GW of solar projects in the country.

Iraqi officials said the agreement would help further the country’s goal of generating 20%-25% of its energy from renewables, equivalent to 10-12 GW by 2030.

In March, Iraq signed an agreement with TotalEnergies to build a 1 GW solar power.

Iraq is also seeking to import power from Jordan, Turkey, Saudi Arabia and grid of the six-member Gulf Cooperation Council.