BERLIN — As Germany’s Social Democrats (SPD) explore another coalition with Angela Merkel’s conservatives, party leaders are looking for a big policy victory to prove to their base that it’s worth the trouble.

That’s why they’re so insistent on reforming the German health insurance system — by creating a Bürgerversicherung, or “citizens’ insurance” scheme, under which all Germans would be automatically insured.

The SPD slumped to its worst ever result in last September’s general election after four years as Merkel’s junior partner, so party leaders and activists are wary of reprising that role. As they hold talks with the conservatives this week, an overhaul of Germany’s health insurance system is sure to be one of the major sticking points.

“As a Social Democrat, I work to ensure all people can share in medical advances,” said Bärbel Bas, an SPD lawmaker in the party’s health working group. “Citizens’ insurance would make the health system fairer, so no one in old age has to fear unaffordable premiums or poorer care.”

The SPD has advocated for some form of citizens’ insurance for more than a decade, seeing it as key to social democratic core values; some in the party even suggested last month that citizens’ insurance should be a precondition for talks with the CDU/CSU bloc (though they’ve since backed down from that idea).

Germany’s current health insurance system, which has structural roots as far back as the late 19th century, insures people in two distinct ways: through statutory public health insurance and private insurance. The SPD says this creates a two-tier setup, with wealthy people not contributing enough to the overall health system, to the detriment of the poor. 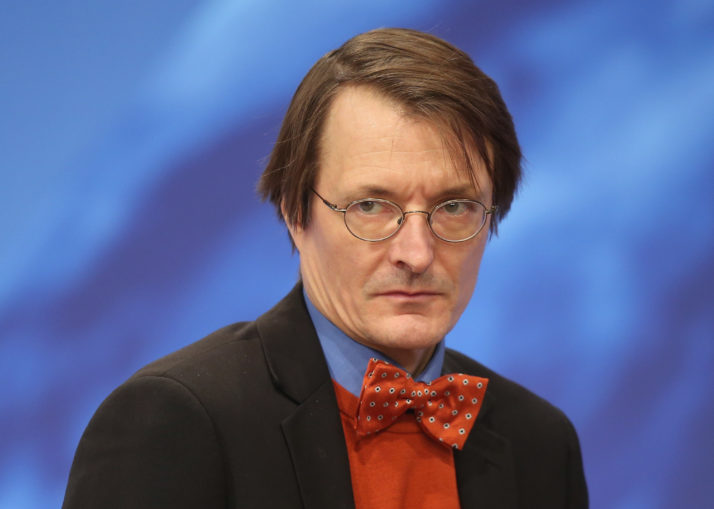 “We want all people in Germany to be insured in the same way, and to introduce a citizens’ insurance,” the SPD’s top leaders wrote in a four-page catalog of conditions last month. Long-time SPD health reform advocate Karl Lauterbach told the Bild am Sonntag newspaper it is the party’s “duty to our constituents to implement this.”

Merkel’s conservatives, however, have consistently opposed the SPD proposal — and the idea has major opponents in the private insurance industry, which brought in €37 billion in premiums in 2016 and could stand to lose much of its business if the SPD gets its way. And last week, representatives from some of the statutory insurance providers also came out against the plan.

“For many years in Germany public insurance and private insurance have coexisted,” said Rudolf Henke, a CDU MP and long-time doctor who focuses on health issues in the Bundestag. “And the public insurance companies have record surpluses, they’re financially and qualitatively well-placed … we are pretty well taken care of in Germany.”

Right now, roughly nine in 10 Germans are insured under the statutory system, the default option, in which they and their employers split the cost of premiums equally. This insurance is managed by more than 100 Krankenkassen, or health insurance funds, which together brought in more than €200 billion in premiums in 2016.

The remaining 8.8 million people, or just over 10 percent of the population, are insured by one of Germany’s several dozen private insurance companies — either by choice or because of their professions. Civil servants and freelancers are covered through private insurance, and those earning over a certain amount (€57,600 per year in 2017) can choose between statutory insurance and private insurance.

Though a relatively small proportion of the country’s overall population holds private insurance, their typically higher premiums come with perks such as shorter waiting times and a wider range of choice in doctors. And since doctors get paid significantly more for treating private patients than statutory ones, many doctors prefer to take private patients.

“Whenever you say you are privately insured, the doors are open, you have immediate access and you get very thorough and very careful attention,” said Klaus Hurrelmann, a professor at Berlin’s Hertie School of Governance. “[Doctors] get two to three times as much money for you, so it is really highly attractive to have people who are privately insured.”

The SPD argues that this discrepancy in privileges and available services is inherently unequal, giving unfair advantages to those who are able to pay more for them. What’s more, it is very difficult for people to switch from private insurance to statutory insurance, meaning they have few alternatives if their premiums rise.

The issue is an encapsulation of the party’s core values of equality and social justice, which is part of why it’s so high on party leaders’ list of demands.

Bürgerversicherung “is a very crucial and also an emotional thing for the social democratic family, not only for the party but for trade unions, and for all the left parties,” said Severin Schmidt, a social policy expert at the Friedrich Ebert Stiftung, the affiliated political foundation for the SPD.

Under the SPD’s proposal, the country would eventually eliminate the use of private insurance as primary insurance, automatically placing all Germans into a single “citizens’ insurance” system, regardless of what kind of plan they’d chosen before. Their premiums would be based on income, rather than on age or medical history.

The “citizens’ insurance” would largely look like today’s statutory insurance, but with some provisions to ensure more equal treatment: doctors would receive the same fees for all patients, for example, and employers would pay half an employee’s premium regardless of the amount.

They would start this process — which experts say is a decades-long endeavor — by moving civil servants and freelancers into the existing statutory system, then eventually bringing in other remaining private patients as well. People could still choose to purchase supplementary insurance on top of their primary plan, which would fund extras like private rooms during hospital stays or certain non-covered types of care.

In a position paper on the issue, the SPD’s Lauterbach said “the restructuring of the system is a process” and private insurance companies wouldn’t be entirely eliminated. Instead, they could either opt to offer citizens insurance — in the way the Krankenkassen now offer statutory insurance — or move toward offering supplemental insurance plans.

The CDU, however, opposes the overall idea of citizens’ insurance even if it is open to potential improvements to the existing health care system.

“For me, this concept of ‘citizens’ insurance’ that the SPD presents doesn’t bring any advantages over what we have now.” — Katja Leikert, a CDU MP

Members of the CDU say the current system actually works well for most Germans, and that such a huge overhaul would cause more problems than it would solve. And the plan’s opponents also worry that decreased competition in German health insurance could drive up premiums and bring down the overall quality of care.

There’s also the question of how such a big shift would comply with German laws and the constitution, making future legal battles likely if the SPD’s proposal were to be implemented. Another major issue is what would happen to the collective €233 billion in surplus funds private insurance companies have built up to cover the care costs of Germany’s aging population.

“For me, this concept of ‘citizens’ insurance’ that the SPD presents doesn’t bring any advantages over what we have now,” said Katja Leikert, a CDU MP who is a member of the party’s health policy group. “So I’m not convinced … I have taken a close look at this and truly can’t understand [why it would be better].”

Though it seems unlikely that the SPD will score an outright victory on the issue, there are signs a compromise might be possible: Merkel reiterated last month that the CDU is “against” such a system, for example, but suggested “a variety of improvements” could be on the table.

One possibility is that the two parties agree to part of the SPD’s proposal but stop short of actually doing away with private insurance. They could negotiate over equalizing doctors’ fees for statutory and private patients, or could begin the process of bringing more people into statutory insurance by shifting over civil servants and freelancers from private insurance.

Leikert, the CDU MP, named the latter as an example of a possible compromise in the coming negotiations.

“You can say, for example, that all civil servants should come onto the statutory health insurance,” she said. “You can do it, sure — I find that as a politician, you always need to be ready to compromise. And if that’s the price of having a stable government, you can also share the price.”