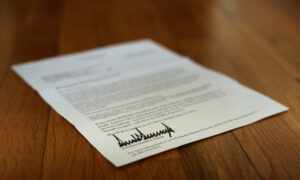 The House of Representatives late Friday voted against a motion that would have prevented anyone without a Social Security number from receiving the government payouts approved in a recent stimulus package.

Under the bill, most Americans have already received $1,200.

Illegal immigrants and others without a Social Security number would have been prevented from receiving the payment if the motion to recommit passed, but it was narrowly defeated 209-198.

All Republicans present voted for the motion, as did 13 Democrats.

No Republicans voted against the motion, but Rep. Justin Amash (I-Mich.), a former Republican, did.

Twenty-three members did not vote. Those who missed the vote were about equally divided between parties.

Rep. Denver Riggleman (R-Va.), who offered the motion, said he did so because the House bill members were about to vote on included a provision that would change the identification requirement for the government payouts from Social Security number to taxpayer identification number.

“This switch will let illegal immigrants and non-citizens get checks they arent eligible for,” he said.

“Now, more than ever, we need to make sure these rebate checks go to Americans who need it,” he added later.