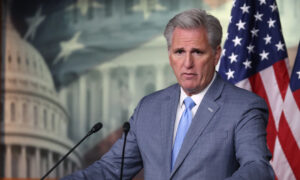 In their latest effort to end proxy voting a group of House Republicans on Thursday introduced a bill, “No Pay for Proxy Voting Act,” which would hold up pay for those members who choose to vote by proxy.

Led by Rep. Tedd Budd (R-N.C.) the legislation states (pdf) that for each day that a member elects to vote by proxy or have a proxy record their presence in the Chamber for a quorum call, the Houses Chief Administrative Officer “will withhold a days worth of pay and deposit it into an escrow account.”

At the end of the Congress, the pay would be returned to the representative, because under the 27th amendment its considered unconstitutional to withhold members pay.

“Outsourcing the duty of a member of Congress is unconstitutional and wrong. House members should not be allowed to send someone else to do their jobs for them,” Budd said in a statement.

“In the real world, if you dont show up for your job, you dont get paid. The same principle should apply to our countrys representatives. If they dont come to work, they shouldnt receive their taxpayer-funded paycheck.”

The House rules change has been controversial since being passed in early May. Democrats and Republicans have been split about the constitutionality of proxy voting.

Democrats argue the measure is necessary to protect the health of members and staff during the crisis, while Republicans oppose the change because they say it breaks from tradition and gives too much power to certain members.

“House Democrats have already taken advantage of their proxy voting scheme. This is an abuse of taxpayer dollars. Hardworking Americans should not have to pay the price for this unconstitutional power grab,” Rep. Alex Mooney (R-Md.) said Friday.

House Committee on Rules defended proxy voting Friday saying, “Schools, businesses, and governments around the world have all adapted during this health crisis. Thats why @HouseDemocrats have implemented remote voting during this pandemic: because protecting public health is our top concern.”

Meanwhile, House Minority Leader Kevin McCarthy (R-Calif.), who filed a lawsuit against proxy voting, said Thursday, “Nearly a third of House Democrats didnt show up for work this week. But theyll still get a paycheck. A couple even lied so they could travel across Florida for a rocket launch. This should outrage everyone—including the 50 million Americans who were without representation.”