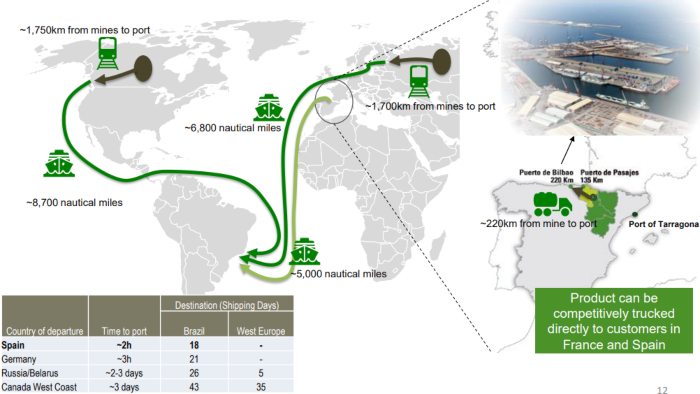 Highfield Resources Ltd (ASX:HFR) (FRA:23H) is confident that its Muga Potash Mine in Spain is in a five-star location, close to premium European agricultural markets.

Muga will have access to excellent existing infrastructure with product able to be trucked directly to customers in France and Spain – a competitive cost advantage considering there are no European import duties to other EU countries.

The project is also well-positioned to cater for the Brazilian market, with low freight costs providing a logistical advantage over other MOP producers.

Global potash demand increased 25% from 2012 to 2019, however, global production was cut by 2 million tonnes in 2019 due to increased stock levels.

Additionally, the Wintershall mine in Germany has restricted production due to low river levels.

This has tightened local supply and high-cost local producers have maintained the European price premium on potash, even during the temporary COVID-19 disruption.

Given Mugas location, the company expects a large part of the regional premium will be captured at the mine.

It is also well positioned to cater for the forecast 2.5% per annum increase in potash demand globally, reflecting the increased need for higher crop yields and fertilisers as arable land per person decreases and the population increases.

The demand for salt, which is produced as a by-product of processing potash, is also forecast to grow with the worlds population expected to rise to 9.7 billion by 2050.

The sale of the salt will also have economic benefits for the Muga Project financials and will help maintain a low environmental footprint by ensuring full compliance with environmental conditions – specifically the removal of all salt from surface as part of the mines rehabilitation post-potash production.

In September last year, Highfield signed a non-binding memorandum of understanding (MOU) with Ameropa AG, a Swiss-based agri-business, for the sale of 250,000 tonnes (with the option to increase to 300,000 tonnes) of MOP from Muga.

The company also signed a non-binding MOU in February of this year with Keytrade AG for the sale of 300,000 tonnes of MOP.

Highfield believes that these future potential partnerships will provide an enhanced understanding of the MOP market and logistical expertise that will be invaluable in the first years of production.

Additionally, in April, Highfield signed a non-binding MOU for the sale of up to 500,000 tonnes of salt per annum.

The agreement is between Pardira Premium SL, trading as Maxisalt, and Highfield's wholly-owned Spanish subsidiary Geocali SLU, and comprises 400,000 tonnes of vacuum salt and 100,000 tonnes of de-icing salt.