Williamson was booted out of Cabinet earlier this month after being accused of leaking confidential information from a top security briefing to the Daily Telegraph.

Since his firing, Williamson has attacked the Prime Minister and branded her “politically naive” for beginning Brexit talks with the Labour Party.

But it apparently isnt the first time the former top Tory has lashed out.

In 2016 – when Williamson was Chief Whip – he allegedly told other MPs May was a “charisma free b***h”, The Sun reports. 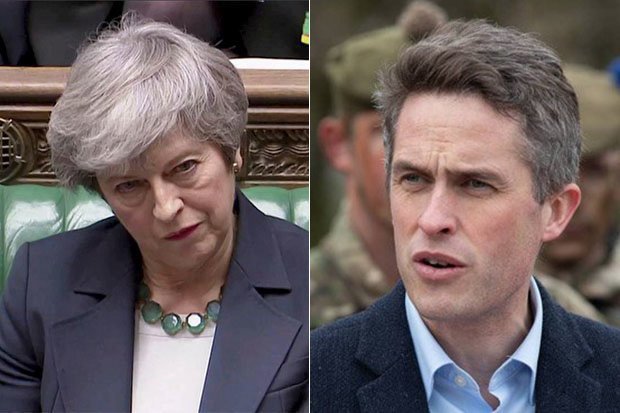 UNLEASHED: Williamson has attacked the Prime Minister since his firing (Pic: PA/GETTY)

The reports are unconfirmed and Williamson is said to have denied using the B-word.

Williamson – Conservative MP for South Staffordshire – was replaced as the head of the Ministry of Defence by international development secretary Penny Mordant after his ignominious departure two weeks ago.

Williamson was listed in the Telegraph as being among a small group of ministers whose warnings about Huawei's involvement were overruled by the Prime Minister at a National Security Council meeting.

OUTRAGED: He vehemently denied being involved in a top-secret security leak (Pic: GETTY)

May is reported to have given the green light for Huawei to provide "non-core" elements of the UK network.

Williamson denies he was the source of the leak and "swore on his children's lives" that it was neither him nor his staff.