BERLIN — A gunman livestreamed his attack on a German synago..

BERLIN — A gunman livestreamed his attack on a German synagogue. A local lawmaker was shot. Hundreds of thousands of people filed complaints about digital abuse to Google, Facebook and Twitter.

In the almost two years since online hate speech rules came into force in Europes largest economy, Berlin has failed to successfully clamp down on harmful online content despite tough sanctions — including €50 million fines against tech companies for failing to respond quickly enough — that have become the global regulatory playbook for countries from France to Singapore.

In proposals published Wednesday, Angela Merkels government announced new measures to force social media platforms to proactively report illegal content such as death threats or incitement of hatred on their platforms to law enforcement. That follows complaints that it takes too long to follow up on harmful content because police must wait until people file official charges.

Berlin will also create a new federal police unit to handle the submissions, and companies will be required to hand over the IP address, or online identifier, of those publishing hateful material.

“Theres momentum in Europe and governments are moving towards greater regulation” — David Kaye, U.N. special rapporteur on freedom of expression

“Were devastated by the most recent events this year,” German Justice Minister Christine Lambrecht told a news conference Wednesday, referring to the murder of a regional politician by a suspected neo-Nazi in June as well as the shooting rampage outside a synagogue and kebab shop earlier this month that was streamed online and left two dead.

“But we cant just stop at being devastated,” Lambrecht added.

Berlins renewed push — the countrys parliament still has to vote on the hate speech proposals — again puts the country at the global forefront of efforts to force the likes of Facebook and Google to take greater responsibility for what is published on their networks.

French lawmakers will debate similar hate speech rules to those already on the books in Germany next month, European Union officials are calling for greater regulation of online speech and U.S. politicians now acknowledge that the current rules are not fit for the digital age. 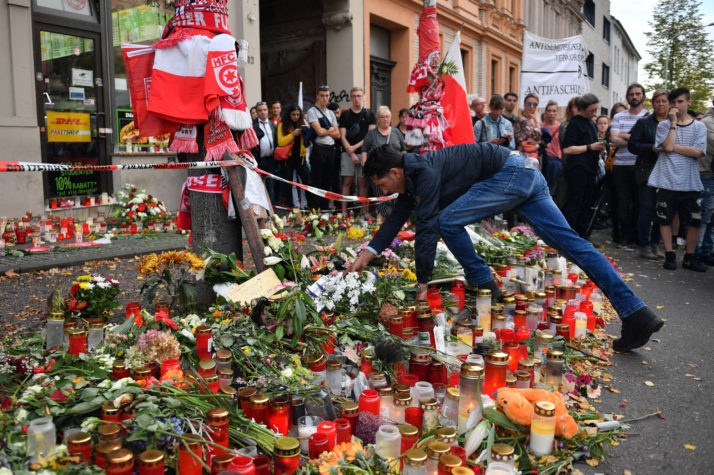 A man lays down flowers at a makeshift memorial for the victims of a shooting during an attack targeting a Turkish restaurant after an attempt at a synagogue, on October 13, 2019 in Halle, Germany | Hendrik Schmidt/AFP via Getty Images

At stake is the balance between protecting people from digital harm and allowing others to express themselves freely online, as well as what role governments should take in setting rules that often span national borders.

“Theres momentum in Europe and governments are moving towards greater regulation,” said David Kaye, the United Nations special rapporteur on freedom of expression. “Whatever Europe does will have a big impact.”

When Germanys online hate speech rules, known locally as NetzDG, came into force early last year, Facebook, Google and Twitter were in the spotlight after failing to halt a series of online attacks that often targeted those who had supported the countrys open-door migration policies.

While other EU governments and the European Commission initially favored voluntary rules, Berlin instead rushed through wide-ranging legislation after a government report showed that both Facebook and Twitter had failed to remove illegal material within 24 hours of being notified by users. Googles YouTube was the only platform to meet Berlins target of quickly deleting almost all hateful material over a one-day period.

Over the last two years, all three social media companies (encrypted internet messaging services like WhatsApp and Telegram are exempt from the rules) have rejigged their systems to now meet the 24-hour deadline. But campaign groups say not enough has been done to stop hate speech from being shared widely online, and Facebook was fined €2 million earlier this year for failing to be adequately transparent about complaints of illegal material. The company is appealing.

A Facebook spokeswoman, however, did confirm the company was working with German law enforcement to speed up their access to users information in hate speech cases. Those changes were expected to come into force in the coming weeks.

While German lawmakers agreed more needed to be done to prosecute those who share illegal content, they remained divided over details.

As soon as the hate speech rules were passed, the political parties that make up Germanys coalition government promised to give the law a makeover.

But while German lawmakers agreed more needed to be done to prosecute those who share illegal content, they remained divided over details. A push by Merkels conservative bloc to grant law enforcement additional, far-reaching access to information held by platforms, for instance, was eyed warily by their junior coalition partner, the Social Democrats.

Those discussions heated up in the summer after a suspected neo-Nazi assassinated Walter Lübcke, a regional politician who had been a vocal proponent of Germanys refugee policies. Later, it was revealed that the suspect had posted “people will die” before the murder.

Earlier this month, that attack was followed by a heavily armed man live-streaming a shooting rampage outside a synagogue in eastern Germany on Twitch, a digital gaming platform owned by Amazon, which mirrored the storming of two mosques in New Zealand earlier this year, which resulted in the deaths of 51 people.

In response, most of the largest digital platforms have signed up to the so-called Christchurch Call proposals to limit the spread of terrorist material online, though the proposals remain voluntary.

“Twitch has a zero-tolerance policy against hateful conduct, and any act of violence is taken extremely seriously,” the company said in a statement. “We worked with urgency to remove this content and will permanently suspend any accounts found to be posting or reposting content of this abhorrent act.” 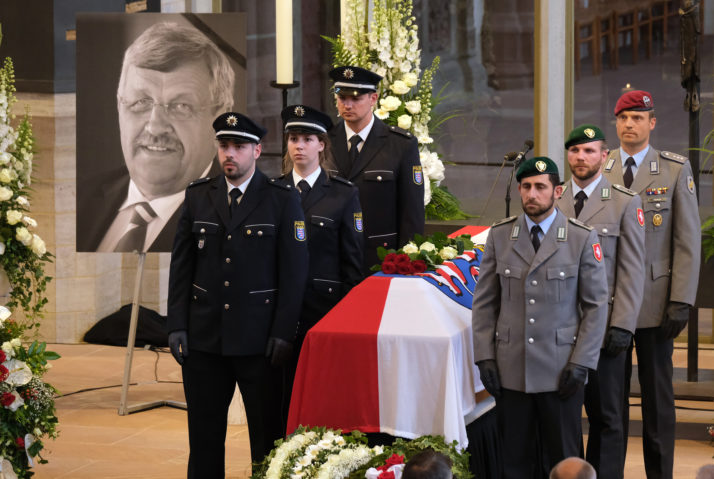 An honor guard stands at the coffin Read More – Source