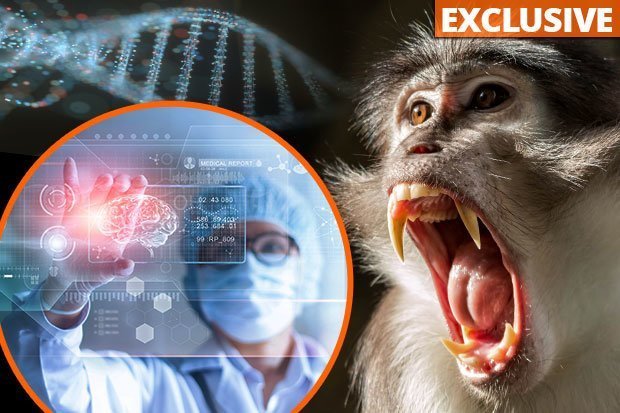 In the past year, two cases have shocked the world, after Chinese scientists put human genes in monkeys and genetically modified human embryos, which were later born as live babies.

One of the scientists who attended the conference in China, where the world learned of the mutant babies, says CRISPR means gene editing projects that once took three years can now be done in thee weeks.

Furthermore, a different attitude to animal welfare in China and other nations could make mutant creatures even more likely, Dr Pete Mills, the Assistant Director of the Nuffield Council on Bioethics, said.

“I think [the Chinese] certainly have a slightly different attitude toward large animal research… that makes it somewhat easier [to do primary research on large animals] than it would be elsewhere,” he said.

REVEALED: The specific monkeys used in the test how now been pictured (Pic: GETTY)

Assistant Director of the Nuffield Council on Bioethics

“China seems to be a little bit more relaxed about that kind of thing,” he adds, whilst stressing that permissive attitudes do exist elsewhere.

For example, the Argentinian firm Kheiron-Biotech is editing the genome of racehorses to make breeds that are faster and stronger and scientists at Harvard are even working on bringing back the woolly mammoth with the help of CRISPR.

Gene editing in the past, Dr Miller says, was the sort of experiment that only leading scientists with huge amounts of resources could do.

Such experiments would likely need the support of governments and major universities, which would ensure there was proper scrutiny.

However, producing the gene-edited humans with CRISPR, he said, was “something that a reasonably competent scientist with some fairly standard laboratory facilities could potentially do.”