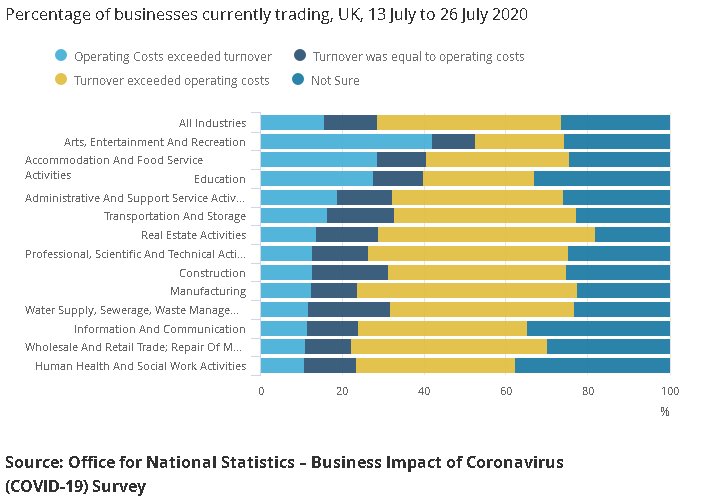 FTSE 100 index closed in the red on Thursday as investors fretted about the future of the UK economy.

Joshua Mahony, a senior market analyst at spreadbetter IG, noted that traders were looking ahead to a "double whammy of resurgent Brexit fears and an October end to the furlough scheme".

"With stocks coming off a strong run, today provides a breather despite an impressive jobless claims report out of the US."

On the foreign exchange markets, the pound added 0.38% against the US dollar.

Acasti Pharma Inc (NASDAQ:ACST) (CVE:ACST) looking forward to the unblinding of its TRILOGY 2 trial data around end of this month

Algernon Pharma (CSE:AGN) (OTCQB:AGNPF) enrolls first patient from the US for multinational Phase 2b/3 coronavirus study of Ifenprodil

Perma-Fix Environmental Services Inc (NASDAQ:PESI) appoints former Commanding General of the US Army Corps of Engineers to its board of directors

US equities opened mixed after an encouraging set of jobless numbers.

Graph showing unemployment in the US empire in recent years. ????

Earlier, the Bureau of Labor Statistics revealed that initial jobless claims dipped below 1mln for the first time since March when the coronavirus (COVID-19) started to have an impact on the US economy.

As is often the case, what appears on the face of it to be good news can be interpreted (in a stock market context) as bad news, with some pundits suggesting that a rapidly improving employment situation could lead to less urgency in lawmakers agreeing on a new COVID-19 relief package.

1.45pm: US first-time jobless claims fall below a million

First-time jobless claims in the US last week declined to 963,000 from 1.19mln the week before.

It is the first time since March that the number of new claims has dropped below the million mark.

The numbers have caused the US stock market index series on spread betting sites to perk up.

The S&P 500 is trading at around 3,378, down a couple of points from last nights close and about eight points firmer than the quotes were circa 1.00pm.

1.15pm: US indices to give back some of yesterday's gains

US indices are expected to open lower as doubts grow over a resolution to the impasse over the next coronavirus relief package.

last week, the averages rallied because Investors were confident that another Stimulus Package was a done deal, now this week there is a stalemate in Washington and that New Cash Infusion ain't coming anytime soon and the markets rallied anyway?

The strength of sterling is adding to the Footsies woes this afternoon.

The pound was up by three-quarters of a cent against the greenback at US$1.3106 after Britains chief Brexit negotiator, David Frost, said a deal with the EU could be reached next month.

Frost also said the UK is not looking for anything that threatens the integrity of the EUs single market.

11.30am: Footsie's rally running out of steam

The FTSE 100 bottomed out at about 9.30am but the rally looks like it is losing steam.

While blue-chips move into idling mode, investors have the chance to view the latest statistical bulletin from the Office for National Statistics on the coronavirus and its effect on the economy and society.

In a survey of businesses, 29% of those currently trading said that their operating costs exceeded or were equal to their turnover.

Out of those businesses currently trading, 6% of the total workforce had returned to the workplace from furlough in the last two weeks and 4% had moved from remote working to the normal workplace.

Our latest economic and social impact indicators have been published today as part of our response to the #coronavirus #COVID19 pandemic https://t.co/qq531CrC8K pic.twitter.com/FBoCgtAhFw

On the social side of things, the proportion of adults wearing a face-covering in the previous week at some point when leaving the home remained at 96% for the second consecutive week.

The IEA cited the tribulations faced by the airline industry as a “major source of weakness” in the oil market.

The market evidently decided that the IEAs guidance was only playing catch-up with what the market had already factored in as the price of Brent crude for delivery in October rose 10 cents (0.2%) to US$45.53 a barrel.

The global benchmark for oil prices is back at levels last seen since early March before the coronavirus prompted lockdown restrictions in much of the world.

Housebuilders continue to defy the trend after a survey by the Royal Institution of Chartered Surveyors (RICS) indicated UK house prices recovered in July.

“Todays RICS statistics reveal the UK housing market gained further momentum last month which showcases the ongoing recovery – something were all happy to hear after a turbulent few months,” said Ross Counsell, a director at property buyers Good Move – although you wouldve thought a property buyer would prefer to see prices fall.

“We have seen an increase in new buyer queries, as well as a rise in new listings and sales,” he added.

National Express, down 13% at 153.4p was the biggest mid-cap faller after its half-year report, closely followed by Renishaw, the machine tools specialist, which was off 11% at 4,706p.

Former FTSE 100 stock TUI, the package tours operator, does not look likely to return to the top-flight anytime soon judging by its fiscal third-quarter results, the release of which prompted a 5.0% fall to 348.8p.

“No surprises that TUI was devastated by Covid-19 in its third quarter from April to June. It is, nonetheless, shocking to see the scale of the holiday industry shutdown in the period. Revenues fell by 98%. TUI is in full-on survival mode this year and next, with fresh funds from the German government secured this week to tide it over to what it hopes will be more normal conditions in 2022,” said Tom Stevenson, an investment director at Fidelity Personal Investing.

“Bookings for the rest of this summer are down 81% so the reduction in capacity for the coming winter of 40% and for next summer of 20% makes some possibly heroic assumptions about the avoidance of second and third waves. What TUI really needs is a vaccine,” Stevenson quipped.

“TUI is potentially a case study in how crises ultimately consolidate industry power in the hands of the strongest brands but investors are rightly not counting on that positive outcome just yet. The shares have fallen from nearly £18 two years ago to under £4. They remain highly speculative,” he opined.

9.20am: Housebuilders defy the trend after latest RICS survey

Housing demand recovered in July, according to the survey by the Royal Institution of Chartered Surveyors (RICS), helped by the temporary suspension of stamp duty.

“Prices are defying gravity for now because few homes are on the market; just 41 properties were on the books of the average estate agent in July, well below the 55 average of the 2010s,2 noted Samuel Tombs, the chief UK economist for Pantheon Macroeconomics.

“Nonetheless, distressed sales have been contained because the Coronavirus Job Retention Scheme has protected temporarily the income of surplus workers while struggling borrowers have easily obtained payment holidays, which can last for up to six months. By the winter, however, this policy support will have rolled off and the current imbalance between demand and supply will unwind. We continue to look for a 3% peak-to-trough fall in house prices, though we expect the low-point not to materialise until the summer of next year,” Tombs said.

Housebuilders were among the relatively small number of blue-chips defying the weak trend this morning, with Berkeley Group Holdings PLC (LON:BKG), Barratt Developments PLC (LON:BDEV) and Persimmon PLC (LON:PSN) notching up gains of around 0.4%.

The stamp duty holiday played a significant role in the recovery of the residential market but these gains may be short-lived as government support measures taper off, a RICS monthly residential market survey has revealed.https://t.co/fE5Z10jFdQ

The FTSE 100 index opened in negative territory on Thursday with a degree of profit-taking at play. However, the economic realities of lockdown and the potential damage from a second wave of coronavirus infections were also starting to haunt traders thinking, analysts said.

The index of UK blue-chip stocks fell 54 points to 6,225.69 in early trade. A host of mega-companies trading without entitlement to dividend payments (yes, they still exist) clipped around 22 points from the index, so the underlying decline was a little less steep than it seemed at first appearance.

Among those going ex-div were drugs giants AstraZeneca (LON:AZN) and GlaxoSmithKline (LON:GSK), down 1.1% and 2.4% respectively, and oil majors BP (LON:BP.) and Shell (LON:RDSA), which were off 1.5% and 1.1%. Life and pensions consolidator Phoenix (LON:PHNX) was the biggest casualty with a 3.9% drop.

One of the mornings biggest early winners was Watches of Switzerland (LON:WOSG), which advanced 24% after it said it had returned to sales growth.

Annuities specialist Just Group (LON:JUST) received an 11% boost on the back of a slightly better than expected earnings read-out.

Finally, shares in coach and train operator National Express (LON:NEX) hit the brakes as they skidded 12% lower on a sombre reflection on current trading trends which was suggestive of a slow recovery for the group.

Bahamas Petroleum Company PLC (LON:BP.) has told investors it is making rapid progress as it familiarises itself with its newly expanded portfolio of assets following the recent acquisition of Columbus Energy. The company provided a new corporate presentation to communicate its new strategy, which chief executive Simon Potter highlighted that the benefits of BPC's portfolio are already being felt. "We are making rapid progress on familiarising ourselves with the potential of our recently expanded portfolio of assets,” Potter said in a statement.

Personal Group PLC LON:PGH), a leading provider of employee services in the UK, has announced that its third dividend for 2020 of 5.9p per share will be paid on September 25, 2020, to holders on the register as at August 21, 2020, and the shares will be marked ex-dividend on August 20, 2020. As detailed in the company's trading update on August 7, while acknowledging the impact that the outbreak of the coronavirus (COVID-19), and the associated societal changes, hRead More – Source
[contf]
[contfnew]