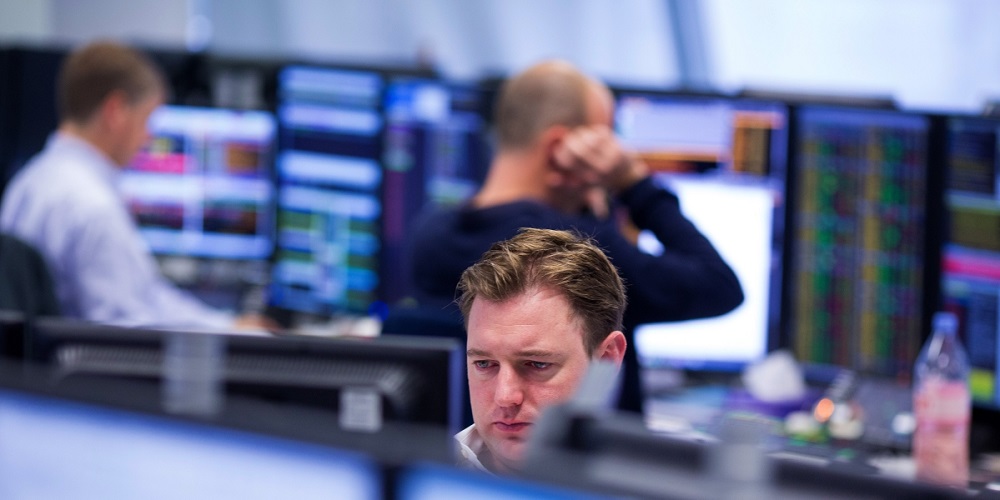 FTSE 100 index closed in positive territory on Friday but gave up earlier gains as US markets tanked on fears that states would have to go into lock-down again amid rising virus cases.

Over the week as a whole, the benchmark index lost around 2%, dropping from 6,292, where it started on Monday.

"Stocks lost ground this afternoon due to health concerns in the US. The FTSE 100 is still up on the day, but it has handed back much of its gains as the US markets are weighing on sentiment," said David Madden, market analyst at CMC Markets.

"Today, it was revealed that Texas will order bars to close as hospitals are under pressure from coronavirus cases. The development in Texas is worrying because re-imposing restrictions could become the norm," he added.

US markets have opened sharply lower as bank shares are eschewed following the latest directive on dividend caps from the US central bank.

Banks were under pressure after the Federal Reserve put a limit on dividend payouts by banks and forbade them to buy back any shares in the third quarter.

One of the index's banks, HSBC (LON:HSBA), is slightly in the red as it confirmed the plan to make 35,000 job cuts around the world was resuming, having temporarily halted the redundancies in March because of the coronavirus pandemic.

As widely expected, shopping centres owner Intu Properties PLC (LON:INTU) has thrown in the towel and called in the administrators. Trading in the companys shares have been suspended.

1.55pm: Tesco shareholders get the hump with "Drastic" Dave's remuneration

Shareholders gave a big thumbs down to the executive rewards scheme at the annual general meeting of supermarket giant Tesco PLC (LON:TSCO).

More than two-thirds of votes were cast against accepting the remuneration report, which included a pay rise by more than third to £6.42mln to chief executive officer “Drastic” Dave Lewis, who is on his bike soon anyway.

Although the vote was a decisive one, the board of Tesco can – and probably will – ignore it.

It appears that a number of shareholders were miffed that the committee had decided to remove stock market star and sector peer Ocado from the equation when calculating the rewards.

"We are disappointed that the advisory vote on the directors remuneration report was not passed," Tesco said.

“Following recent engagement on our Remuneration Report with a number of our larger shareholders, we have been reassured that the majority agree that the overall outcome of the 2017 PSP award is proportionate given the outstanding turnaround delivered by management,” the company said in a statement.

“We recognise, however, that a significant number of shareholders had concerns with the principle of the committees adjustment to the TSR comparator group,” it added. (Read more here.)

Londons index of leading shares looks to be in consolidation mode in lunchtime trading after a very satisfactory morning.

The FTSE 100 was up 103 points at 6,250, after the Chancellor of the Exchequer, Rishi Sunak, hinted in an interview with Bloomberg TV that he may yet have more things in his locker to throw at the problems afflicting the UK economy.

“Obviously the government can do things to help with the recovery. The prime minister will be making a speech later as well. I will be outlining further things in the coming weeks,” he told the news agency.

#Sunak – “The bar for companies accessing taxpayers support in a bespoke and significant way is extraordinarily high and should be extremely rare” Any such support would come with “significant strings attached”. https://t.co/gI8uj1k2Op

Across the pond, investors are in a more cautious mood as the rate of new coronavirus cases continues to rise.

“There is no doubt that the second coronavirus wave news has been glum and it may maintain this narrative for some time but the fact is that smart money does see the Texas governors recent action of halting the further re-open efforts as a positive sign,” said Naeem Aslam, the chief market analyst at AvaTrade.

“For them, this is the step in the right direction to stamp out the current spike in Covid-19. Measures like this have put an end to the drumbeat of coronavirus news,” he added.

Back in London, the FTSE 250 is faring less well than the FTSE 250 despite a warm reception given to the updates to online casino operator 888 Holdings PLC (LON:888) and engineering company Weir Group PLC (LON:WEIR).

It is clearly, to use the stock market jargon, a “risk-on” day, with investors encouraged by yesterdays results of the Feds banking stress tests.

“After the close of trading in New York last night, the Federal Reserve issued the results of the banks stress test, and by and large they are in good shape,” reported CMCs David Madden.

“When the central bank ran an extreme pandemic related scenario, a number of banks came close to the minimum capital requirement. Banks dividends will be capped at their current levels. Traders reacted well to the news and that has lifted the mood on this side of the Atlantic. The rising number of COVID-19 cases around the globe is still an issue, but dealers are ignoring it for now,” he added.

Did someone mention the coronavirus?

The latest coronavirus update from Pantheon Macroeconomics noted that new US cases yesterday jumped to 40,000, from 27,800 on Thursday of last week, which is a 44.0% increase.

“This slightly overstates the true increase, however, because Wisconsin reported a large number of probable cases for the first time. Adjusting for this, cases in the 50 states plus DC rose 41.5%,” calculated Ian Shepherdson, the chief economist at Pantheon.

The US remains on course for 100K new cases per day before mid-July, unless changes in peoples' behaviour in the worst-hit states cause a slowdown in the rate of increase. It's too early to see that in the case data, but restaurant diner numbers and employment at small firms is falling across the South and West,” Shepherdson said.

The Pantheon economist is a bit more sanguine about the situation where the number of cases continues to fall, although he is alarmed at the “scenes of hugely overcrowded beaches on the south coast yesterday will result in an increase in cases in a couple weeks' time, mirroring the post-Memorial Day rise in many US states”.

Of course, hes not the first person to be aghast at the sight of semi-naked Brits revelling in the sunshine.

Just nine Footsie stocks are failing to make progress this morning (and one of those is a non-mover) as investors continue to accentuate the positive.

The FTSE 100 was up 72 points at 6,219, helped by Tesco PLC (LON:TSCO) moving into positive territory (up 0.6%) after an initially negative reaction to today's trading statement.

“COVID-19 cases are still rising in the US but so, too, are financial markets,” was the pithy observation of INGs Chris Turner.

AJ Bell investment director Russ Mould observed that: “Governments and central banks continue to shield equities from the bad news on fresh spikes in coronavirus and evidence of the economic damage wrought by the pandemic.”

Thats his explanation for a strong end to the week for the FTSE 100, which is up more than 1%.

The question is how long fiscal and monetary largesse can keep the rally going.

“The upcoming second-quarter results season could result in a collision with reality as the impact of COVID-19 really hits corporate profits,” he cautioned.

A collision with reality has already taken place at shopping centres owner Intu Properties PLC (LON:INTU), where the shares have halved as investors bale out ahead of a highly probably call to the administrators this evening.

“Intu had clearly been in distress due to the rapidly deteriorating retail market conditions especially under COVID-19; however, this outcome will still make some retail landlords and investors pause. Many would have thought that Intu could have avoided administration since investment markets remain effectively closed, with landlords unable to sell assets – particularly shopping centres.

“Administrators will face considerable challenges given the significant asset management requirements to stabilise these shopping centres. The threat of a fire sale looms large and would cause a negative ripple across the sector,” warned Colm Lauder, the property sector analyst at Irish stockbroker, Goodbody.

Shares in British Land PLC (LON:BLND) and Land Securities PLC (LON:LAND) declined in sympathy, with the former off 1% and the latter down by 0.4%.

Anyone want further evidence of how the North East is ignored by national news? Not seen a single mention of Eldon Square or Metro Centre in coverage of Intus financial woes, despite the fact that the Metro Centre is Europes largest indoor shopping complex

8.30am: Tesco falls as investors assess costs of growth

The Dow Jones closed Thursdays session 300 points to the good after US regulators removed some restrictions as to just how banks can invest their cash, while Asia was buoyant too.

“The intense expectation of more fiscal and monetary stimulus wouldnt let a downside correction develop healthily despite the continuous flow of news getting from bad to worse,” said Ipek Ozkardeskaya, senior analyst at Swissquote Bank.

“Major US stock indices rebounded more than 1% on Thursday, even though the business reopening was halted in Texas due to the rapidly rising new cases. Infections jumped in Arizona and California and Apple closed 14 shops in Florida.

“Meanwhile, the US jobless claims rose 1.48mln last week, more than the analyst forecasts hinting that the post-COVID recovery in the jobs market isnt as strong as expectations, and more damage is to come with the renewed containment measures in several places.”

In London, Tesco (LON:TSCO) led the fallers after profit-takers shaved 2% off the value of the supermarket group in the wake of the latest trading statement.

While underlying sales growth was strong, the markets focus appeared to be on the uptick in costs to support the increased demand.

On the up during what has been a fairly turbulent year was British Airways owner IAG (LON:IAG), which opened 3% higher.

This was as much a technical bounce after recent falls than buying activity based on fundamentals, analysts said.

On the FTSE 250, rise of just over a third in its daily revenues boosted shares in online gambling specialist 888 Holdings (LON:888) 11%.

Supermarket Income REIT (LON:SUPR) confirmed it is in discussions to acquire a portfolio of assets via a sale and leaseback transaction with a major grocery operator. The trust earlier reported that it received 100% of rents due in the June 2020 quarter renewal.

Bahamas Petroleum Company PLC (LON:BPC) told investors that it has completed the administrative formalities to set up its Bahamian mutual fund and is ready to start the drilling of the Perseverance #1 well between December and next February.

Iofina PLC (LON:IOF) said its IO#8 iodine extraction plant in the US is back on stream after the restart of supplies of source material brine, which comes from onshore oilfields.

Live Company Group PLC (LON:LVCG) said it has raised £400,000 in a share placing to help fund its planned build programme for 2020 and to “take advantage of post lockdown operating conditions”.

Zanaga Iron Ore Company Ltd (LON:ZIOC) told investors it has entered a subscription agreement with Shard Merchant Capital, under which some 21mln shares will be issued in up to three tranches.

Amur Minerals Corporation (LON:AMC) said it is expecting “some high-value outputs” in 2020 after the mineral explorer reported narrowed losses in its 2019 financial year.

Sativa Group PLC (LON:SATI), the medicinal cannabis group, has welcomed the clarity of the regulatory framework concerning the use of cannabidiol (CBD) products in food.

PowerHouse Energy Group PLC (LON:PHE) said a shareholder proxy vote will take place July 14 to decide whether to allow the company to issue the 1,437,440,277 shares to acquire Waste2Tricity Limited, a specialist solutions provider to the energy-from-waste sector. Chairman William Davies has sent a letter to shareholders that includes the background to and reasons for the acquisition, a copy of which will be available on the company's website, www.powerhouseenergy.net.

Shield Therapeutics PLC (LON:STX) has brought co-founder Dr Christian Schweiger back onto the board as a non-executive director, with immediate Read More – Source
[contf]
[contfnew]