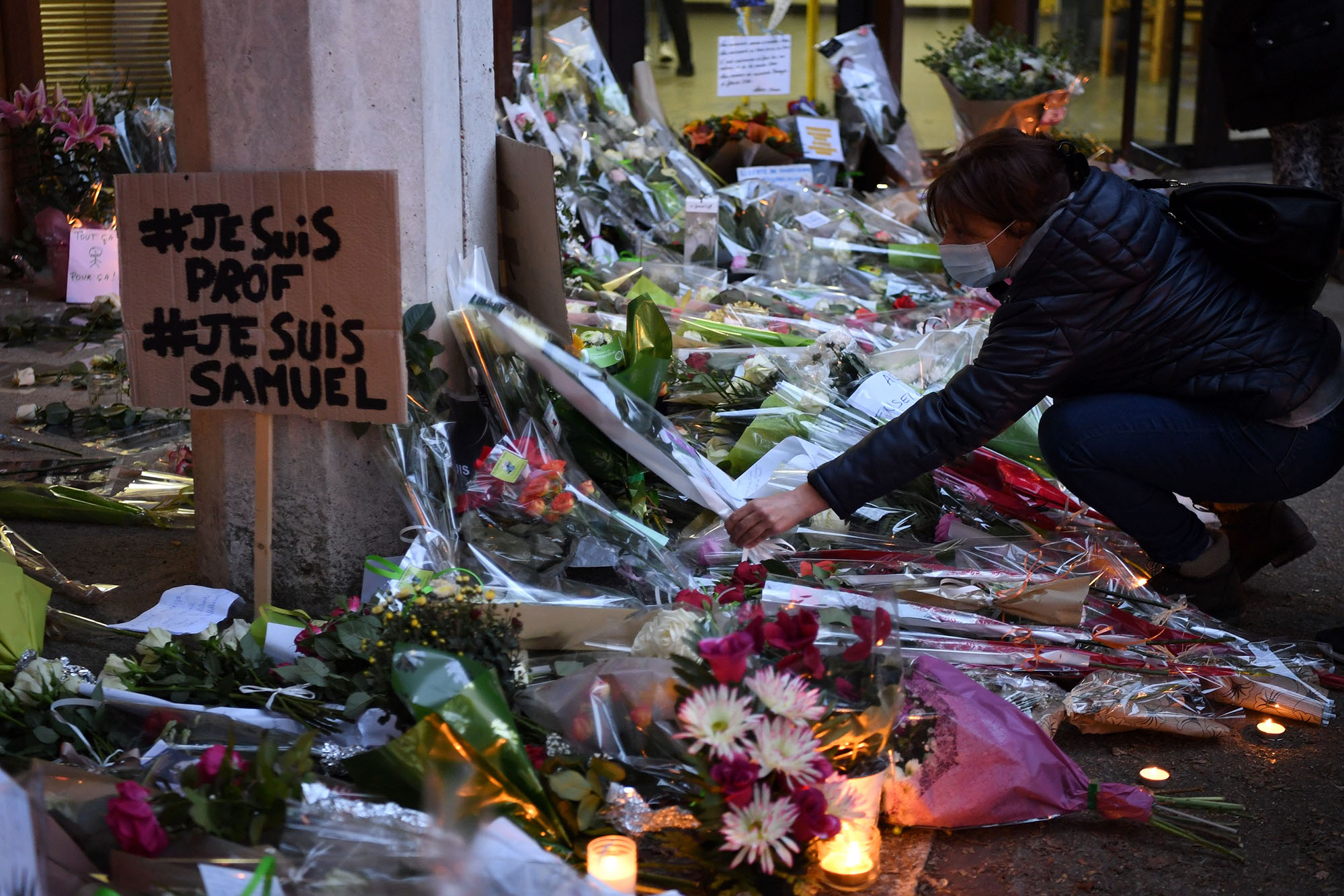 PARIS — The shock caused by the beheading of a teacher in Paris has reignited the conversation in France about social media regulation.

Several ministers called for stricter rules after it emerged that Samuel Paty, the victim, had been threatened on social media for showing caricatures of the Prophet Muhammad in his class before being killed on Friday.

French representatives from Google, Facebook, Instagram, Twitter, TikTok and Snapchat have been summoned to a meeting by the minister in charge of citizenship, Marlène Schiappa, on Tuesday morning. The companies have been asked to come up with “concrete proposals” about “cyber-Islamism,” an official said.

On Monday morning, Interior Minister Gérald Darmanin said he wanted to fight “social networks’ terrorist propaganda.” Authors of 80 posts that expressed support for the attacker are being monitored, the government said.

“Those who participated in the public lynching of this teacher are, in some way, responsible for what happened,” Gabriel Attal, a government spokesperson, said Sunday.

The strong reaction came after it emerged that the father of one of Paty’s students had taken to social media to express his anger at the teacher and called for his dismissal. The teacher, who had shown caricatures of the Prophet Muhammad as part of a class on freedom of speech, had reportedly offered students the option to leave the classroom if they were offended by the images.

The father’s posts were later shared via Facebook groups and WhatsApp messages — drawing attention from radical groups, including the terrorist.

The chain of events shed an unpleasant light on what has been done — and not been done — in the country to tackle a decade-old problem. Earlier this year, the country’s constitutional court struck down a draft law that was meant to limit the spread of hateful content on social media

The lawmaker behind the draft law, Laetitia Avia, from Emmanuel Macron’s La République en Marche party, said she’s still working on tackling hate speech and is considering a new bill, among other options. Other MPs from the opposition, including conservative leader Christian Jacob, said they would also make proposals to regulate social media content and anonymity on the internet as a way to fight terrorism.

But while groups involved in the fight against hate speech online have criticized the role of social media, they also highlighted gaps in existing rules, saying the government hasn’t put its money where its mouth is.

Paty had filed a complaint to the police after he was made aware of threats coming from social media. He also alerted his bosses. An NGO reported the terrorist’s Twitter account to authorities, French media Le Point reported.

NGOs have “dedicated channels with tech platforms as trusted flaggers,” Dominique Sopo, head of the NGO SOS Racisme said. But the fight against hate speech “hasn’t been the government’s priority,” he argued. “As the police resources were not sufficient … not enough attention was paid to harassment in everyday life,” he added.

“We know that moderation is a question of means,” he said, calling for more transparency from platforms, including on staffing.

French law requires online platforms to remove illegal content once it’s been flagged, as part of the EU’s 2000 e-commerce directive. Since 2009, child sexual abuse material, racist and anti-Semitic comments, hate speech and terrorist propaganda can be flagged via a platform called Pharos.

It’s via Pharos that the terrorist’s account was reported by an NGO, and it was also used to identify people who have expressed support for the terrorist after the attack. In 2019 alone, more than 228,000 reports were filed to the platform, according to the government, which are handled by a team of 28 officers.

In 2018, Schiappa shepherded a law against online bullying in groups. Sanctions include up to three years in prison and €30,000 fines.

The latest legislative efforts to crack down on hate speech have, however, failed. MP Avia’s law, which required platforms such as Facebook and Twitter to remove flagged hate speech within 24 hours, was almost completely struck down by the country’s constitutional council. The council argued the text could threaten freedom of speech.

Pressure up on social networks

Avia now wants parts of the aborted legislation to be included in the government’s upcoming bill on “separatism,” meant to fight radical Islam, according to France Info.

“Today, I still don’t know how many content moderators Twitter has and where they are,” she told Read More – Source