France Libre 24 is a website made to look like a French news outlet, complete with French-language articles and an Eiffel Tower logo.

Except those cues are deeply misleading.

The platform, which publishes news stories on French politics and social affairs, is actually run by a group of Polish far-right activists who are linked to the right-wing Konfederacja party and former MEP Janusz Korwin-Mikke, according to research conducted by nonprofit group EU DisinfoLab and POLITICO.

Its content is frequently copy-pasted from traditional sources such as Agence France-Presse or Ouest France, but modified to fit anti-establishment, anti-migrant, anti-Islam and climate-skeptic themes, further research has shown. Words are changed or entire sentences deleted to fit the narrative.

The result is a popular, highly partisan platform — it draws about 150,000 monthly visits — that underscores some of the thorniest challenges in the fight against online misinformation: identifying who is behind divisive content, and taking action when the authors work within the European Union. Thats a problem for the EUs current framework against disinformation, which is not yet fit to tackle intra-EU campaigns.

France Libre 24, which was launched about six months ago, also shows how European far-right movements are increasingly working across borders to advance a shared agenda.

“Its ironic that these nationalist groups who have railed against globalization now find themselves part of a global movement. Its a definite paradox.”

The emergence of platforms like France Libre 24 (FL24) poses fresh challenges for anti-disinformation schemes, many of which were designed to focus on external actors such as Russia, and rely on self-regulation by platforms such as Facebook, Twitter and Google. 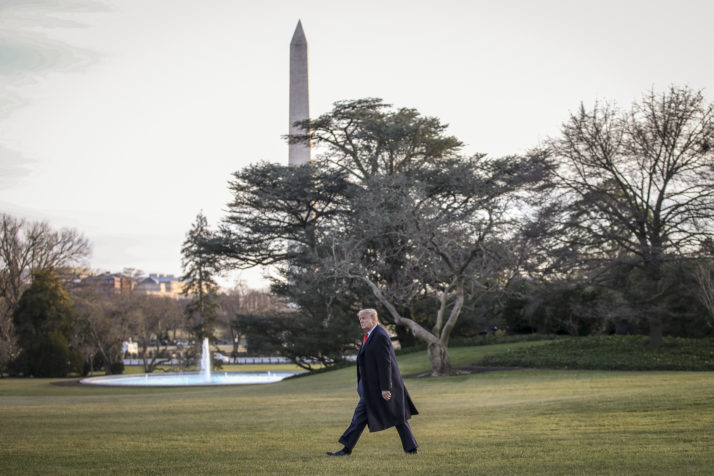 Asked how the EU might deal with examples such as FL24, European Commission Vice President for Values and Transparency Věra Jourová said it plans to address new forms of misinformation — including EU-grown ones — via a future framework called the European Democracy Action Plan.

One of its goals will be to “increase the cost of malign disinformation campaigns. Today, it is simply too cheap,” she told POLITICO in a statement. “We are actually increasingly concerned about disinformation by actors within member states and we observe cases of disinformation driven by non-state actors, related for instance to vaccination or climate change.”

FL24 did not reply to an emailed request for comment. In an article posted on January 12, the site disclosed its Polish backers for the first time, saying it had done so in response to enquiries from POLITICO.

“Our investors being for the most part Polish, our company is duly registered under Polish law at the Register of Commerce and Companies in Warsaw,” the post reads.

While FL24 says it has published more than 5,000 pieces of content in its six-month life span, few are originally reported. Most of the posts are drawn from traditional news sources, then distorted to fit a highly partisan agenda: All French political parties are criticized except for the far-right National Rally. U.S. President Donald Trump is systematically defended. Muslims are described as dangerous and climate change as a “monstrous deception created by left-wing scientists.”

In December, a story posted by FL24 that presented migrants in a negative light was debunked by the AFPs fact-checking team. FL24 did not amend its text after the fact-check.

The website also picked up an AFP report about a spat between French President Emmanuel Macron and Brazilian President Jair Bolsonaro over the fires in Australia. The FL24 story copy-pasted the AFP article word-for-word, but deleted a sentence which described the Brazilian leader as “climate-skeptic.” The AFP did not reply to a request for comment. 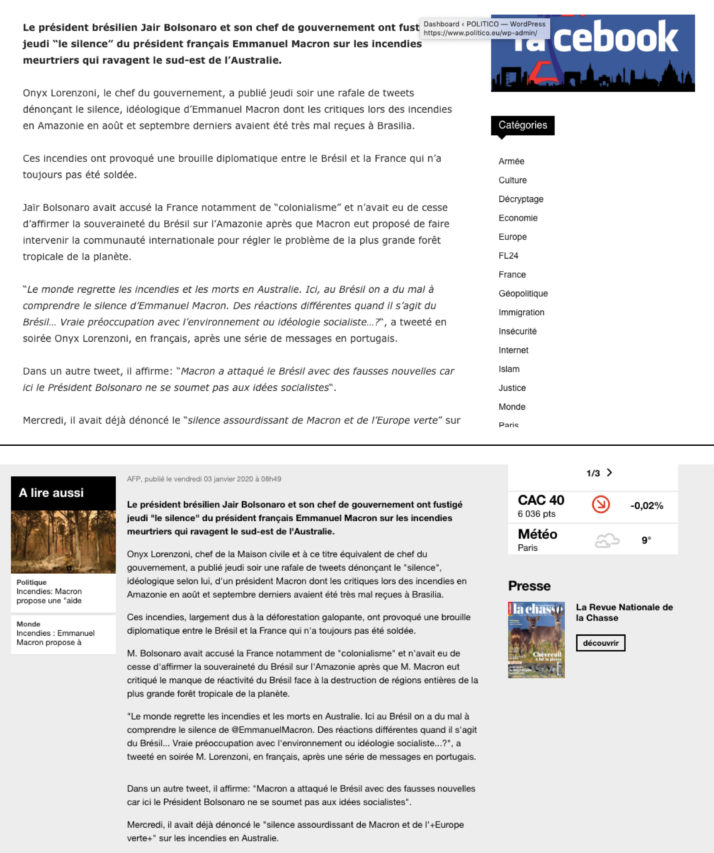 In another example of manipulating others content, a story from French newspaper Libération on transphobic assaults was altered by the self-described “free information portal.”

While the initial article aimed to raise awareness on systemic discrimination against transsexual people, FL24 changed its title to: “A trans beaten up: He lies because he is left-wing,” while still crediting Libération as the source. 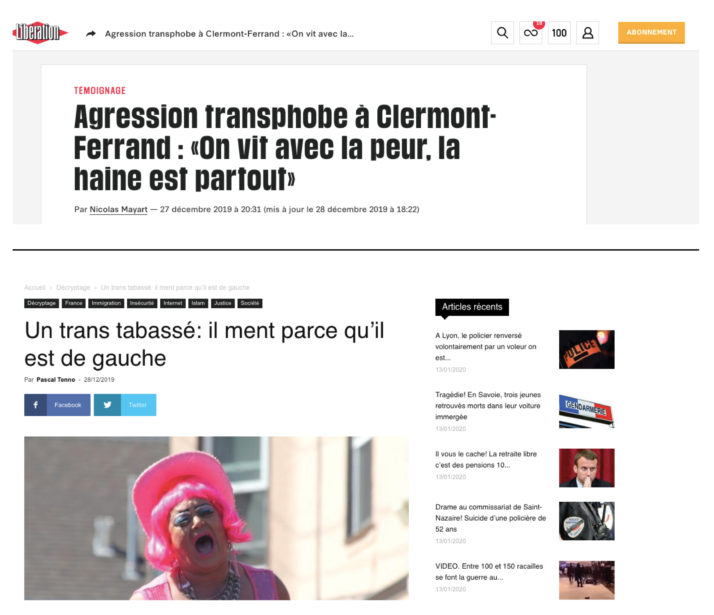 “The trans refuses to explain who assaulted him, that is to say most probably Muslims,” reads the FL24 text. “This case shows how much the debate on homophobia in France is perverted by the Left,” the website wrote.

FL24 — which made no mention of its links to Poland before January 12 — was set up in July 2019 and quickly drew a substantial following, with peak readership of nearly 400,000 monthly visits in November.

Its Facebook page, which is managed from both France and Poland, has more than 20,000 followers. About 70 percent of the websites internet traffic comes from Facebook.

While articles at times carry bylines, the names do not match up to any online profiles.

“If some of us remain anonymous, its simply because we take risks and face islamist terrorism and leftist violence,” FL24 wrote on January 12.

Research by EU DisinfoLab established that the platform is registered in Poland and has the same IP address as wolnosc24.pl — a website run by a publishing house called 5S Media. The publisher also owns a magazine called Najwyższy Czas! which was co-founded by Janusz Korwin-Mikke, an ex-MEP and currently a lawmaker of Konfederacja, a far-right party in the Polish parliament.

The platforms web archives, which were retrieved by EU DisinfoLab, show it previously listed 6S Media, a company registered in Poland which runs FL24. 6S Media has the same address and a similar set of shareholders as 5S Media.

Several of the main investors behind FL24 are active in Polands far-right scene, and show a keen interest in French affairs.

Krzysztof Szczawiński, FL24s majority shareholder, has hinted on his Facebook page that hes involved in Konfederacjas electoral activities. A self-described “private investor in education, media and video games,” he also has shown interest in French politics. 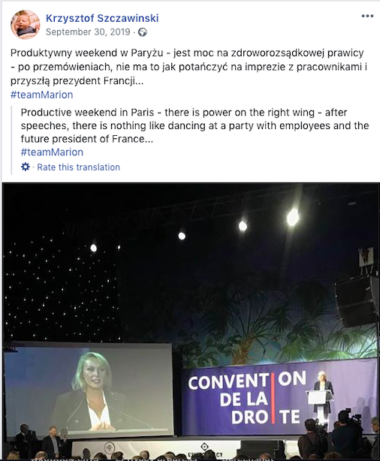 Last summer, Szczawiński attended the Convention de la Droite, where prominent French far-right figure Marion Maréchal Le Pen gave a speech. In one Facebook post, he called her “the next president of France” while in another he poses with a FL24 T-shirt.

Adam Gwiazda, a second investor who currently lives and works in France, is also linked to far-right movements.