Face-scanning technology is inspiring a wave of privacy fears as the software creeps into every corner of life in the United States and Europe — at border crossings, on police vehicles and in stadiums, airports and high schools. But efforts to check its spread are hitting a wall of resistance on both sides of the Atlantic.

One big reason: Western governments are embracing this technology for their own use, valuing security and data collection over privacy and civil liberties. And in Washington, U.S. President Donald Trumps impeachment and the death of a key civil rights and privacy champion have snarled expectations for a congressional drive to enact restrictions.

The result is an impasse that has left tech companies largely in control of where and how to deploy facial recognition, which they have sold to police agencies and embedded in consumers apps and smartphones. The stalemate has persisted even in Europes most privacy-minded countries, such as Germany, and despite a bipartisan U.S. alliance of civil-libertarian Democrats and Republicans.

Advocates for tighter regulations point to China as an example of the technologys nightmare potential, amid reports authorities are using it to indiscriminately track citizens in public, identify pro-democracy protesters in Hong Kong and oppress millions of Muslim Uighurs in Xinjiang. Current implementations of the software also perpetuate racial bias by misidentifying people of color far more frequently than white people, according to a U.S. government study released just before Congress left town for Christmas.

“Facial recognition needs to be stopped before a fait accompli is established,” Patrick Breyer, a member of the European Parliament for the Pirate Party Germany, told POLITICO.

“There is growing evidence that the U.S. is increasingly using AI in oppressive and harmful ways that echo Chinas use” — AI Now, research group

“The use of facial recognition technology poses a staggering threat to Americans privacy,” Democratic Senator Ed Markey, who is prepping legislation to crack down on the software, said in June.

But police and security forces across the West are still rapidly testing or rolling out the technology, adopting it as an inexpensive way to keep tabs on large groups of people. Cameras and artificial intelligence that can identify people based on their facial features are also showing up at border crossings, on police vehicles, at the entrances to stadiums and even in some high schools in the U.S. and Europe, where they are used to identify students. Such examples far outnumber the facial recognition bans enacted in San Francisco and some other U.S. cities.

In Washington, a once-promising bipartisan push in the House of Representatives to limit the federal governments use of facial recognition has stalled for unrelated reasons, including the death of former House Oversight Chairman Elijah Cummings and acrimony over impeachment. And in the Senate, more limited proposals to rein in federal agencies use of the technology have been slow to pick up support.

But privacy activists are drawing a broader lesson from governments failure to check the technologys spread, saying it is eroding the differences between the way Western governments and China approach public surveillance.

“There is growing evidence that the U.S. is increasingly using AI in oppressive and harmful ways that echo Chinas use,” AI Now, a research group at New York University, wrote in a report published this month that underscored the spread of “invasive” artificial intelligence technology.

In both the U.S. and Europe, the stuttering progress of efforts to regulate facial recognition stems from a blend of reluctance by security-obsessed governments and setbacks that have stymied lawmakers focus.

The latter obstacles have included the death in October of Cummings, whose panel had seemed poised to craft bipartisan legislation restricting face-scanning by federal agencies. Several top Democrats and Republicans on the committee have also been embroiled in the monthslong dispute over Trumps impeachment and upcoming Senate trial.

Democratic and Republican lawmakers alike acknowledged in interviews with POLITICO that the effort has stalled.

“Unfortunately impeachment has sucked all the energy out of the room,” Republican Senator Stephen Lynch, who chairs the Oversight National Security Subcommittee, said this month.

“There hasnt been anything thats happened right now. … Elijahs death put that on hold,” said Senator Mark Meadows of North Carolina, the top Republican on the Oversight Government Operations Subcommittee.

In the European Union, meanwhile, calls by top leaders for quick action on regulating artificial intelligence arent guaranteed to result in any binding EU-wide restrictions.

Even the strict limits on gathering of “sensitive data” in the EUs premier privacy rule, the General Data Protection Regulation, contain a broad carve-out for public authorities that can collect sensitive biometric data if they can justify it. That loophole has allowed facial recognition technology to pop up in locations such as a major Berlin train station, where an experimental project by the authorities has scanned tens of thousands of passersby.

“In the U.S., if youre moving around public spaces, there essentially is no right to privacy” — Patrick Breyer, MEP for the Pirate Party

Even so, Breyer said he is confident Europe will ultimately end up with stricter limits on facial recognition than the United States. The lawmaker argues that the EUs Charter of Fundamental Rights, which grants every European citizen “the right to the protection of personal data concerning him or her,” will protect Europeans from indiscriminate use of facial recognition, while the U.S. Constitution says nothing to that effect, and will not.

“In the U.S., if youre moving around public spaces, there essentially is no right to privacy,” said Breyer, who was trained as a lawyer.

“Here, its the other way around: There is a basic right to data protection and informational self-determination, which means that every piece of data thats collected and processed about us means an intrusion into our basic rights, and [law enforcement agencies] can only do that on a legal basis, and after being granted permission.”

Tech industry leaders are meanwhile seizing on the opportunity to shape any global rules that may emerge. In December 2018, Microsoft President Brad Smith unveiled principles for facial recognition regulations in a rare call to action from a leading industry figure. Amazon Web Services public policy chief, Michael Punke, urged lawmakers to enact legislation that would both “protect civil rights while also allowing for continued innovation and practical application of the technology.”

For now, though, face-scanning tools are rapidly becoming commonplace, embraced by the public and private sector alike.

At the same time, companies like Facebook, Apple and Google have built facial recognition into their most popular devices, for instance as a means of unlocking phones or automatically tagging friends in photos. Amazon has emerged as a top supplier of easy-to-use facial recognition systems, whose customers have included police departments and U.S. government agencies.

Among public authorities, the appetite for facial recognition systems seems to know no bounds. Across the United States, federal, state and local agencies have been conducting so-called experiments for years, with the Transportation Security Administration and U.S. Customs and Border Protection both use facial recognition at select points of entry. On the state and local levels, police departments in Florida, Colorado and Oregon have begun to adopt the technology, with others exploring its use. 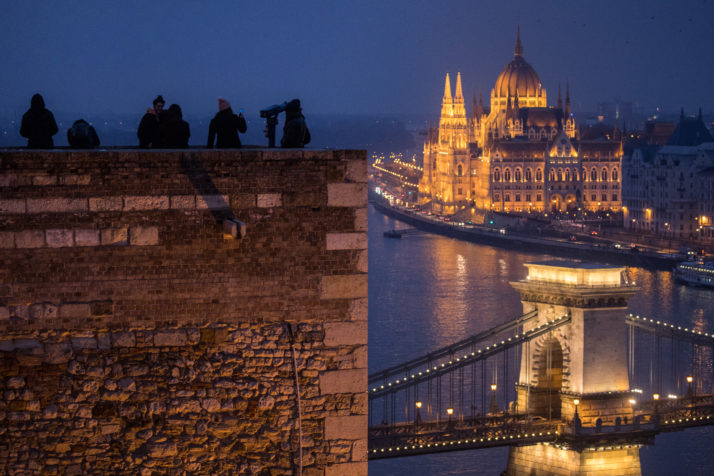 35,000 cameras are being installed in Budapest | Chris McGrath/Getty Images

The situation is no different in Europe. In the U.K., two police forces have been testing facial recognition technology to identify passersby in real time with street cameras. The French government has rolled out a facial-recognition-enabled ID card over protests from digital rights groups. Meanwhile, Hungarys interior ministry is installing 35,000 cameras across its capital, Budapest, and the rest of the country to capture both facial images and license plates.

Facial recognition is already up and running at some European airports from Lisbon to Prague, where passengers from the EU and Switzerland can skip long lines by opting for an automated border control system scanning their faces.

“Thats worrying,” said Matthias Monroy, a civil liberties activist who works for the leftist Die Linke party in the German parliament. Paired with the power of artificial intelligence and high-powered computing, such technology may soon “make it impossible to move around anonymously in a public space,” he added.

In the U.S., the debate around facial recognition has focused mainly on governments use of the technology. After the American Civil Liberties Union issued a report on Amazons sale of its Rekognition software to police departments, San Francisco became the first city in the world to ban local agencies from using the technology, in a blueprint that activists hope will be replicated elsewhere.

That cause has also found a following in Washington, where a coalition of congressional Democrats and libertarian-leaning Republicans, worried about the implications of unchecked government surveillance, wants to restrict the use of facial recognition by federal agencies like the FBI, TSA and Immigration and Customs Enforcement. Leaders of the House Oversight Committee have explored a bill that would block funding for any new use or expanded use of the technology by the federal government, the panels top Republican told POLITICO in August.