When global leaders gathered virtually last month at the behest of the World Health Organization to commit to distributing a future coronavirus vaccine in an internationally equitable way, the United States didnt join in.

On Monday, the European Union is hosting a gathering for countries to pledge funding for research into vaccines and treatments for COVID-19, the disease caused by the novel coronavirus. But once again the U.S. government isnt expected to participate.

The Trump administrations apparent lack of interest in cooperation has alarmed global health officials and diplomats as they seek to end a pandemic that has disabled economies and killed more than 240,000 people worldwide. The concerns are only deepening as U.S. President Donald Trump and his aides squabble with China and the WHO over the origins of the virus.

The fear is that Trump will be content with allowing the race to develop and distribute the vaccine to devolve into a global contest — and that poorer countries will be left behind in the rush to procure doses. In essence: that the presidents “America First” view of world affairs as an atavistic scramble for power will lead to unnecessary suffering and death.

“The worst situation would be, if when these tools are available, they go to the highest bidder — that would be terrible for the world,” said Melinda Gates, who, along with her tech entrepreneur husband, Bill, leads a powerful foundation that has devoted billions to health research. “COVID-19 anywhere is COVID-19 everywhere. And thats why its got to take global cooperation.”

“Whatever the maximum is, whatever you can humanly do, were going to have” — Donald Trump

The ongoing global scramble for masks, gloves and other personal protective gear offers a harrowing and potentially instructive example. Now imagine, officials and experts say, a similar competition to obtain vaccine doses: It could drag out the health crisis by letting the virus spread for longer than it otherwise might, devastating the very countries least equipped to fight it.

And there are other risks. For one thing, another country, such as China, might develop a vaccine first and find ways to limit access to Americans.

“You would think that, based on the past, that the U.S. would be a galvanizing, lead element in pushing for transparency and early planning” on the vaccine front, said Stephen Morrison, who runs a global health program at the Center for Strategic and International Studies. “I dont think thats true in this administration.”

A European ambassador said he and his colleagues remain “hopeful” that the United States will take the lead on ensuring fair global vaccine access. “But we are a bit skeptical at the moment,” he said, “because we dont see the forthcoming attitude that weve seen in the past.”

One disputed report in particular is driving much of the angst: that the Trump administration tried to acquire exclusive rights to the coronavirus vaccine business of CureVac, a Germany-based company. Trump aides and CureVac officials adamantly denied the mid-March report, but German officials confirmed and condemned it.

The U.S. is planning an intense push to create a vaccine and have enough doses available to cover most Americans by the end of this year, the president confirmed this week. The project is called “Operation Warp Speed,” according to Bloomberg News and other media reports, which described it as an effort to compress the usual process for developing a vaccine into a shorter timeline.

Asked about the project Thursday, Trump said he was in charge of it and that he was not overpromising. “Whatever the maximum is, whatever you can humanly do, were going to have,” the president said.

Health officials and analysts caution that its too early to go into full-fledged panic about a looming global vaccine fistfight.

An acceptable vaccine could be at least a year to 18 months away; companies across the world, especially in the United States, Europe and China, are in the hunt to find a vaccine, and some trials are already underway. Some diplomats carefully pointed out that by the time vaccines are ready for sale and distribution, Trump may no longer be president, and his “America First” ideas may be shunted aside.

“You have the election in six months time — you never know,” an Asian diplomat told POLITICO.

But further blurring the picture is the fact that the global health infrastructure isnt entirely under the thumb of any one government. Its a complex amalgam of government bodies, private companies, NGOs, foundations and multilateral partnerships that at times do overlapping work. 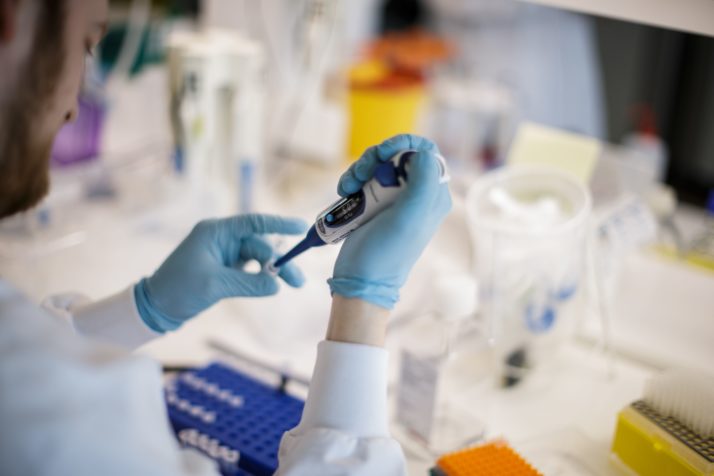 Theres no binding treaty or other mechanism that governs how a vaccine will be produced and distributed worldwide. And while the WHO has for decades offered a forum for coordination, discussion and standard-setting, its authority is still limited, including when it comes to private companies with profit motives.

Trump has also dealt a blow to the WHO by recently pausing Americas substantial funding for it. He alleges that the U.N. body effectively helped China cover up the extent of the crisis when the virus first emerged in the Chinese city of Wuhan last year. The WHOs supporters say Trump is trying to deflect attention from his own downplaying of the crisis early on.

But the growing U.S. hostility to the WHO is hardly the only obstacle to international coordination on a vaccine rollout: China likewise did not express support last month for a new global partnership to coordinate research and development for vaccines, tests and coronavirus cures. The absence of the two pharma powerhouses from the April 24 gathering, led in part by the WHO, disappointed European leaders, who are pushing for a cooperative approach. French President Emmanuel Macron said he hoped they could “reconcile this initiative with China and the U.S.”

Officials involved in the April 24 gathering as well as Mondays planned EU-led conference stress that there is an American presence in such events even if the U.S. government itself doesnt formally take part. A number of foundations, companies and others playing a role are U.S.-based.

“There is a strong American footprint in the whole construction,” European Commission President Ursula von der Leyen said about Mondays gathering in an interview with France 24 . “We have a lot of American scientists and philanthropists that are working with us in this global framework weve created. The government of the United States is informed. And I hope they consider to participate.”

Asked about the Trump administrations participation and plans for future international coordination on vaccines, a spokesperson for the U.S. State Department offered a vague comment that attacked the WHO.

“Americas world-leading scientists are working hard on a COVID-19 vaccine,” the spokesperson said. “We welcome serious efforts to assist in that endeavor and look forward to learning more about the World Health Organizations proposal. We remain deeply concerned about the WHOs effectiveness, given that its gross failures helped fuel the current pandemic.”

Spokespersons for the White House and the Department of Health and Human Services did not offer comment.

The United States has historically been a leader in global vaccine initiatives, often footing much of the bill. Its interest dates back decades and covers successful efforts to eradicate or dramatically constrain diseases such as smallpox, polio and measles. The focus has often been on vaccinating children so that they never fall ill and over time contribute to whats known as “herd immunity” in their broader communities.

Dozens of countries, including the U.S. and some in Europe, have imposed travel restrictions as well as limits on the exports of masks and other critical medical equipment.

But infectious disease crises that have arisen in more recent years have exposed weaknesses in a system that relies so much on goodwill and benevolence, rather than any particular set of international rules.

For example, the rise in 2009 of an H1N1 novel influenza led wealthier nations to put in large advanced orders for a vaccine and buy most of what was eventually manufactured, angering developing countries who lacked similar funds. The WHO and others managed to secure pledges of donations for the poorer countries, but even those were limited, according to research posted by the National Center for Biotechnology Information.

The COVID-19 pandemic is in many ways more severe, with infections in more than 180 countries. Aside from the vaccine issue, it has exposed the frailty of global cooperation in other ways. Efforts to work together at the G7, G20 and United Nations level have had limited impact amid finger-pointing between Washington and Beijing.

Its not just the U.S. that has put the needs of its own citizens first. Dozens of countries, including the U.S. and some in Europe, have imposed travel restrictions as well as limits on the exports of masks and other critical medical equipment. 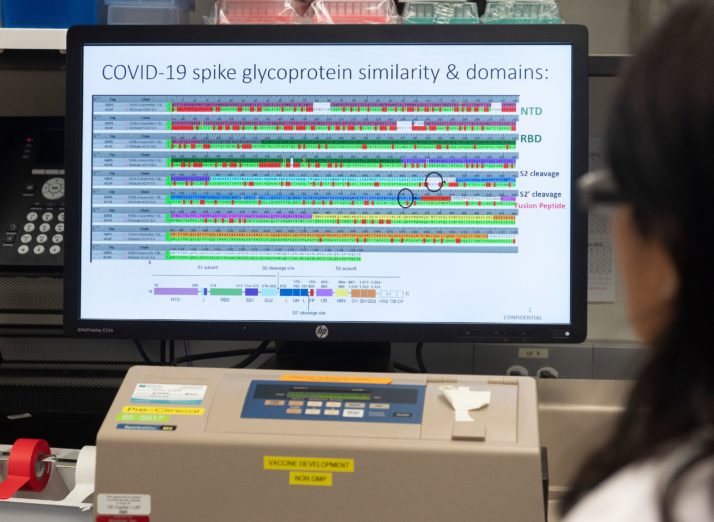 The protein structure of a potential COVID-19 vaccine at Novavax labs in Rockville, Maryland | Andrew Caballero-Reynolds/AFP via Getty Images

Global health leaders are trying to avoid a repeat of such nationalist tactics when it comes to vaccines and other types of medicines that could combat COVID-19. They warn in particular that leaving the virus to fester in one country could, simply due to migration patterns, mean it will re-emerge elsewhere. And they say that a globally coordinated approach to distributing a vaccine — prioritizing at-risk populations, for instance — would yield better results.

Melinda Gates told POLITICO in an interview that medical workers should be at the head of the line for vaccinations because of their regular exposure to the virus. She also praised European leaders for being out in front in coordinating on vaccines and therapeutics.

“Its the European leaders, quite honestly, who understand that we need global cooperation,” she said.

National security officials and public health experts also are increasingly concerned about the prospect of China developing a vaccine first, and how Americas unwillingness to take charge of global vaccine coordination might help both Chinas economy and its propaganda efforts.

“China does have a head start” in the global effort to come up with a vaccine, said one national security official who spoke on condition of anonymity to discuss U.S. government concerns. “But they also have a pattern of theft and trying to steal everyone elses research. So you would think theyd be very benevolent [with the vaccine] so as not to be seen as a pariah.”

As their governments have been sparring, American and Chinese scientists have actually been cooperating on COVID-19 research.

A spike in hacking attempts on U.S. hospitals and labs, which intelligence and national security officials have attRead More – Source
[contf]
[contfnew]