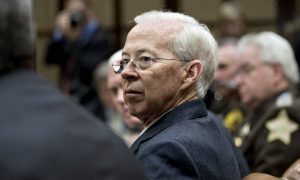 WASHINGTON—The FBIs top lawyer, Dana Boente, who has spent nearly 40 years with the Justice Department, is leaving the bureau.

Boente has most recently served as the FBIs general counsel but has held a variety of roles in his 38-year Justice Department career, including acting attorney general in the early days of the Trump administration, a United States attorney in Virginia and the acting head of the departments national security division.

The FBI said that Boente had given notice on Friday that he intended to retire effective June 30, the bureau said.

“Throughout his long and distinguished career as a public servant, Dana has demonstrated a selfless determination to ensure that justice is always served on behalf of our citizens,” FBI Director Christopher Wray said in a statement announcing Boentes departure. “We should all be grateful for his dedication to the Department of Justice, the FBI, and the American people.”

Boente became acting attorney general in early 2017 after Sally Yates, a holdover from the Obama administration, was fired after refusing to defend the presidents travel ban, and remained in that role until Jeff Sessions was installed.

As a top Justice Department official, he approved one of three applications to renew secret surveillRead More From Source
[contf]
[contfnew]