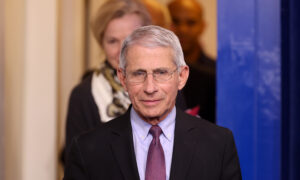 Dr. Anthony Fauci, director of the National Institute of Allergy and Infectious Diseases, said Friday that it is time to reopen the economy, but warned that states should do so cautiously, with precautions to prevent a resurge.

Speaking in an interview with CNBC, Fauci said maintaining stay-at-home orders for too long could cause “irreparable damage.” He dismissed claims that public health experts in the administration were urging prolonged lockdowns, which were imposed early in the outbreak to curb the spread of COVID-19, the respiratory illness caused by the Chinese Communist Party (CCP) virus, commonly known as the novel coronavirus.

“Now is the time, depending upon where you are and what your situation is, to begin to seriously look at reopening the economy, reopening the country to try to get back to some degree of normal,” Fauci told CNBCs Meg Tirrell.

His comments echo what he said on Thursday, during an online coaching and learning session of the COVID-19 Local Response Initiative, a project to help city leaders cope with the pandemic and its resulting public health and economic crises.

Currently, data shows that more than 90,000 people in the United States have died from the virus so far.

The number of Americans applying for unemployment benefits in the two months since the virus took hold in America has swelled to nearly 39 million, a job-market collapse unprecedented in its speed.

Fauci told mayors that cities “absolutely need to somehow get back to a degree of normality,” according to a post by Bloomberg Cities.

He added that city leaders needed to adapt their response to the specifics of the outbreak in their regions, but stressed that a testing and contact tracing program was key across the board.

“It is almost unreasonable to think that thats not going to happen,” Fauci said of what he called “blips of infection” of COVID-19.

“You need to not be discouraged by it, but importantly, you need to have a testing program in place: tests available, the manpower to perform testing, and to do the kinds of identification, isolation, and contact tracing that would prevent that blip from becoming a resurgence. Because the danger of that happening is real,” he said.