A court in Moscow has convicted Nikita Belykh, a former governor of Russia’s Kirov Region, of large-scale bribery over a 2016 incident, in which he was detained while accepting €400,000 in cash from businessmen.

The ruling on Belykh’s conviction was announced in Presnensky District Court on Thursday afternoon. The sentence is expected to be pronounced later in the day, with prosecutors demanding 10 years in prison and a 100 million ruble fine ($1.75 million) for the ex-official.

The case against Belykh began in June 2016, after the then-governor was detained in the process of receiving a €400,000 (over $440,000) cash bribe in a Moscow restaurant. Investigators suspected the bribe was intended as payment for including two local companies – a ski factory and a forest-management firm – in a federal investment program as priority projects. During the investigation, more instances of bribery were uncovered, bringing the total amount of received funds to €600,000 ($745,000).

Shortly after the incident, Belykh was relieved of his duties as a governor due to lack of trust.

During the investigation, the former official insisted that the money he received was not a bribe, but a contribution towards a charity project. In his final plea on January 26, he again said he was not guilty of the charges and added that some unnamed forces were interested in creating and maintaining “the myth that all civil servants are corrupt.” 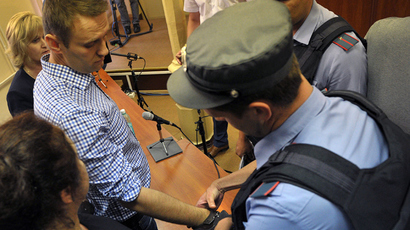 Belykh had previously been involved in at least one other corruption scandal – the so-called ‘Kirovles case,’ in which the now-famous anti-corruption activist, Aleksey Navalny, received a five-year suspended sentence after a court found him and two local businessmen guilty of embezzling funds from a state-run timber company.

Navalny worked as an aide to Governor Belykh at the time of the crime, and the timber firm would later become part of the forest-management company mentioned in Belykh’s bribery charges.