“Strategic autonomy” is the EU’s latest catchphrase, its label for the bloc’s push to increase self-..

“Strategic autonomy” is the EU’s latest catchphrase, its label for the bloc’s push to increase self-sufficiency and boost its own industry in the wake of the coronavirus pandemic.

After the “America first” motto, and Beijing’s “Made in China 2025” strategy, it’s the old continent’s turn to turn its gaze inward.

But before they can implement it, leaders across the EU have to agree on what it means exactly.

“The strategic independence of Europe is our new common project for this century,” European Council President Charles Michel said last month. “European strategic autonomy is goal No. 1 for our generation.” In response to concerns that this drive would undercut the bloc’s free-trade orthodoxy, Michel said: “Autonomy is not protectionism; it is the opposite.”

The slogan has caused a stir among EU heads of states and government, who after heated discussions in early October conceded that “strategic autonomy” is a “key objective” of the bloc, while “maintaining an open economy.”

What strategic autonomy means in practice remains hazy at best — and its ambiguity allows governments across the bloc to project their hopes and fears into the term.

For the European Commission, strategic autonomy encompasses a host of initiatives, including more assertive trade defense instruments like a carbon border levy for emissions-intensive import and a mechanism to police recipients of foreign state subsidies. Another component is a push to increase independence of EU industry from single-country supplies of everything from active ingredients for drugs to raw materials for batteries.

“We are currently working on strengthening the economic resilience and we are looking at different options: on-shoring, near-shoring, stockpiling, diversifying, shortening supply chains,” newly-minted EU Trade Commissioner Valdis Dombrovskis said at his confirmation hearing this month. “This is the whole toolkit which we can explore.” He confirmed that Brussels will present its new approach on trade in 2021.

European Commission President Ursula von der Leyen has also promised to revamp the bloc’s industrial strategy and competition policy, which she said should “keep pace” with global developments. Internal Market Commissioner Thierry Breton is going through a risk-analysis exercise to find weak links in Europe’s supply chains and address them by increasing production on EU soil as well as diversifying suppliers.

But this inward-looking push is rather awkward in the European Union, the world’s most integrated trade bloc and a long-time champion of free trade and multilateralism. EU exports accounted for 15.4 percent of the bloc’s economic output in 2019 — compared to 18 percent in China, and 12 percent in the U.S., according to World Bank data.

For now, much of the debate on strategic autonomy has been on semantics, marking clear political divides between countries that see this as a threat to Europe’s openness, and its proponents who see a chance to advance European industry and help foster “champions” able to compete on a global scale.

“There is a very strong tendency toward ever-growing protectionism,” said Tytti Tuppurainen, Finland’s minister for European Affairs. “It’s the Zeitgeist that has been there for a longer time, but now there are also forces that seize the moment.”

French President Emmanuel Macron has been using the catchphrase for years, applying it to everything from France’s defense sector to European industry, and more recently pharmaceuticals.

Germany and France on Tuesday discussed with the Commission “measures to strengthen the development of future technologies in Europe and reduce our dependence,” according to a statement from the French government.

Some see this as a grand French pipe dream: “Strategic autonomy has been tried in the past. Napoleon had a serious stab at this. It didn’t actually end so well for him,” scoffed one EU diplomat.

But the COVID-19 crisis set off a scramble to secure supplies of masks and other medical equipment, as well as drugs and their ingredients. The crisis also brought Berlin closer to France’s way of thinking on the matter. And when the two European powerhouses agree on something, they generally set the direction for the rest of the EU.

The EU’s competition rulebook “must be rapidly modernized,” German Chancellor Angela Merkel told reporters at a meeting of EU leaders in early October, so that “many global players can also emerge from the EU.” This is particularly important in the digital sector where the EU must become “sovereign,” she said.

As EU leaders debated the matter, Merkel also spoke on behalf of Macron, who wasn’t present for the discussion on his pet topic. This was “elegant,” Macron said, keen to emphasize his unity of views on the issue with the EU’s largest economy. 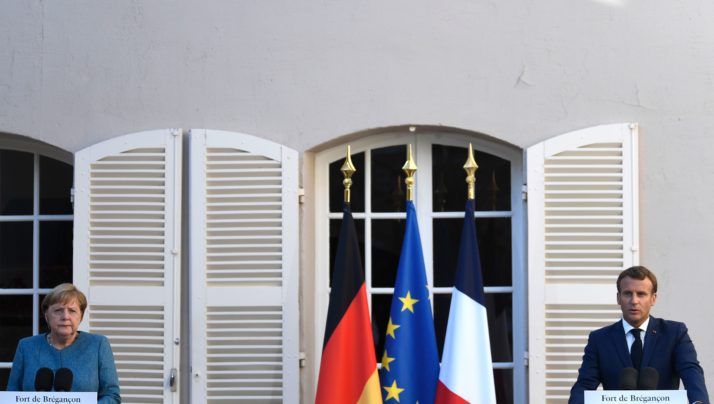 Germany and France on Tuesday discussed with the Commission “measures to strengthen the development of future technologies in Europe and reduce our dependence,” according to a statement from the French government. The two goRead More – Source
[contf]
[contfnew]