Europes new thinking is that it may be more effective to force Silicon Valley companies to change their behavior than to keep fining them, according to top privacy and antitrust officials gathered in Brussels this week.

The shift, which coincides with a changing of the guard at the European Commission, would bring together competition and data protection enforcement powers at the EU level to force large firms to share more of their data and allow new competitors into markets where they are increasingly dominant.

“Many policymakers out there, in the U.S., [Senator] Elizabeth Warren and others, they call for divestiture [breaking up] of these huge companies… [It] will not be the easiest task, especially for a small agency in Bonn, to break up the tech giants in China or in the U.S.,” said Andreas Mundt, who heads Germanys competition authority, the Bundeskartellamt.

“But we can do something about how these companies work in Europe and in Germany,” he added during a conference of key European privacy and competition regulators in Brussels Tuesday evening. “So, structural divestiture, that is the biggest advantage of this decision and that is something that other agencies should also carefully look at.”

Mundt made his argument amid a broader discussion about data and competition attended by the European Commissions secretary-general, Martin Selmayr; Britains Information Commissioner Elizabeth Denham; and the European Data Protection Supervisor Giovanni Buttarelli.

In coming months, Buttarelli said that regulatory authorities should focus on “changing the business model” of companies, while Denham — whose office has this week announced hundreds of millions of euros in fines over data protection breaches — said: “We need to change the business model, and fines are not going to do it.”

What remains to be seen is how such cases would be led. Enforcement of data protection rules is handled at the national level, and the Commissions competition enforcers have yet to make access to data the central argument in a major investigation.

Selmayr pushed back against the idea of a single digital regulator, advocated by the likes of former Obama advisor Jason Furman. But the secretary-general called for much tighter coordination. “We dont need a single regulator, but we need all these regulators to horizontally and vertically behave like one,” he said.

The call for tougher structural remedies comes after a period of intense activity by Europes antitrust czar, Margrethe Vestager, whose office imposed more than €8 billion in fines against Google alone. 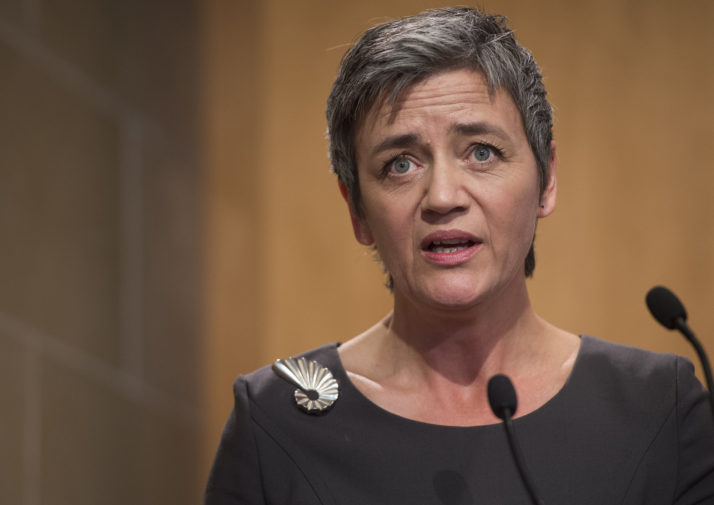 While the fines have a major political impact, their effect on the market in terms of helping smaller competitors remain to be seen. Google and Apple have both gained market share in the wake of their run-ins with the Commission, and all the cases are still snarled up in court proceedings. EU-based alternatives to Google and other services, like search engine Qwant and private messaging app Wire, have struggled to make even the slightest dent in tech giants control on the market.

Whats more, complainants in many tech competition cases say the remedies imposed on the firms are falling short. And so far, EU authorities have shown little appetite for demanding the breakup of a U.S.-based company — a step that might trigger a furious diplomatic or commercial response.

“I believe that if we find an anticompetitive business model, we have to change the business model, so we would have to impose structural remedies that make sure that this kind of behavior is not the future,” he said, referring to “internal divestiture” — or imposing Chinese walls between subsidiaries — as a viable option.

Mundt in February ordered that Facebook stop combining users data in a first major strike at the heart of the companys business model. Users will now need to give their consent to allow the social network toRead More – Source