Americas closest European allies are revolting against Brussels attempt to build a parallel World Trade Organization court with Russia, China and Brazil but without the U.S.

A group of EU countries fears the plan of outgoing European Commissioner for Trade Cecilia Malmström could further drive a wedge between Europe and America, according to a dozen EU diplomats, ministers and other national government officials.

Malmström has made no secret of her view that Donald Trump is wrecking the global trade system and needs to be stopped. To circumvent the U.S. presidents blockage of the Appellate Body, the WTO arbiter of last resort, Malmström said last week at a meeting of EU trade ministers that the EU should build “an identical system in order to give some clarity and reassurance to our companies. Ideally we would like to have this as a plurilateral agreement with at least a critical mass of countries.”

But critics fear that parallel court could outlive Trumps presidency, undermining attempts to reform the WTO and cementing a new system in which the EU works closer with Russia and China than with the United States.

Lithuania, a close U.S. ally, has been the most outspoken critic. “If we start real action and drafting plurilateral legal instruments for a WTO dispute settlement with Russia and China but without the U.S., that would raise serious doubts,” Albinas Zananavičius, Lithuanias vice minister of foreign affairs, said in an interview with POLITICO.

“We are ready to look into proposals for an alternative, as long as it is not undermining the existing WTO system and our partnership with the United States” — Latvian government spokesperson

“We need to know what precisely we want to achieve and what will be the long-term implications for the WTO as a whole. There are several member states which are very worried about that development.”

Indeed, at least five other EU countries asked the EUs trade chief to tread carefully at last weeks summit of EU trade ministers, telling Malmström that the EUs priority should be to strengthen and reform the WTO together with Washington.

Some also pointed at attempts by Russia to leverage the talks to get the EU to drop a dispute over Russian sanctions targeting EU meat imports.

Officials from Latvia, the Netherlands, Luxembourg, Denmark and Germany said they preferred alternatives that included the U.S, although a majority of EU countries support the Commissions initiative. 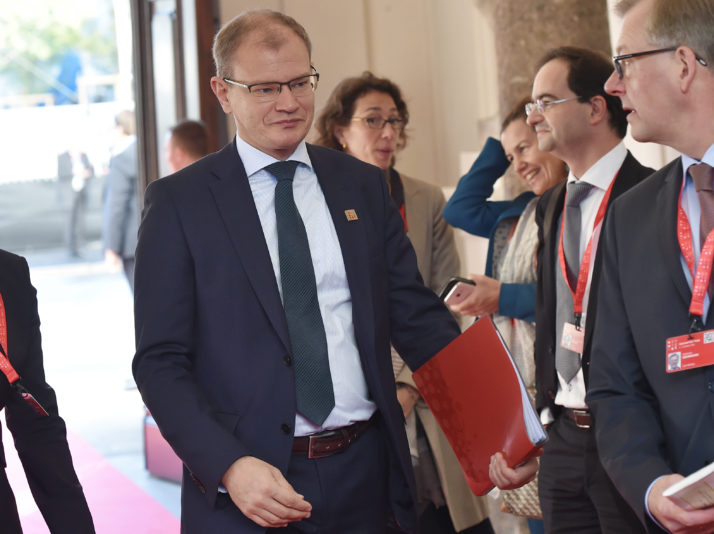 A diplomat from one EU country worried that the Commissions plans risked “pushing the Americans over the final edge. They are blocking the WTO but they havent left the building yet.”

Officials in Berlin told POLITICO that they were open to any proposals made by the Commission for an “interim” solution, but said their preferred way of dealing with the situation would be an existing WTO mechanism to tackle disputes bilaterally, rather than a new “plurilateral” court.

A spokesperson for the Latvian government struck a similar note, saying, “We are ready to look into proposals for an alternative, as long as it is not undermining the existing WTO system and our partnership with the United States. For us, the primary goal is to make the system that we have work again.”

Such concerns led to a clash at the summit last Thursday, four officials said. Following the publication of a POLITICO article revealing that the Commission had already started talks on the plan with other countries such as China, the Council Presidency had to change the summits written conclusions, officials said.

“The Presidency had conclusions which were welcoming of that mechanism, but they were changed after the discussion,” one EU official said.

Asked about those changes, a spokesperson for the trade minister of Finland, which currently holds the Presidency, said, “The initial draft for the Council Conclusions undergoes always some changes based on the eventual discussion. The final Conclusions reflect well the discussion in the Council.”

Lithuanias Zananavičius, who knows the WTO well from his previous job as his countrys top man in Geneva, said the Commissions plan also raised legal concerns. “It will be a problem if the Commission tries to negotiate a legally binding instrument — which has financial implications — with third countries, without a mandate from EU countries.”

A spokesperson for Malmström refuted that criticism, saying its negotiations were technically not new “international agreements setting up a new court and requiring a mandate from the Council,” because they were constructed on the basis of existing WTO provisions.

The Commission spokesperson said Brussels negotiations were “not policy statements whereby the EU would align itself with or against any particular WTO members,” namely the U.S.

Other countries contacted by POLITICO stressed that they supported Malmströms overall fight to defend the rules-based multilateral system against attacks from Trump. Their criticism centered on a perception that the Commission was excessively focused oRead More – Source