LUXEMBOURG — The European Union sought to play down Irans warning Monday that it would soon breach uranium stockpile limits set out in its 2015 nuclear deal with world powers.

“Our focus is to keep the agreement in place,” foreign policy chief Federica Mogherini said after a meeting with EU foreign ministers in Luxembourg.

Mogherinis comments came after a spokesman for Irans Atomic Energy Organization declared: “We have quadrupled the rate of enrichment (of uranium) and even increased it more recently, so that in 10 days it will bypass the 300 kg limit.”

European diplomats said an IAEA report showing Iran was no longer complying with the deal — known as the Joint Comprehensive Plan of Action (JCPOA) — would be a red line for the EU. At that point, the bloc would likely follow the United States in abandoning the deal or try to negotiate a new pact with the U.N., diplomats said. 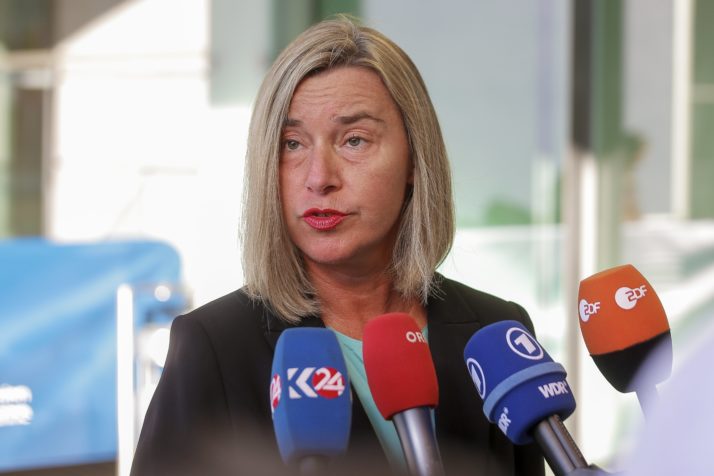 “As long as the IAEA confirms Iran keeps the agreements, I will continue to support the JCPOA,” Dutch Foreign Minister Stef Blok told POLITICO.

“Iran cannot only say to the other participants in the JCPOA that they have to do more and at the same time do less than was agreed,” German Foreign Minister Heiko Maas said.

Since the Trump administration pulled the U.S. out of the Obama-era deal and re-imposed sanctions on Iran, Tehran has repeatedly called on the EU to do more to keep the pact alive.

The U.K., France and Germany — three of the accords co-signatories — have warned Iran not to violate the deal after the U.S. pulled out. But Tehran set a July 7 deadline for the EU to find better terms for the deal, warning it would otherwise take further steps away from the accord.

European diplomats said they saw the Iranian announcement, which they suspect was timed to coincide with the meeting of EU ministers, as a way to put more pressure on the EU to deliver.

“It was kind of expected in sight of the July deadline,” one diplomat said.

Specifically, Iran wants the EU to do more to help the Iranian economy, to make up for at least some of the damage caused by U.S. sanctions.

But the EU has found it difficult to meet Tehrans demands. It has set up a so-called “special purpose vehicle,” called Instex, designed to allow European companies to get around U.S. sanctions and trade with Iran. But the organization is not yet operational and officials acknowledge its effects will be limited even if it gets up and running.

“Our companies are so intertwined with American companies that Instex is really complicated to implement properly,” an EU diplomat said.

The latest friction over the nuclear deal came amid continuing tension between the United States and Iran over attacks on oil tankers in the Gulf of Oman. The United States has blamed the attacks on Tehran, which has denied responsibility.

EU foreign ministers said Monday they need more time to assess U.S. claims, which have been largely backed by the U.K.

“Intelligence by the American and the British secret services suggest that one can be almost sure, we compare that with our own information and we need to treat all that in a very meticulous manner,” Maas said.

“We continue to gather information…. in a situation like this we need to be very meticulous and we are taking the time that we need” he told reporters.