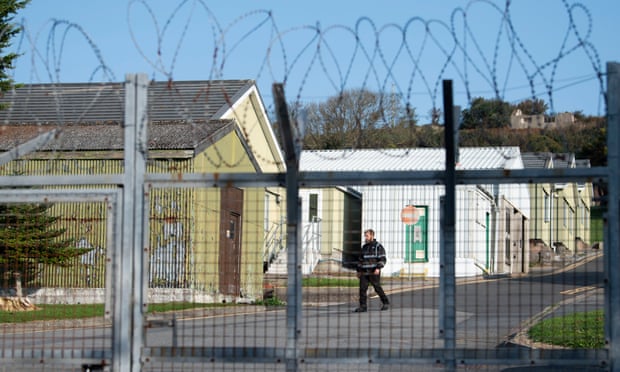 More than 60 community organisations working with migrants held in detention and refugees have urged ministers to consider alternative accommodation to the former army barracks currently being used to house asylum seekers following damning reports on conditions at the sites.

Napier barracks in Kent and Penally barracks in Pembrokeshire, which between them hold more than 600 men, were handed over from the Ministry of Defence to the Home Office in September to be used as accommodation for asylum seekers.

The Home Office has been hit by a raft of reports alleging poor access to healthcare, denial of access to lawyers, overbearing use of confidentiality agreements and concerns over safety and privacy at the sites. There has been at least one confirmed suicide attempt at one of the barracks.

In a letter to the immigration compliance minister, Chris Philp, the organisations, led by the Association of Visitors to Immigration Detainees (Avid), highlight parallels between the barracks and the UK’s system of indefinite immigration detention and calls for community-based alternatives to be sought.

Ali McGinley, the director of Avid, said: “There is no shortage of evidence that the UK’s system of immigration detention does very little other than cause long lasting damage: to the individuals held, but also to their families and communities. We’ve seen this first hand over many years. Choosing to ignore this by replicating the worst injustices of this system in the barracks accommodation is irresponsible, dangerous and puts many more people at risk.”

The letter to Philp outlines how the isolated locations of the barracks have left residents exposed to abuse by far-right activists, who have been able to easily locate the former MoD sites.

The Home Office has said the sites are temporary contingency accommodation for asylum seekers who will eventually be moved to dispersed accommodation such as houses or flats while their claims are considered. It said it intended to use the sites for a year.

Official figures showed that in September, 76% of people awaiting a decision on their asylum claim had been waiting for more than six months, up from 58% in September 2019. The letter states there is growing evidence that managing people’s cases while they remain in the community with access to support is both less expensive and more effective.

Given the significant backlog in processing asylum applications, made worse by the coronavirus pandemic, it is time to consider alternatives, the letter says.

Stephen Hale, the chief executive of Refugee Action, said: “We have serious concerns about the mental and physical health of often traumatised people forced to live behind barbed wire and high fences so close to each other in the middle of a pandemic. People need access to medical and legal support that simply cannot be provided in those conditions.

“Home Office ministers are failing in their duty of care to people in the asylum system. It must urgently work with providers to find more suitable accommodation in a wider range of areas across the country.”

In this article:Immigration and asylum, Refugees