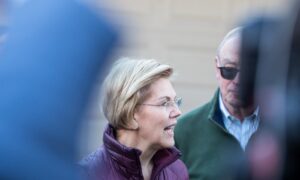 No loved ones were prepared for the death of Donald Herring, Sen. Elizabeth Warren (D-Mass.), his sister, said.

“It just feels like something that didnt have to happen,” Warren, 70, said in a new interview.

Warren said her brother was packed up and ready to leave the rehabilitation facility, which he went to after being hospitalized, but somebody tested positive for COVID-19. Staff then prevented him from leaving and he soon got sick.

“When he said that the coronavirus test had come back positive, its like that note you hear far off—a warning. And I remember thinking I couldnt breathe,” Warren told The Atlantic.

The former Democratic presidential contender said she spoke with her brother over the next 11 days and he seemed to be doing well but one day she called and no one answered. When she called back after a short while, she was told he was rushed to the emergency room.

Herring rallied and was able to speak to Warren over the phone but his condition eventually worsened and he died.

“More than 60,000 families across this country are going through the same thing right now. Its something none of us were prepared for,” Warren said.