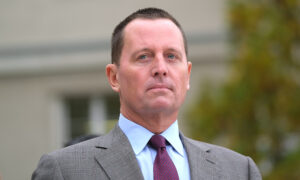 Acting Director of National Intelligence Richard Grenell is in the process of fully declassifying some of the call transcripts involving former National Security Advisor Michael Flynn.

“The [intelligence community] doesnt have all the transcripts/summaries….it wasnt our product,” Grenell wrote on Twitter. “But I already started the declassification for the few we received. They should be released in full, though. The public deserves to see it.”

Flynn recently withdrew his guilty plea, in which he admitted to lying to the FBI about the contents of his calls with Russian ambassador Sergey Kislyak, including whether the two men discussed sanctions. Only select portions of his the transcripts have been released as part of the court proceedings in Flynns case.

Flynns defense attorney, Sidney Powell, on May 20 joined the call for the release of the full transcripts.

“I think the reason we havent seen [the transcripts] is because the word sanctions doesnt even appear in them,” Powell told SiriusXMs “The Dan Abrams Show”. “I would love to see the release of that transcript.”

Flynn pleaded guilty to a list of false statements in late 2017, including ones saying that he and Kislyak discussed sanctions.

Notably, Grenell pointed out that the U.S. intelligence community is not in possession of all of the transcripts and summaries of Flynns calls, which suggests that some of the information was collected by a foreign intelligence service.

The Department of Justice (DOJ) on May 7 moved to dismiss the charges against Flynn, arguing that the FBI had no basis to conduct the interview during which he allegedly lied. The departments motion was accompanied by a trove of documents which extensively substantiate the allegation that Flynn was set up by senior Obama administration holdovers.

The judge in Flynns case, Emmet Sullivan, has not ruled on the DOJs motion to dismiss the case and has instead appointed an amicus curiae (Friend of Court), former federal Judge John Gleeson, to argue the case against dismissal and whether Flynn should be charged with perjury. Flynns attorneys appealed for intervention from a circuit court, which in turn issued a rare order calling on Sullivan to explain his actions.