WASHINGTON — President Donald Trumps “America first” trade crackdown increasingly has the look of a first-rate campaign issue for Democrats in their uphill bid to take the Senate this fall.

Democratic senators and candidates in competitive races have pounced on Trumps plans to slap tariffs on U.S. allies, saying they are a drag on jobs and the economy in their states, all of which Trump won in 2016. Republicans are struggling to respond, not wanting to cross the president even as theyre ideologically in favor of free trade. And the leaders of some conservative organizations likely to invest heavily in Senate races, including the Koch brothers political network, are concerned that an economic backlash could damage Republican candidates in a number of key races.

Still, Republicans contend that Trump won these states, and the White House, largely thanks to his “America first” trade rhetoric, and that he remains overwhelmingly popular with the voters who approved of that message 18 months ago. But Democrats think that support will diminish if a trade war hits voters in their pocketbooks.

The case is stark in states like North Dakota, Missouri and Tennessee, homes to three battleground Senate contests that could be directly affected by Trumps tariff plan.

“I think right now anyone who objectively looks at North Dakotas economics knows that this trade policy is not good for North Dakota,” Senator Heidi Heitkamp, a Democrat, said in an interview. In a state Trump won by nearly 40 points, she has staked her reelection bid on a message of being willing to work with Trump when she agrees with him and stand up to him when she doesnt. On tariffs, shes chosen to speak out.

“I think youve got to be aggressive and make your voice known and make these concerns known,” Heitkamp added. “My position is that when I see something that threatens my state economically, Im going to be very aggressive in talking about it.”

Yet Republican candidates in those races are generally defending the president. They say he should have space to negotiate, and endorse his broader trade policy, even as some admit that they dont like tariffs. In states with critical Senate races where the president remains largely popular, Republicans are counting on Trump supporters in November.

Representative Kevin Cramer, Heitkamps challenger in the fall, has largely backed the presidents actions, and he accused Heitkamp of politicizing the issue. The Republican lawmaker has labeled concern about the tariffs “hysteria” and said negative reactions have not been helpful to Trumps negotiating position or to volatile markets. Democrats have harshly criticized Cramers use of the word “hysteria” as callous to the states economic interests.

Cramer said in an interview that North Dakota farmers with whom he speaks say theyve been getting “ripped off” and support the presidents broader goals. Still, he said the tariffs could have a detrimental economic impact if theyre in place long term, and that theres “anxiety” about where the policy will lead.

“Im always concerned about tariffs,” Cramer said. “I think theyre a lousy weapon in a trade war. But if they can be used in the short term as negotiating leverage so we can get a better deal for the American farmer, I want to help the president do that.”

“If he wants to go out there and highlight the fact that Missouri farmers need a better deal and deserve something better than the way theyre being treated, I think hes on the right track” — Attorney General Josh Hawley

In Missouri, Senator Claire McCaskill told POLITICO that farmers are “very worried” that tariffs will hurt their bottom line. In particular, she said tariffs against Canada, where Missourians export corn, soybeans and other commodities, would hurt her state.

“If they retaliate it will be a direct hit on my state and it will be very painful,” McCaskill said. She said she understood the desire to go after “cheaters” like China but dismissed the tariffs against U.S. allies. “This notion that were going to declare a trade war with Canada when my state is so dependent on Canadian exports is really worrisome.”

But her opponent, Attorney General Josh Hawley, backs the presidents approach. He said Missouri farmers are already getting a raw deal, pointing to Canadian tariffs against dairy exports. He said ultimately hell judge a deal by the end result, but said Missouri farmers hes spoken to are supportive of Trump trying to “shake things up.”

“Well judge the deal that he gets,” Hawley said. “If he wants to go out there and highlight the fact that Missouri farmers need a better deal and deserve something better than the way theyre being treated, I think hes on the right track.”

Hawley also accused McCaskill of politicizing the issue and argued she has ignored farm interests in the state. Blake Hurst, president of the Missouri Farm Bureau — a group that endorsed both of McCaskills previous opponents — said he has spoken with her only twice since her last election and that McCaskill didnt appear at a meeting with the group when they were in Washington in March. McCaskills office said she was unable to attend due to a conflict but that her staff attended the event and that she spoke with Hurst directly and attended a meeting with him last year.

“Bad policy is usually bad politics and that is absolutely the case with these tariffs” — Tim Phillips, president of Americans for Prosperity

Hurst said those in the agriculture business are “very concerned” with Trumps rhetoric on trade, and “very questioning” of whether his strategy would be successful. He called last weeks public feud with Canada “upsetting” because its a large export market, but he said the majority of Missourians would give Trump the benefit of the doubt.

“I think that so far, Trumps actions on trade, however disturbing they have been to farmers, have met from approval from the average voter in Missouri,” Hurst said. “I dont think hes hurt himself politically so far.”

Other Republicans worry the hurt could come soon. Tim Phillips, president of Americans for Prosperity, the main arm of the Koch political network, said he supports the president on taxes and regulations, but the tariffs could wipe out otherwise positive economic agenda.

“Bad policy is usually bad politics and that is absolutely the case with these tariffs,” Phillips said. “Most of the key states in play will be negatively impacted by the tariffs and by the trade war that were already seeing expand.”

Dan Eberhart, a major Republican donor and ally of several Senate campaigns, including Cramers, said he opposes the tariffs and that Republican candidates have been put in a bind. 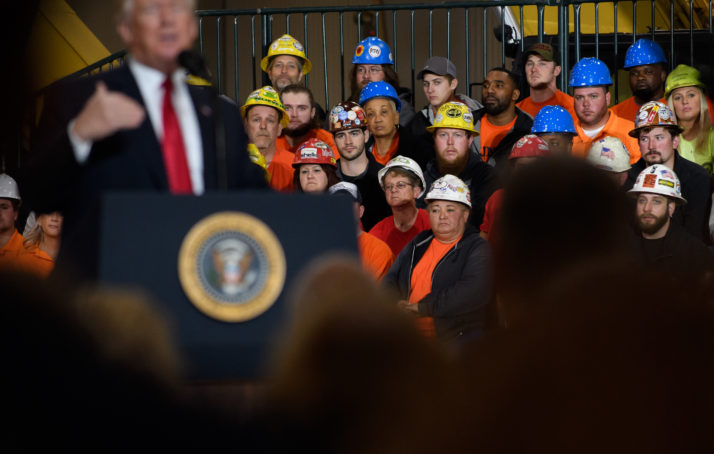 “I think its really difficult for these Senate candidates because theyre generally caught between a popular Trump and a tariff policy that people oppose and may not be the best thing for the pocketbooks for people in their states.”

In Tennessee, former Governor Phil Bredesen, the Democratic candidate in the race to replace retiring Senator Bob Corker, seized on the issue, calling the tariffs a “tax on Tennesseans.” Corker unsuccessfully pushed for a vote on legislation to give Congress a check on the presidents tariffs, an effort Bredesen willingly endorsed.

His opponent, Representative Marsha Blackburn, has taken the same route as other Republicans, saying that shes not a fan of tariffs but supports the presidents broader goals and believes he should be given room to negotiate. In a Twitter video last week, she highlighted meetings shed had with Commerce Secretary Wilbur Ross to talk about applications for exemptions from the tariffs. But the states Democratic Party has attacked her, challenging her to take a stronger stance on the issue.

Democrats are not universally opposed to Trumps trade action. In Ohio, a manufacturing state Trump won handily in 2016, Senator Sherrod Brown is an ally on tariffs, though hes critical of the presidents ad hoc approach and doesnt support taking aim at U.S. allies. He has maneuvered to outflank Representative Jim Renacci, the Trump-endorsed Republican in the race, on the broader issue of trade — he recently released a TV ad highlighting his opposition to past trade deals and touting himself as an ally of steelworkers.

He negotiates a little different than most and in the end, he understands this is about American jobs” — U.S. Representative Jim Renacci

Renacci, for his part, had a message similar to those of his fellow Republicans, taking a wait-and-see approach while supporting giving the president room to negotiate.

Read this next: Macedonia name deal is only end of beginning