DAVOS, Switzerland — Populist movements around the world, left and right, disagree in detail but are united around one big idea: The political and economic elites running modern societies are very powerful people who know what they are doing.

A different possibility, however, hung in the alpine air this week at the annual convening of elites here at the World Economic Forum: These alleged masters of the universe came off nearly as perplexed and anxious about the future as the populist forces inveighing against them.

They have money. They have entourages. They have commanding views, both literal (from mountain chalets here) and metaphorical (from government offices and CEO suites back home).

That doesnt mean they have a clue.

The general theme of people being buffeted by their circumstances rather than being the master of them was reinforced in part by who was here.

Foreboding about the future was a prevailing theme at this years Davos, sometimes even with dash of dystopian prophecy. This brooding was accompanied often, in speeches and interviews, by a rueful acknowledgment that government leaders are desperately improvising — often with bleak results — to meet the political crises of the moment, much less the long-term technological and climatological challenges of the age.

Little wonder that, instead of triumphant optimism about the forces of globalization sometimes associated with Davos, some voices here made it sound like modern life is on a toboggan ride to hell.

“Everybody agrees that there are dark clouds on the horizon, and there are risks,” said United Nations Secretary-General António Guterres, in an address here Thursday. 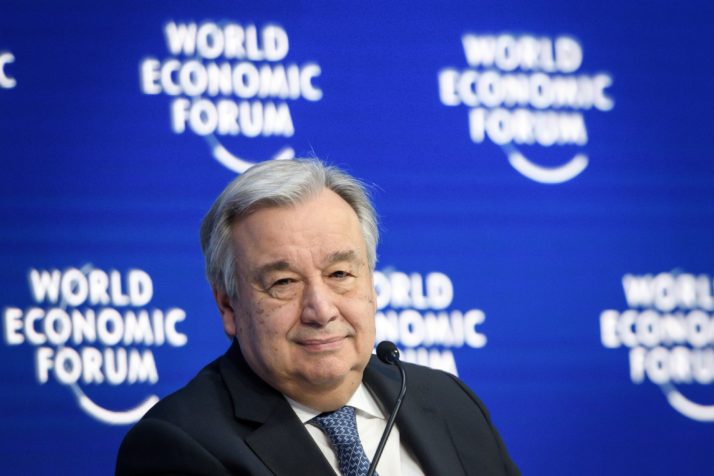 That specific line was on the global economy. But it was woven into a speech that spoke to a much larger set of anxieties about the world. On climate change, he said, “I believe we are losing the race … And we have this paradox: The reality is proving to be worse than scientists had foreseen, and all the last indicators show that.”

When it comes to the prospect of technologies like artificial intelligence to prevent terrorism and humanitarian crises, Guterres lamented, the solutions require “more and more interrelated” actions among nations “but at the same time the response is more and more fragmented.”

Guterres sounded more downbeat than most voices. But the general theme of people being buffeted by their circumstances rather than being the master of them was reinforced in part by who was here.

In other years, Facebook COO Cheryl Sandberg would be treated like royalty. This year she was the one bowing, acknowledging in speeches and interviews that Facebook had made mistakes in not preventing data breaches and manipulation of audiences by Russian agents. But she said overall that Facebook is a force for good and current leadership is in best position to fix the problems with social media. The world is “in a fundamental phase of rewriting the rules about tech,” she told Die Welt.

Good luck with that. But there arent too many effective models of governance at a moment of implacable conflicts within and between countries — a fact that was highlighted even more by who was not at Davos.

Not Donald Trump, who stayed at home while he is presiding over Washington paralysis in the partial government shutdown. Not British Prime Minister Theresa May, trying to dig out from London paralysis over a plan to implement Britains exit from the European Union. Not French President Emanuel Macron, facing street protests from Yellow Jacket activists calling for economic justice.

One shouldnt overstate the dour mood at Davos. It still featured a nonstop flow of lavish corporate parties, filled with the likes of JPMorganChase CEO Jamie Dimon and actor Matt Damon. Anthony Scaramucci returned for his annual wine-tasting party. None of these gentlemen seemed particularly downbeat.