A senior Russian elections official has told reporters that Communist-backed presidential candidate Pavel Grudinin failed to inform the authorities about his cash and gold accounts in Swiss banks.

“The Federal Tax Service has addressed the Swiss authorities and Swiss colleagues have reported that apart from two bank accounts that we had already mentioned, including on the elections posters, Pavel Grudinin had 11 more accounts. Thus, as of December 31, 2017 Pavel Grudinin had 13 accounts in Swiss banks,” a member of the Russian Central Elections Commission, Aleksandr Kinev, was quoted as saying by TASS on Monday.

“The message that we got from our Swiss colleagues reads that Grudinin kept various assets on his accounts. One of these accounts was kept in precious metals, in particular gold,” Kinev told reporters.

However, the official noted that the report from Switzerland only detailed the state of Grudinin’s accounts on December 31 and earlier. “On January 13 Pavel Grudinin filed in a statement that read that he possessed no such accounts, but we have no documents confirming their absence,” he said.

Kinev also told reporters that the issue with Grudinin’s foreign assets will be discussed at the Central Elections Commission’s session on March 7, adding that most likely the commission’s members will ask regional elections bodies to put the information about Grudinin’s bank accounts on campaign posters, along with a statement that the candidate had attempted to file false information about himself to the state elections authorities.

Also on Monday, Russian tabloid news site Life.ru reported that it possessed documents proving that Grudinin was a client of UBS Switzerland AG bank, and that apart from various currencies the candidate kept their over 174 troy ounces (about 5.4kg) in gold bars. Life.ru estimated the price of this gold at about $230,000.

Life.ru also recalled that in his campaign materials Grudinin had emphasized that it was important to stop the capital outflow from the country and take urgent measures to force Russian investors to bring back the money that they keep in the US and European banks, as well as in various offshore locations. 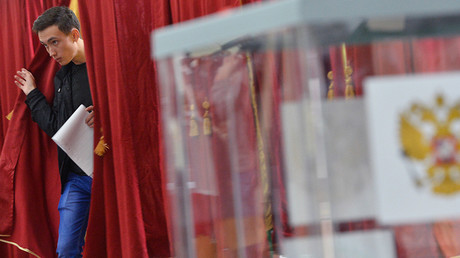 Grudinin is the head and major stakeholder of a large and successful agricultural enterprise in suburban Moscow. His firm is called “Lenin Soviet Farm”, but in reality it is a standard joint-stock company, with owners, managers and hired workers, that has become rich due to the proximity to the capital and several successful land sales. According to information on candidates’ finances, released by the committee, Grudinin’s income over the past five years amounted to some 157.5 million rubles (US$2.8 million).

At the same time, Grudinin heavily uses his company in the election campaign, claiming that he has managed to build “an island of socialism” in modern Russia.

Grudinin is not a member of the Communist Party of the Russian Federation that backs his nomination. He earlier dismissed this fact as insignificant, saying that “it is not important what party certificate you hold, what is important is how you see yourself.”