The end of summer holidays and return to school during the pandemic is a test for every European city. But Brussels is finding the transition extra challenging.

To start with, the mayors of Brussels 19 different communes have each been experimenting with various ways of controlling the coronavirus. And soon, theres the prospect of thousands of Eurocrats coming back.

Beyond Brussels, Belgium has been struggling since mid-July with a fresh spike of infections, sparking talk of a “second wave.” Antwerp was the first to be hard hit, but since mid-August, the rate of infections has increased in Brussels as well. The number of infections in the city remains relatively high, although the growth rate is starting to slow again. According to numbers released on Friday, the infection rate in Brussels is 74 per 100,000 — compared with 60 for Belgium as a whole.

The situation is still “manageable,” said virologist Steven Van Gucht on Wednesday. But he warned that Brussels has to remain careful, given that its “a complex city with a large turnover of people.”

Inge Neven of the Brussels health inspectorate struck a similar note, calling on Belgians returning from holidays abroad to get tested and quarantine themselves if coming from a “red zone.” At present, only 40 percent of that group get tested, she warned.

Both virologists have also pointed out the gaping differences across Brussels and the broader surrounding capital region, home to 1.2 million people. The city is known for the wide income gap between the residents of the greener and wealthier communes in the east and southeast of Brussels (where most Eurocrats live) and the working-class communes along the Brussels Canal, in the northwest of the city.

Since the pandemic hit, that gap between the haves and the have-nots has also been reflected in the rate of infections. The rate has been much higher in the poorer, more crowded neighborhoods — often by a factor of two or three compared with the richer communes. Experts see a high risk due to the density of the population and more cramped living conditions.

In fact, almost all of the Brussels neighborhoods with an infection rate of over 50 per 100,000 are in these poorer communes.

“We especially have to remain vigilant for Schaerbeek, Molenbeek and the [inner] city of Brussels,” said Van Gucht.

POLITICO took a closer look at how this diverse city is doing in its fight against the coronavirus.

The Haves: Preparing for the non-rentrée

While the broad, leafy avenues in Watermael or the Royal Park of Tervuren might remind tourists of the French park of Versailles, the gray industrial buildings and rough neighborhoods adjacent to Gare du Nord bring to mind the Paris banlieues.

Those impressions are reflected in the statistics. The average per capita annual income in the wealthier communes of Brussels, such as Uccle, Woluwé-Saint-Lambert and Woluwé-Saint-Pierre, is about twice as much as income in the poorest Brussels commune of Saint-Josse, according to the most recent numbers from the Belgian office of statistics.

At the same time, the population in the poorer communes is growing much more quickly, leading to a rapid rise in population density. While Saint-Josse has a population of almost 24,000 residents per square kilometer, the density of prosperous Woluwé-Saint-Lambert is only a third of that.

These circumstances make social distancing and teleworking in wealthier districts easier, allowing residents to focus on the other challenges of the lockdown, note experts.

In Woluwé-Saint-Lambert, Mayor Olivier Maingain says that decisions on whether events can go ahead or not, and who should get priority over communal premises, are among his every day worries. While the universities in his commune required communal halls to allow for social distancing between students when classes resume, theater owners are asking why their venues must remain closed.

“Theres a real problem of consistency,” he admitted. “How do you want to make people understand that in the private sphere they need to respect the bubble of five people, but in restaurants they can [go] to twice the bubble?”

The wealthier communes also struggle with the coming and going of thousands of Eurocrats, who could potentially reintroduce the virus. At this point, its not clear how many of them will return to Brussels starting this week. 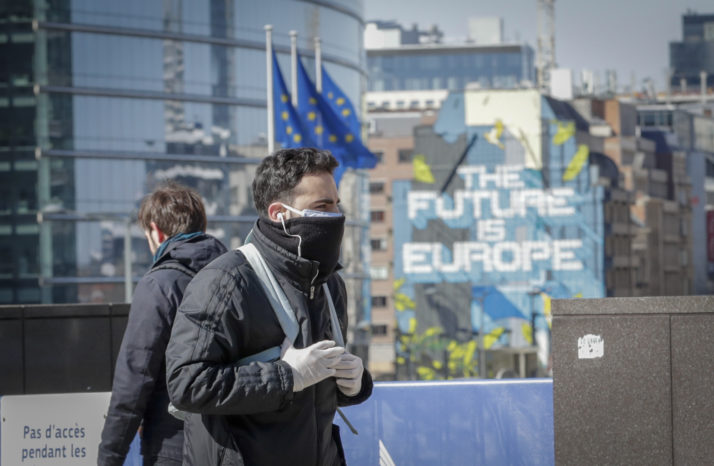 In Etterbeek, where most EU institutions are based, the commune is actually preparing for a “non-rentrée,” said Mayor Vincent De Wolf. Since the European Centre for Disease Prevention and Control (ECDC) designated Brussels as a red zone earlier this month, its likely the majority of EU staff wont return, at least not before the end of the year, he said.

Accordingly, the impact on small businesses relying on EU employees and their families is dramatic, since most customers “have disappeared,” De Wolf said.

In addition, teleworking has drastically changed peoples behaviors. Beyond the EU offices, most office workers wont want to return once the crisis ends.

“If teleworking were to continue for months, the viability of businesses will be hard hit,” he added.

The Have-nots: Lockdown here was hell

On the other side of town, Saint Josse, Molenbeek, Anderlecht, Schaerbeek and Brussels city center dont just top the ranking of poorest communes within the Brussels region. Theyre also in the top 10 of the poorest municipalities of Belgium.

A good example is Molenbeek, which became notorious after the Paris terror attacks in 2015, when it was discovered that it had been the planning base. An ethnically mixed district to the northwest of Brussels, its high unemployment rate and lack of opportunities for young people were seen as fueling Islamic radicalism. More prosaically, its also a typical transit commune, where new migrants arrive when theyre still struggling to make ends meet but leave once they feel their families are better off.

Molenbeek has over 100,000 inhabitants, often with different generations packed in tight housing. This was an extra challenge during the pandemic, according to Mayor Catherine Moureaux, who stressed that the lockdown was much more difficult there than for wealthier residents elsewhere.

Moureaux, a doctor herself, was among those who warned early of the virus risk in Belgium.

“Lockdown here was hell,” Moureaux said in her office overlooking the Place Communale of Molenbeek, which was flooded by TV crews back in 2015.