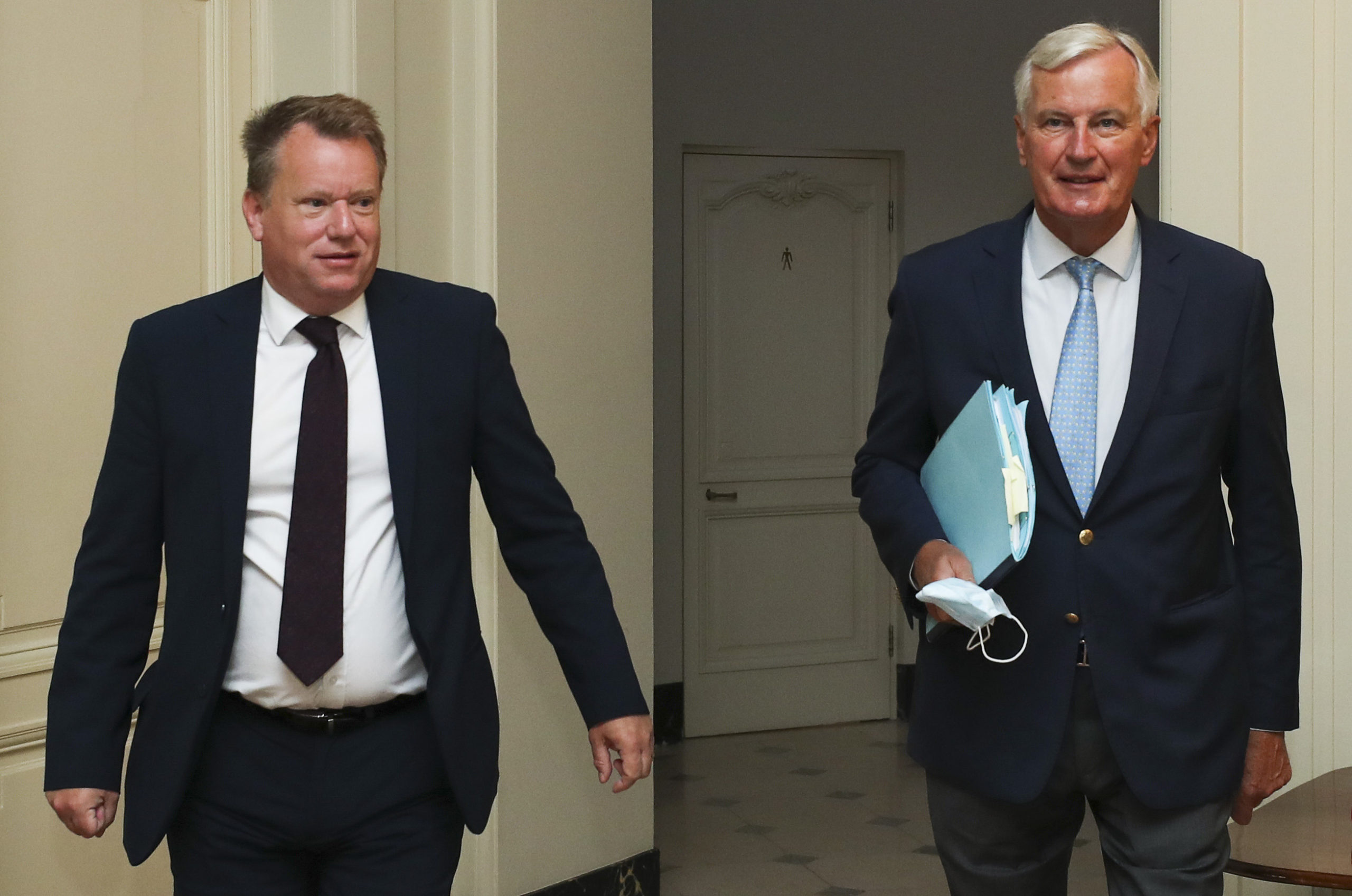 LONDON — Its all set up for a last-gasp dash for a deal in October. Either that, or no deal at all.

The seventh formal round of post-Brexit future relationship talks between the U.K. and the EU wrapped up Friday with the familiar stalemate and mutual blame. So familiar in fact, it was almost a greatest hits album, with EU chief negotiator Michel Barnier dusting off his favorite line about the ticking clock, and even covering the Theresa May classic: “Brexit means Brexit.”

The British side agrees that “Brexit means Brexit” — and therefore they are deeply frustrated at Barniers attempt (as they see it) to bind the U.K. to much the same set of rules as EU members in terms of its ability to subsidize industry and control British fishing waters.

David Frost, the U.K.s chief negotiator, said Brussels position was now that talks could not substantively progress in any area until the U.K. backs down and accepts “continuity with EU state aid and fisheries policy.” Downing Street — determined in particular to have leeway on state subsidies to assist the coronavirus recovery — insist they will do no such thing. So talks are frozen. The EUs stance, Frost said “makes it unnecessarily difficult to make progress.”

Barnier, spelling out the EUs position from the press podium at European Commission HQ, called a level-playing field on state aid and subsidies “a non-negotiable precondition to grant access to our market of 450 million citizens, given the U.K.s geographic proximity and intensity of our economic exchanges.” He declared himself “disappointed and concerned and surprised” by the state of play.

The prediction appears to be that Downing Street will accept that no-deal will hurt them more than it hurts the EU — and cave in.

“I see that time is passing by, and that we are starting to take the risk of not being able to ratify the treaty by the end of the year,” he said.

Both sides are now eyeing Octobers European Council meeting as a de facto deadline, to allow time to pin the deal down before the transition period ends at 11 p.m. U.K. time on December 31 — the moment Brexit rule changes will actually start to be felt by the businesses and citizens of the U.K. and the EU.

Brexit deadlines have come and gone in the past and given the tight timescales and other preoccupations, no-one can rule out that October deadline slipping. But, Barnier added: “This is a long complex task, any delay beyond the end of October, would entail a serious risk as to the successful outcome of this process.”

The next formal round of talks will take place in London from September 7. Between now and then, Barnier, Frost and their teams will remain in touch, U.K. officials said. In London, the idea of an accord being struck in September is not ruled out, but given how much distance remains between the two sides, the final run-in to the European Council summit — on October 15 and 16 — looks more likely. If that sounds familiar, its because it is: The past two fall summits have been dominated by Brexit. Last years was the historic one at which Boris Johnson clinched the Withdrawal Agreement that underpins the current talks.

For now — as so often before in this process — Brussels thinks it holds most of the cards. Brexit talks have never been a negotiation between equals and EU officials believe the U.K. “desperately” needs a deal (as one official put it last week); a fact that will force them to compromise sooner or later.

In this light, Barniers chiding press conference comments and the refusal to engage substantively on other matters until the U.K. has backed down on state aid and fisheries can all be read simply as further means of applying pressure on London. The prediction appears to be that Downing Street will accept that no-deal will hurt them more than it hurts the EU — and cave in.