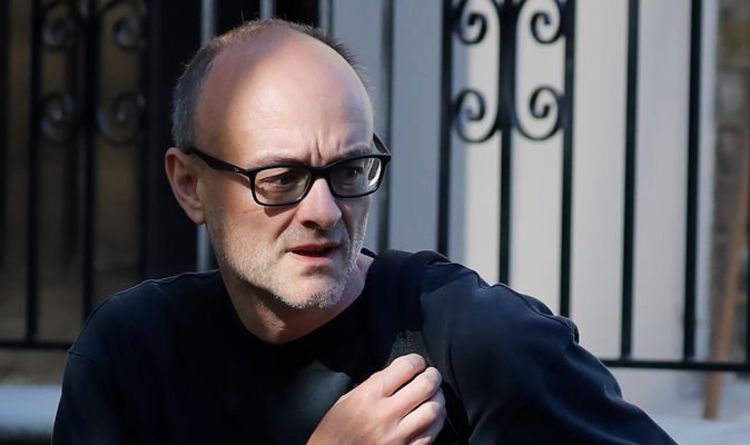 This comes after public attention surrounded Mr Cummings over a trip he took from London to Durham whilst he and his wife were self-isolating after experiencing COVID-19 symptoms. Now, Mr Johnson wants his aide to stay out of the public eye and to avoid any further incidents. A senior Downing Street source told the Mail on Sunday: “Doms been firmly put in his place.”
[contfnewc]

According to the newspaper, Mr Cummings has been blocked from making media appearances and writing blog posts.

A Number 10 insider explained: “The Prime Minister has made it absolutely clear that Dominic cannot be the story again.

“He will not tolerate it.

“If it happens again, hes out.”

Mr Cummings says he went to Durham with his family so he could be near his parents if child care became too difficult for him and his wife.

The news of Mr Cummings trip first broke as a result of a joint journalistic investigation by The Guardian and Daily Mirror.

When the story broke, the BBCs Laura Kuenssberg said she had been told Mr Cummings did not break lockdown regulations as he stayed in a separate building on his parents property in Durham.

Durham Police have said: “Durham constabulary have examined the circumstances surrounding the journey to Barnard Castle (including ANPR [automatic number plate recognition], witness evidence and a review of Mr Cummingss press conference on 25 May 2020) and have concluded that there might have been a minor breach of the regulations that would have warranted police intervention.

“Durham constabulary view this as minor because there was no apparent breach of social distancing.

“Had a Durham constabulary police officer stopped Mr Cummings driving to or from Barnard Castle, the officer would have spoken to him, and, having established the facts, likely advised Mr Cummings to return to the address in Durham, providing advice on the dangers of travelling during the pandemic crisis. Had this advice been accepted by Mr Cummings, no enforcement action would have been taken.”

Nick Thomas-Symonds, the Shadow Home Secretary, was one of a number of opposition MPs to call for Mr Cummings to resign or be sacked commenting: “The police have confirmed what we all knew, that Dominic Cummings broke the rules he helped to write. The country cannot afford for this saga to carry on. Only Boris Johnson can draw a line under it.

“Keir Starmer has said that if he was prime minister, he would have sacked Dominic Cummings. Boris Johnson should follow that advice. If he does not act then he will send a clear message that there is one rule for his closest adviser and another for the British people.”

A Number 10 spokesman said in a statement: The police have made clear they are taking no action against Mr Cummings over his self-isolation and that going to Durham did not breach the regulations.

“The prime minister has said he believes Mr Cummings behaved reasonably and legally given all the circumstances and he regards this issue as closed.”
Mr Cummings was appointed a senior advisor to Mr Johnson shortly after the latter became Prime Minister.

He has been described as the mastermind behind Brexit for his role as Vote Leave campaign director.

Mr Cummings has also previously spent time as an advisor to current Chancellor of the Duchy of Lancaster Michael Gove.

This included a period as chief of staff during Mr Goves time as Education Secretary.

He was also cited as a key figure in the campaign against the formation of a north east England regional assembly in 2004.

The most recent YouGov poll on May 26 puts the Tory voting intention at 44 percent.