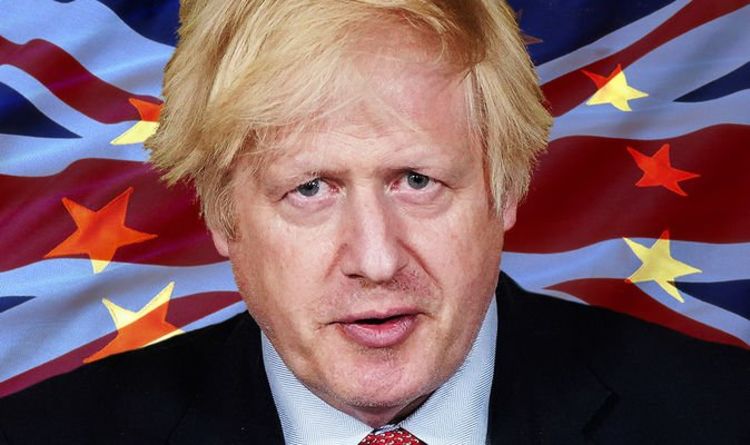 BORIS JOHNSON could “blink at the last minute but present it as a win” as post-Brexit trade talks between the UK and EU threaten to collapse that could result in a disastrous no deal scenario for both sides, political experts have warned.

The UK and European Union began negotiations on the future relationship in March after Boris Johnson delivered on his promise to “get Brexit done” on January 31. But talks have quickly fallen apart, with London and Brussels trading crushing blows and brutal insults over their negotiating stances and demands for certain elements in any post-Brexit agreement. Key areas such as the level playing field, state aid, tax and access to the single market all still remain unresolved – with no solution in sight.
[contfnewc]

Pressure has intensified, with the Prime Minister and his UK negotiating team continuing to insist a post-Brexit trade deal with the EU must be signed before the end of the transition period on December 31, 2020.

Earlier this week, the EU’s chief Brexit negotiator Michel Barnier wrote to opposition political parties in the UK to say Brussels is open to extending the transition period by a further two years.

But this was immediately slapped down by Boris Johnson and the UK’s own chief Brexit negotiator David Frost.

A group of Remain ministers, led by Liberal Democrat acting co-leader Sir Ed Davey, are also trying to squeeze a Bill through Parliament in a last-ditch and desperate attempt to delay Brexit by up to two years.

The second reading of this Bill is due to take place on June 12 – less than three weeks before the deadline by which the UK can request an extension to the transition period.

Trade talks could reach a critical point on Monday when the next round of virtual negotiations begin, with Mr Frost continuing to warn the EU needs to dramatically change its stance in negotiations and relent on a number of areas if further progress is to be made.

Tim Bale, deputy director of the UK in a Changing Europe think tank and professor of politics at Queen Mary University of London told Express.co.uk: “Talks could collapse but it’s in both sides’ interest to keep the negotiations going in the hope that they can come up with something at the eleventh hour.

“The UK could walk away but that would be unwise – both diplomatically and economically.

“In the end, though, Johnson will either do what he did with the Withdrawal Agreement – blink at the last minute but present it as a win.

“The other alternative is he will take the UK out of the single market and customs union without a deal, and hope that the dire predictions as to the consequences are overplayed.”

Kostas Maronitis, lecturer in politics and international relations at Leeds Trinity University, warned there is a real risk trade negotiations will completely collapse over the coming weeks as time runs out to get one signed.

He said: “What needs to be considered is not only the timeline of negotiations but also the time the UK and EU member-states have at their disposal to prepare for the new trade conditions and terms.

“If there isnt any progress both sides will need to start preparing for the worst-case scenario of a no-deal Brexit trade negotiations.

“In other words, a no deal in reality would mean a bad deal for both sides.”

Patrick Sullivan, CEO of the Westminster think tank Parliament Street, warned the EU could counter the UK by taking talks “right up to the wire”.

He said: “We know from the withdrawal bill fiasco that the EU takes things right up until the wire. The UK government know this.

“The UKs status as a net importer of EU consumer goods has given government Brexit negotiators confidence that the EU will not erect trade barriers in the form of tariffs when the transition period concludes in December.”

John Macdonald, Head of Government Affairs at the Adam Smith Institute think tank, believes the success and future of trade talks could be heavily determined over fishing rights post-Brexit.

He said: “As we approach the final week of talks before the June summit, talks are likely to collapse unless there is compromise on a trade deal and fisheries agreement.

“David Frost has admitted it is unlikely a fisheries agreement will be met by July 1st.