LONDON — Its lucky Matthew Gould likes, as he once put it, being “at the center of things.”

Formerly an ambitious, high-flying diplomat and more recently a spotlight-shunning civil servant, Gould has found himself central to the U.K.s coronavirus response as chief executive of NHSX, the health services tech innovations wing.

Founded only last year, the unit is now central to the U.K.s coronavirus response, not least with its latest assignment: delivering a coronavirus contact-tracing app, billed as a central pillar of the U.K.s “test, track and trace” strategy that could — in time — help negate the need for continuing the economy-suffocating lockdown. Though Gould knew, according to friends and colleagues, that he had a challenge on his hands when he took the NHSX job, he could never have imagined hed be commanding a key front in the war against a deadly pandemic.

His entrepreneurialism and ambition was noted by everyone POLITICO spoke to for this article.

His career up until now — encompassing Iranian hostage negotiations, the embassy in Tel Aviv and Tony Blairs Downing Street — may have prepared him for the pressures of such a task better than many denizens of Whitehall. A school friend of former Chancellor George Osborne, he was handpicked for the NHSX role by another tech-obsessed Osborne ally, Health Secretary Matt Hancock.

With their contact-tracing app due to go live across the U.K. in days, Prime Minister Boris Johnson, the British public and the wider world are all waiting to see how “the two Matts” have risen to the challenge.

Until it was thrust into the front line of the U.K. governments coronavirus response, few outside the health and tech policy worlds had heard of the hipster-sounding NHSX.

Officially launched in July 2019, it was one of Hancocks big ideas after his transfer from the Department for Culture, Media and Sport (DCMS) — where he built a persona as the U.K. Cabinets leading tech-head — to leading the National Health Service, which has a long record of doomed attempts at top-down tech innovations.

Hancock was frustrated at “at the plethora of bodies” within the NHS that had a say over tech policy, said Matthew Honeyman, researcher at the health think tank the Kings Fund. NHSX “was very much a Matt Hancock thing,” said one government official. The “X,” Hancock once explained, stands for “user experience.”

Instead of each individual hospital and provider doing things differently (some still using fax machines and mountains of paper), Hancock wanted an organization at the center to push through health tech reforms that could improve treatments, alter the way patients interacted with services and make life easier for NHS staff, many of whom had ancient computer systems.

He also wanted a non-health sector outsider to lead it and give fresh perspective, colleagues said. So he turned to Gould, one of his top officials at DCMS, where the former diplomat had served as director general of digital and media since returning from a five-year stint as the U.K.s ambassador to Israel.

Gould took the NHSX role despite being tipped by some to become permanent secretary at DCMS and will, according to another school friend, now be “relishing” his place at the center of events.

His entrepreneurialism and ambition was noted by everyone POLITICO spoke to for this article, and one person who knew him during his days as the U.K.s deputy head of mission in Iran said that the friendship with Osborne was also a kind of friendly rivalry, dating back to their time in the same year at the elite St Pauls independent school in London.

For a time, Gould had by far the more interesting career. His stint in Iran saw him negotiate the release of six Royal Marines and two Royal Navy sailors taken hostage by the Iranian Revolutionary Guard, and he dealt firsthand with the Islamic Republics nuclear negotiating team, led at the time by a high-flying cleric called Hassan Rouhani.

“When you get off a plane and into a taxi and turn on the BBC news, and item number one on the worldwide news is the fact that youve just got off a plane, you feel very much like you are the center of things and need to deliver,” Gould told Civil Service World in an interview just before the pandemic struck, in reference to the hostage situation.

Will the tech work?

Now hes back at the center of things.

“NHSXs time has come,” said one government official, who was of the view that the contact-tracing app — now undergoing trials on the Isle of Wight in the south of England — might not have been finished yet had NHSX not existed as the “natural home” for the project.

Under Gould, the organization was already in the middle of “a big recruitment drive” before the pandemic struck, according to Honeyman. It was “deliberately casting the net as wide as possible to include people from outside the health and care world.” Some key roles are yet to be filled, including its first chief information officer who is due to arrive this summer. 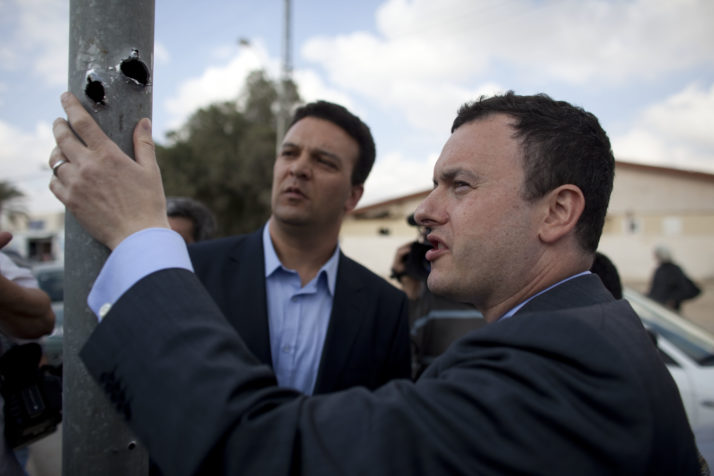 Matthew Gould visits the site where a rocket fired by Palestinian militants from the Gaza Strip hit, in 2011 | Uriel Sinai/Getty Images

The app will be available for the Isle of Wights 140,000 residents to download on Thursday, and then — if all goes well — rolled out nationally by mid-May. Close attention is being paid to the U.K.s centralized approach to the app, meaning the anonymized data will be uploaded to a central government database. Countries are split between those going for this approach (France is trying something similar) and those like Germany, which eventually decided against it and instead are pursuing a decentralized approach backed by tech giants Apple and Google, which sees data kept on the mobile phones across the network.

The centralized approach is intended to allow government, via NHSX, to get a better handle on the national picture of the epidemic, it is hoped, but big questions remain about whether the app will work. Tech experts have expressed concern that the technology, which uses Bluetooth to signal to other phones they have recently been in contact with someone with symptoms, wont work unless someone is actively using the app, something the team building it say they can overcome.

Then there are privacy worries and possible problems with international collaboration if and when people start moving between national jurisdictions.

Goulds own amateurs appreciation for all things tech was fostered during his time in Israel.

Sign-up will also be key. It is estimated that 60 percent of the population, or 80 percent of smartphone users, need to download for it to be optimally effective. ThRead More – Source
[contf]
[contfnew]