The EUs landmark trade accord with Mercosur has met opposition in France, Austria and Ireland — but an even more immediate threat to the deal is now emerging in South America.

National elections in Argentina this Sunday could spell the triumphant return of protectionist policies in the continents second-largest economy, as polls predict a comeback for the left-wing politician Cristina Kirchner, who governed the country from 2007 to 2015.

During her presidency, which was plagued with corruption charges that are still pending (and which she strongly denies), Kirchner embraced a militant protectionist agenda and allied the country to other far-left Latin American leaders in Bolivia and Venezuela, among others.

Officially, she is the running-mate of the Peronist partys presidential candidate Alberto Fernández, but if they beat the conservative, pro-business incumbent Mauricio Macri and she is installed as vice president, Kirchner would likely become the real power-broker in Argentina.

The latest polls predict that Fernández and Kirchner could win by a lead of 18-20 percentage points, raising concerns that Argentina could soon reverse the market openings created under Macri and flip back to the protectionist policies championed by Kirchner during her previous tenure. The business-friendly incumbent has sought to lead the country out of economic isolation by pushing reforms and forcefully promoted the free trade deal with the EU.

The warning from Brazil highlights the latest trouble for the deal, which was concluded in June and is supposed to crack open the highly defensive South American market for European exports.

The ratification of the agreement has already been thrown into doubt by European concerns about deforestation and rainforest fires, a lack of enforceability of environmental clauses as well as a veto by Austrian lawmakers. The accord needs to be approved by EU governments, the European Parliament, some 40 national parliaments across Europe as well as national assemblies in the Mercosur bloc.

But the Argentine election has the potential to derail the accord much sooner, before it even gets to the ratification phase, which is supposed to start in the second half of 2020.

Brazilian President Jair Bolsonaro sounded the alarm this week that Kirchners comeback could not only jeopardize the trade deal but the whole Mercosur bloc, which in addition to Argentina and Brazil includes Paraguay and Uruguay.

“We know that the return of … Cristina Kirchners class to the Argentine government can indeed endanger the entire Mercosur,” he told reporters on Wednesday during a state visit to Japan, according to Brazilian media.

“What we want is that Argentina continues the trade policies of Macri in case the opposition wins,” Bolsonaro said. “If not, we may get together with Paraguay and Uruguay to make a decision,” he added, alluding to a potential scenario under which Brazil and allies could seek to either exclude Argentina from Mercosur, or leave the bloc themselves. 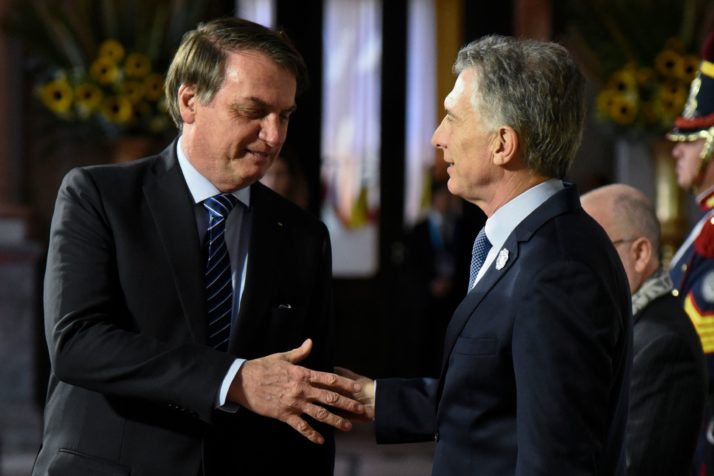 “What we want is that Argentina continues the trade policies of Macri in case the opposition wins,” Bolsonaro said | Stringer/AFP via Getty Images

“If you are possibly putting the entire Mercosur at risk, you have to have an alternative in your pocket,” he said.

The warning from Brazil highlights the latest trouble for the deal, which was concluded in June and is supposed to crack open the highly defensive South American market for European exports, from cars to machinery, while lowering EU agricultural tariffs for Mercosur exports such as beef, sugar and ethanol.

In Argentina, Fernández and Kirchner have criticized the trade deal as surrendering the countrys industrial sector to powerful European competitors for the price of turning Argentina into a simple exporter of agricultural commodities. During a televised election debate last week, Fernández alluded to his previous calls for renegotiating the trade deal: “Im not afraid of re-opening [the agreement],” he said.

The divergences on trade policy further fuel concerns about the overall economic and financial crisis in Argentina. Many Argentinians who once supported Macri now feel disappointment with his promises of reforms because he didnt manage to stop the Argentine peso from crashing in recent years, and the country now looks likely to request another bailout from the International Monetary Fund.

Officials, diplomats and lawmakers in Brussels are observing the situation with concern.

Some observers predict that Fernández and Kirchner will moderate their tone on the Mercosur deal if they get into office.

“Its clear that these are crucial elections,” said Nicola Danti, the vice chair of the European Parliaments delegation for relations with Mercosur. “Argentina is a significant country in the Mercosur bloc … [and] if it was to return to protectionist policies, this would put our agreement in a very fragile situation.”

Danti added that the EU-Mercosur accord was not just a trade deal but also “very important from the political perspective, it defines our strategic partnership with the region.”

One EU diplomat said there were “some serious concerns” about whether the Mercosur deal, which is currently under legal review, could even move into the ratification phase nexRead More – Source