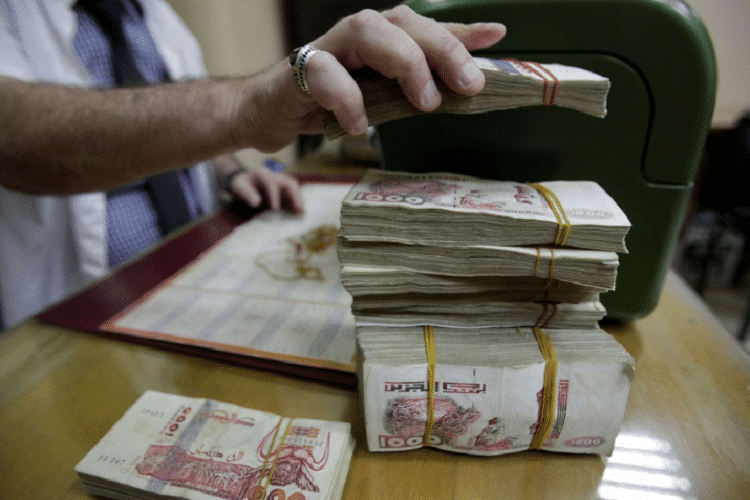 Algeria has been experiencing an intractable liquidity crisis for a year. While the government has been standing idly by, without providing radical solutions, the crisis has intensified this month.

The liquidity crisis greatly affected Algerians, who are facing difficulties securing their daily needs, in light of the deteriorating economic situation in the country due to the pandemic.

The liquidity crisis began in conjunction with the outbreak of the Coronavirus pandemic at the beginning of last year. Citizens resorted to banks to withdraw their salaries and deposits.

Within six months, banks’ liquidity declined from $8 billion to $4.8 billion at the end of December 2020, for the first time in more than 20 years, according to a member of the Association of Banks and Financial Institutions, Baghdad Ammar.

According to a Central Bank report, banks lost 304 billion dinars within six months. This is a great loss that puts the volume of liquidity at historically low levels.

Ammar attributed the high liquidity deficit to “withdrawing financial deposits by savers and economic dealers to face the Coronavirus repercussions, in addition to the continuous increase in the volume of bad loans during the last five years.”

In addition, in the second half of 2020, the government resorted to granting loans to public and private companies stalled due to the pandemic.

A source from the Algerian Post Directorate revealed that the liquidity deficit rose from 10% at the beginning of 2020 to 45% at the end of last February, under pressure from the high rate of daily cash withdrawals in exchange for low revenues of the post office.

The liquidity crisis has turned into a bitter reality that most citizens experience every day waiting for several hours in long lines in front of banks and post offices.

In front of the post office in the area of ​​ Hussein Dey (in the center of the Algerian capital), citizen Jamal Zoghdari stands in a line to withdraw his salary. He says that he has become accustomed to this situation, which lasts for months, at least he waits about two hours in order to withdraw his salary, which does not exceed 30 thousand dinars ($238).

Retired citizen Ammar, refused to say his full name, said that the date of withdrawing the pension has turned into a nightmare for him and millions of Algerians. “Sometimes I stand in front of the post office from before the dawn prayer. I miss my prayers and even my doctor appointments to withdraw a pension that is insufficient for going through the rest of the month, with the high cost of living,” he said.

A source of concern

The crisis did not only affect wage earners and retirees, but extended to traders and investors, who are struggling to provide the necessary liquidity to pay wages, pay tax deductions and health insurance. This is the case of the owner of a workshop for the production of cleaning materials named Mouloud Belabadi.

Belabadi confirmed that the liquidity crisis has become a source of concern for him, as the trust between him and his workers and suppliers has been undermined.

He said that “the liquidity crisis affected the prices that rose, as producers were affected, which made them raise prices to secure the largest amount of money”.

Monia Adad, director of a post office, said that “the General Administration of Post Centers decided to extend the period of wage disbursement and establishing a ceiling to withdrawals according to the volume of liquidity in each center compared to the volume of demand”.

She added that “the volume of liquidity flowing to the center has actually decreased recently, which affected withdrawals and led to long queues daily, especially during the health crisis”.