LONDON — The U.K. government says it is firing on all cylinders to embed artificial intelligence into the National Health Service, with the goal of making the NHS a world leader in AI in five years, spurred on by the newly formed AI Lab.

In the driving seat is Matt Hancock, the health secretary and an ardent exponent of the power of tech to revolutionize the health system.

“We are on the cusp of a huge health tech revolution that could transform patient experience by making the NHS a truly predictive, preventive and personalized health and care service,” declared Hancock in August when first announcing the £250 million lab.

But not everyone is convinced by Hancocks vision of a utopian AI-powered future. Some experts say the lab might not meet such grand expectations.

“The reality is that it cannot deliver what [Hancock] hopes it to do,” said Martin McKee, professor of European public health at the London School of Hygiene and Tropical Medicine. “Theres a real danger that we give a degree of validity to what is frankly the emperors new clothes.”

“There are some very fundamental problems in infrastructure that are not very sexy or glamorous [but] that could bring about huge benefits” — David Spiegelhalter, Cambridge University statistician

With little health policy experience, Hancock was an unlikely candidate for health secretary — and he might not even be in the post after the U.K.s December 12 general election. The AI plan, however, is already in motion no matter who is in power. The opposition Labour Partys manifesto, released Thursday, says of the health sector: “We will complete the confirmed hospital rebuilds and invest more in primary care settings, modern AI, cyber technology and state-of-the-art medical equipment, including more MRI and CT scanners.”

Hancock, however, is no stranger to AI, coming from the digital secretary role and having worked on the U.K.s artificial intelligence strategy as a junior minister.

But using AI within health care is a different beast altogether. The statistician David Spiegelhalter of Cambridge University, who works on systems that can give prognoses to women newly diagnosed with breast cancer, points to a common error with regards to AI in health care.

Just because AI works well in some areas, it doesnt follow that it can be similarly unleashed on medical records, or on the diagnosis and treatment of patients. This is a “potentially dangerous delusion,” said Spiegelhalter.

“I really worry that politicians just believe all this puff,” he added. 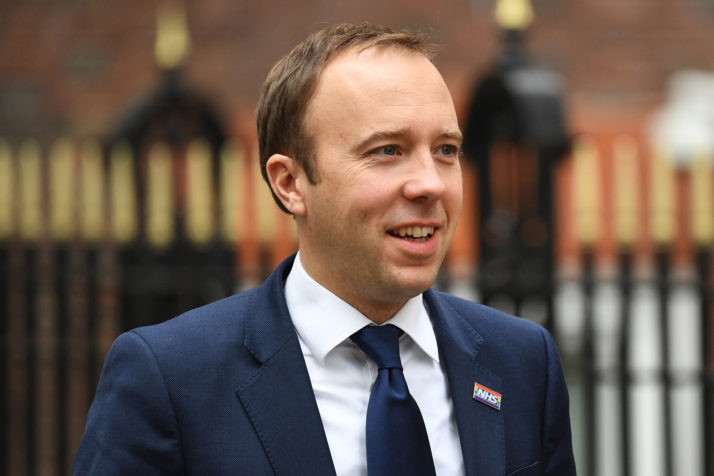 The robot will see you now

McKee acknowledges that there are areas where AI can work well, such as in screening slides for cervical cancer. For example, in September, the first systematic review of AI in medical imaging showed that algorithms can detect diseases with similar levels of accuracy to doctors (with the caveat that the research was based on a small sample, and that such pattern-recognition studies typically have poor reporting).

“There are some very fundamental problems in infrastructure that are not very sexy or glamorous [but] that could bring about huge benefits,” he said, pointing to the digitization of health records. “The mundane ability to get information available quickly is the No. 1 priority.”

Hancock has noted this point and says he agrees that the IT that staff use needs to make their lives simpler, not add to their burden.

“To those on the front line, frustrated by breathless talk of Artificial Intelligence when all you want is a decent working system, I understand the frustration — and I am determined that we use tech to make things better for you,” he said during a speech in September 2018.

“You basically open the door a little wider by using technology. It very rarely saves anything” — Tony Hockley, director of public policy at the Policy Analysis Centre

The challenge for the NHS is that it has been attempting to improve its IT systems for years with little success. In fact, in 2013, then-Health Secretary Jeremy Hunt challenged the NHS to go paperless by 2018. That deadline has clearly come and gone, with the possibility of digitized records not much closer.

The NHS — along with the Department of Health and NHSX — said it was unable to comment on any of these points, citing “purdah rules” ahead of the election.

Meanwhile, the idea that investment in AI will bring about cost savings in the long-term isnt accurate, said Hockley. Instead, efficiencies simply mean that more people get treated.

“You basically open the door a little wider by using technology,” he said. “It very rarely saves anything.”

Another key risk is safety, according to Adam Steventon, director of data analytics at the Health Foundation.

“How will we tell whether the AI algorithms are producing accurate results?” he asked, noting that, by its nature, AI learns and potentially changes over time.

“Its slightly different with AI because youre no longer delivering it to help the hospital function. Youre delivering care, in some sense” — Paul Taylor, professor of health informatics at University College London

There is also the concern over widening social and economic inequalities. This can take various forms, said Steventon, but one area is in the rise of digital health products, which not everyone can access.

“How do we continue to provide good quality care for people who cant or dont want to access health care through this channel?” he asked.

Most likely, AI in the NHS will need to be delivered through partnerships with private companies such as Google. And these havent always had the best track record on privacy. A case in point is the DeepMind collaboration with the Royal Free Hospital.Read More – Source