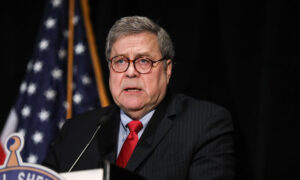 Attorney General William Barr on Saturday condemned the violent rioting that is occurring in cities nationwide amid protests calling for justice over George Floyds death.

Barr said during a press conference that the violence within these protests appears to have been “planned, organized, and driven” by groups of outside radicals and agitators who are exploiting the situation in order to achieve “their own separate and violent agenda.”

He said many of these individuals who have traveled out of state, are using Antifa-like tactics to promote the violence.

“Unfortunately, with the rioting that is occurring in many of our cities around the country, the voices of peaceful protest are being hijacked by violent radical elements,” the attorney general said.

Protesters flouted social distancing restrictions took to the streets across the country to express outrage over the treatment of Floyd, who died earlier this week in the custody of Minneapolis police.

A widely circulated video showed Floyd lying down and handcuffed as a police officer was seen kneeling on the mans neck for nearly nine minutes. The footage showed Floyd telling officers that he “cant breathe” before his body went motionless. According to a Minneapolis Fire Department report (pdf), Floyd was unresponsive and “pulseless” when he was being transported into an ambulance by paramedics from the site of his arrest to the hospital.

The police officer who was seen kneeling on the mans neck, Derek Chauvin, was arrested and charged with third-degree murder and second-degree manslaughter on Friday. Chauvin and three other police officers involved in the arrest have since been fired.

The incident had triggered days of protests that also consisted of looting of businesses and violence in Minneapolis, including torching a police station. Some protests in other cities on Friday also saw similar destruction including clashing with police, breaching of government complexes, and throwing of objects at police officers in some parts of the country.

Barr acknowledged the outrage felt by the national community, saying that accountability for Floyds death must be addressed, but emphasized that it should be addressed through the regular criminal justice system.

“That system is working and moving at exceptional speed. Already initial charges have been filed. That process continues to move forward. Justice will be served,” Barr said.

He stressed that the communities and streets “must have law and order” and it is the responsibility of local and state leaders to halt the violence, adding that the Justice Department will support all local efforts.

But the attorney general warned that “it is a federal crime to cross state lines or to use interstate facilities to incite or participate in violent rioting.”

“We will enforce these laws,” he said.

Earlier Saturday, Minneapolis Mayor Jacob Frey and St. Paul Mayor Melvin Carter said that a majority of the rioters who are involved in the destruction are from out of state.

Frey said in a statement that it appears that the city is dealing with individuals such as out of state instigators and members of organized crime, and possible foreign actors.

Carter said during a press conference that “every single person” law enforcement had arrested on Friday night in St. Paul, Minnesota, appeared to be from out of state.

“What we are seeing right now is a group of people who are not from here,” he said.

“And those folks who are agitating and inciting are taking advantage of the pain of the hurt of the frustration of the anger of the very real and legitimate sadness that so many of our community members feel to advocate for the destruction of our communities,” he added.