A day after the U.K. election, EU27 leaders took up a new position: “Lets get Brexit done!”

And if that wasnt familiar enough to Prime Minister Boris Johnson, they also warned that the clock is still ticking.

Speaking at the end of an EU leaders summit in Brussels, Commission President Ursula von der Leyen said she expected the Withdrawal Agreement to be ratified on the British side by January, and to move swiftly into negotiations on a new trade relationship.

She and other EU27 leaders said their top priority would be to maintain a “level playing field” between the EU and the U.K. — in an effort to prevent economic competition from undermining regulatory standards or putting the bloc at other disadvantages.

“Our goal is we aim at zero tariffs, zero quotas, zero dumping,” von der Leyen said at a news conference beside Council President Charles Michel. “This is important for us and this is what we work for.”

“We will have to prioritize, prioritize insofar as we will put specific focus on those issues that [would be at] an economic cliff edge at the end of 2020” — Ursula von der Leyen, President of the European Commission

But even as she expressed hope of forging a close future relationship, von der Leyen also warned that time was extremely short given the December 31, 2020 expiration of the transition period in the Withdrawal Agreement, and that negotiators would have to carefully prioritize the issues they tackle in their talks.

The agreement allows for an extension of the transition period but calls for that decision to be made by July 1, and it is unclear if Johnson and his new parliament will be willing to lengthen it.

“The timeframe ahead of us is very challenging,” von der Leyen said. “We are going to have to get to work as soon as possible.”

She said the Commission, at the direction of EU heads of state and government, was working to draft a negotiating mandate for the new future relationship, with a goal of starting the talks on February 1, immediately following the U.K.s expected January 31 departure. And she said that negotiators would focus on issues that must be resolved by December 31 next year to avoid chaos if the transition period ends on that date.

“We will have to prioritize, prioritize insofar as we will put specific focus on those issues that [would be at] an economic cliff edge at the end of 2020 if they would not be done,” she said. “These are issues where we have neither an international framework to fall back on nor the possibility to take unilateral contingency measures covering the period after the 1st of January 2021. So there will be sequencing,” 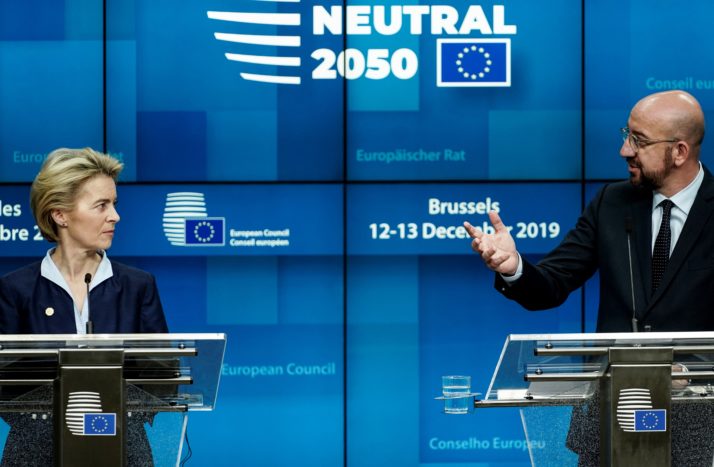 Commission, at the direction of EU heads of state and government, was working to draft a negotiating mandate for the new future relationship, | Kenzo Tribouillard/AFP via Getty Images

Other EU leaders also said they felt the pressure of the calendar.

Varadkar, whose country has arguably the greatest at stake in the talks, said in the next phase it could prove tougher for the EU27 to hold ranks as they have done until now.

“This next phase is gonna be different, because our interests are all very divergent,” Varadkar said. “So we need to stick together and we need to maintain solidarity and unity. And thats what we intend to do.”

He added, “Brexit doesnt end on the 31st of January. We enter the next phase, which is just as important, which is defining and codifying the future relationship thats going to exist between the EU and the U.K.”

“I want to tell our British friends and allies something very simple: you have enshrined the choice made a little more than three years ago , but you dont leave Europe”— Emmanuel Macron, French President

EU leaders said they planned to stick with the process that had served them so well until now — including continuing to place their faith in their chief negotiator, Michel Barnier, who will stay on in his role leading talks with London.

From the Councils side, Michel said he had spoken with Johnson to congratulate him, but also reiterated that the EU sees no time to waste.

“It is a clear victory and we expect that the British parliament will vote as soon as possible this agreement, this Withdrawal Agreement,” Michel said. “We are ready. We are ready to start the next phase. We are ready also to defend and to promote the European interest.”

French President Emmanuel Macron also expressed his congratulations and said he was eager to see the process move ahead.

“The time of clarification has therefore come,” Macron told reporters at a briefing at the conclusion of the summit.

“We want there to be no tarifRead More – Source