This article is part of the special report: The State of 5G.

The rollout of 5G mobile internet infrastructure has stalled in Brussels, over worries that mobile phones cause cancer — and sciences inability to prove otherwise.

“We are not conspiracy theorists,” said Olivier Galand, spokesperson for Brussels anti-cellular activists grONDES (a play on French words for “wave” and “scold”). The group blames “electrosmog” emitted from cell phone towers for causing serious health problems ranging from cancer to weaker bones — and theyre making sure politicians know about it.

“We are not against technology,” said Galand, “We just ask that technology respect health.”

The science behind Brussels decision to pause the roll out of 5G is at best inconclusive.

With scientists unable to definitively rule out that mobile radiation is harmful, grONDES skepticism is gaining more traction — and Brussels, the capital of Belgium and home to European Union policymaking, is a hotspot of concern.

In April, the Belgian region that includes Brussels halted work on its new 5G network, citing uncertainty about its health effects. Once expected to be online in 2020, work on the network is now frozen pending further study. Galand and grONDES, which protested the upgrade, claim credit for the turnaround.

Brussels system ran into trouble when the regions Environment Minister, Céline Fremault, from the center-left Humanist Democratic Center party, became wary that the 5G network would not respect radiation limits. “The people of Brussels are not laboratory mice,” Fremault told Belgian newspaper LEcho. Posters featuring an innocent looking, animated guinea pig have been popping up in apartment windows in the capital.

For Galand, the fear began when antennas almost went up in front of his apartment. He didnt know anything about antennas or electromagnetic radiation. So he went online and searched for it. There he decided the evidence was enough to convince him of a problem.

Galand took to the streets, organizing his neighborhood against the project — a move he and his fellow concerned citizens have repeated many times in the years since.

Galands anti-antenna stance has changed parts of his everyday life; he turns his WiFi modem off at night to protect his young child (and recommends others try doing the same and see how it affects their sleep). His primary concern, however, is cancer. Giving kids smartphones is “like giving cigarettes to the young people,” he said.

While house-hunting recently, Galand found what he thought was a perfect home in Uccle for his young family — until he learned it sat two doors down from a church that had rented its steeple to host satellite antennas.

“We said, Oh no,” recalled Galand, age 52, laughing at a hip cafe near the apartment they currently rent in Schaerbeek. “The house was very nice.”

Mobile technology requires that infrastructure be installed inside the communities that use it. That has made it a natural target for grassroots organizers like grONDES.

Now, the fight is moving from the streets to European politics.

French Green MEP Michèle Rivasi has made repeated requests for a health impact assessment of next-generation cell towers and accused the Commission of prioritizing telecoms interests over public health.

“I prefer to apply the precautionary principle and have more studies to know the consequences of technology,” Rivasi said. 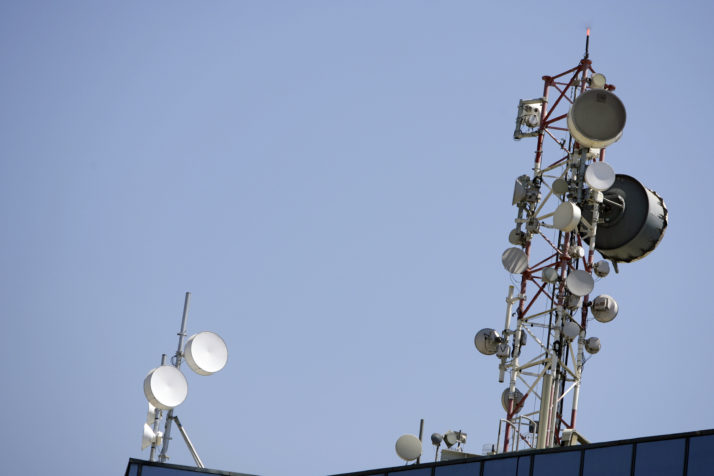 Rivasi is joined by her German counterpart, Green MEP Klaus Buchner, a physicist whos been collecting vintage mobile devices for decades and whose concerns have led him to create a website dedicated to the issue.

Now that the project is stalled in Brussels, grONDES activists are largely silent except for the innocent guinea pig posters in their apartment windows. But if Brussels tries to raise the radiation limits again, Galand said they will “of course” protest it.

The science behind Brussels decision to pause the roll out of 5G is at best inconclusive.

There is no scientific evidence to support electrosensitivity (people who say they suffer negative health effects from electromagnetic radiation) and scientists accuse anti-5G campaigners of using misleading figures and arguments.

But the inability of science to completely rule out harmful effects of electromagnetic radiation has given opponents of 5G plenty of room to maneuver.

Some research does bolster anti-cellular activists concerns. A study from the U.S. Health Departments National Toxicology Program found that high exposure to cell phone radio frequency radiation produced “clear evidence” of tumors in the hearts of male rats and “some evidence” of tumors in their brains and adrenal glands. The U.S. study was replicated in Europe by the Italian Ramazzini Institute, which found similar results.

An international appeal to the United Nations and the European Union to stop the rollout of the faster networks has been signed by 100,000 people representing 180 countries, including some scientists and MEPs.

Last year, a statement by the European Commissions Scientific Committee on Health and Environmental Risks (SCHEER) agreed that the medical literature remains inconclusive: “The lack of clear evidence … leaves open the possibility of unintended biological consequences.”

Similarly in 2014, the World Health Organization, citing research by its International Agency for Research on Cancer, found “no adverse health effects” had yet been connected to mobile use. But the organization stopped short of declaring phones safe, terming the devices “possibly carcinogenic to humans” and noting a lack of long-term study.

An international appeal to the United Nations and the European Union to stop the rollout of the faster networks has been signed by 100,000 people representing 180 countries, including some scientists and MEPs. “The deployment of 5G constitutes an experiment on humanity and the environment that is defined as a crime under international law,” the petition claims.

Its claims like that, researchers say, that illustrate the need for further study.

“The scientific community will hopefully answer these questions, because its not going away,” said Michael Wyde, a toxicologist at the U.S. governments National Toxicology Program who took part in the rat tumor study cited by opponents of 5G.

The inconclusive state of the research — with some studies raising health concerns and no scientific body willing to rule them out completely — has turned the question into a political issue.

“Its a question of how we want to manage the risk,” said Jon Samet, who chaired the WHOs working group on its International Agency for Research on Cancer, andRead More – Source