Russian politicians, researchers and reporters all attach great importance to voter turnout. To understand this, RT compares preliminary figures from polling stations to those from other countries and other periods in history.

Is there a way to forecast it?

The discussion about future turnout started way before the actual presidential campaign, along with attempts to influence it. Research and forecasts began to appear months ahead of the voting date.

Major public opinion research centers have conducted polls on the subject and released their forecasts that ranged from 80 percent voter turnout by state-run centers VTSIOM and FOM down to more realistic 52-54 percent by independent Levada Center. Reporters have quoted unnamed sources in the Kremlin that said Russian authorities expected the future turn out to be at 70 percent. At the same time, many researchers and experts pointed at the fact that average people usually make promises to pollsters simply to look good in their own eyes and one should always make adjustments when making forecasts based on opinion polls.

What are Russian politicians’ positions concerning the turnout?

As the elections came closer and hopefuls announced their intent to run, the turnout issue even caused another critical split in the ranks of Russian opposition. Anti-corruption blogger Aleksey Navalny, who is extremely media-savvy but banned from running (ironically, over two criminal convictions that involved corruption), called for “elections boycott” or “voters’ strike” and promised that his nationwide network of rather zealous supporters would promote this idea among the masses.

Navalny claimed that low turnout would undermine the legitimacy of the future president, but other opposition figures, like Grigory Yavlinsky of the liberal party Yabloko and ex-socialite Ksenia Sobchak, who presented herself as a “none of the above” option for those who could not choose from the seven other candidates, argued that Russia has no official turnout threshold in presidential elections and if those who don’t want the most popular candidate to win don't vote, that candidate would simply win with a larger margin.

Communist candidate Pavel Grudinin argued from a position of political theory, albeit not a Marxist-Leninist one but a common one. He has said that voting is a crucial part of democracy and also a good opportunity to discuss mutual problems and ways to solve them.

Other registered candidates also did not support the calls for boycott, and they were labeled “Kremlin puppets” by Navalny’s allies. In response, the opposition leaders accused Navalny of extreme selfishness and an inability to compromise.

Vladimir Putin has said that he would be happy with any turnover that would allow him to continue exercising his presidential duties.

What was the turnout at previous polls?

The turnout in Russian presidential elections has been slowly declining since they were held for the first time in 1991. At the time, well over 74 percent of citizens took to the polling stations, a fact that can easily be explained by the legacy of the Soviet regime and its strong and omnipresent political propaganda, the novelty of being able to choose from many candidates and the general feeling of crucial changes in everyone’s lives. 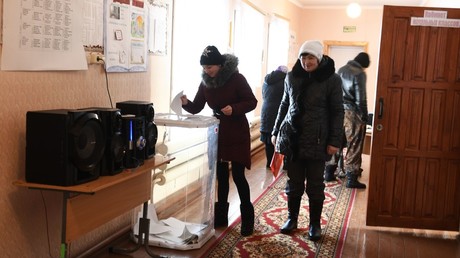 In 1996, the turnout already fell to almost 70 percent, and, in 2000, when Vladimir Putin ran for president for the first time, it fell to under 69 percent. In 2004, Putin was reelected when the turnout fell to around 64 percent and in 2012 it happened again, with a 65 percent turnout.

Experts and politicians, including Putin himself, have explained this tendency by pointing to the fact that ordinary people showed less political activity when there was more stability and predictability in their lives.

This thesis received some “experimental” proof in 2008, when Putin could not technically run for president and backed his longtime ally Dmitry Medvedev in the race. The turnout increased to just under 70 percent.

What about other nations?

Comparing various countries is not easy because many nations like Australia, Argentina or Belgium have compulsory voting with not-participation punished by fines. Still, if we have a look at recent national elections in large countries, the voter turnout there was even lower than previously registered Russian results. At the 2016 presidential elections in the United States, with all their scandals, bitter rivalry and allegations of foreign meddling, under 56 percent of citizens decided that they wanted to vote.

The 2017 presidential elections in France, where pro-EU liberal Emmanuel Macron locked horns with nationalist Marie Le Pen saw a turnout of about 75 percent, and the first round was higher than in the second.