The coronavirus pandemic is pushing countries around the world into a cutthroat competition for medical resources — and the United States is being cast as a leading villain.

U.S. President Donald Trumps administration stands accused of effectively hijacking shipments of masks and additional crucial supplies meant for other countries, including U.S. allies, and strong-arming private firms to prioritize America over other parts of the world. On Friday, Trump announced he was invoking the Defense Production Act to restrict U.S. exports of key medical gear.

Developing countries, where Covid-19 has yet to fully wreak havoc, are terrified of being left behind in the race for personal protective equipment, or PPE, and other materials because they cannot match the purchasing power of the U.S. and other wealthy countries.

Independent aid organizations that cater to the neediest corners of the globe are finding themselves competing for attention from medical goods manufacturers. The Trump administration has even asked aid groups to share those supplies with the U.S. government, in a bizarre reversal of the usual dynamic between the worlds leading power and those it typically helps.

“Its Lord of the Flies: PPE Edition,” said Jeremy Konyndyk, a former U.S. official who specializes in disaster response. “We need some global solidarity, and instead we have global competition.”

The United States faces criticism that its behavior during the pandemic is simply making the global situation worse.

The international scramble mirrors the beggar-thy-neighbor competition among U.S. states for ventilators and other items considered vital to halting the spread of infections. Its a reflection of the astonishing dearth of coordination among world leaders on the response to the virus, which has appeared in more than 180 countries.

It also could exacerbate and extend the crisis: If poorer countries are unable to stop the virus, it is even more likely reemerge in more developed parts of the world that thought they had defeated it.

Some inside the Trump administration are keenly aware of the risks. In a strategy document obtained by POLITICO and crafted by the State Department and the U.S. Agency for International Development, U.S. officials argue that mitigating the virus in poorer countries “is critical for the safety and security of the American people.” Failing to do so could derail U.S. efforts to help other countries become more financially sound and independent, they add.

“The pace and rapid spread of COVID-19 will likely surpass local response capacity and existing resources in many countries that are important to U.S. interests,” the document asserts. “Depending on the severity in each country, COVID-19 is expected to cause significant economic and social disruption.”

The document, labeled “sensitive but unclassified,” adds that “longer-term impacts could reverse valuable economic and development gains made over many years, which could slow a countrys Journey to Self-Reliance and undermine billions of dollars of investments by American taxpayers that have resulted in tremendous health gains.”

But the United States faces criticism that its behavior during the pandemic is simply making the global situation worse.

Multiple reports emerged this week in which foreign officials accused Americans — including U.S. government representatives — of essentially commandeering shipments of medical supplies meant for other countries, among them generally well-off U.S. allies in Europe.

In one case, according to a report in The Guardian, American buyers managed to “wrest control” of a shipment of masks from China that was supposed to go to France by offering three times the selling price. In another report, a German official accused the U.S. of an “act of modern piracy” after a shipment of masks from China that was meant for Berlin were seized and diverted to the U.S. while en route in Thailand. Similar reports emerged from Brazil, where a top official said China had set aside his countrys orders for equipment after the U.S. sent some 20 planes to pick up materials for itself.

It wasnt always clear whether the U.S. government had authorized such diversions of goods. In a statement to POLITICO, a senior Trump administration official asserted that the reports of U.S. malfeasance are “completely false.”

“The United States government has not confiscated or taken any masks intended for delivery to or ordered by any other country,” the official said. “We are producing vast quantities of materials domestically and are working through the appropriate channels to purchase supplies from other nations to meet our needs.”

But theres no question the U.S. is trying to procure as much medical equipment as it possibly can.

One company caught in the middle is U.S.-based manufacturer 3M. Trump on Thursday invoked the Defense Production Act to demand more N95 respirators from 3M, and the company has been the target of a threatening tweet from the president.

In a statement Friday, 3M expressed concern that the Trump administration had asked it to stop exporting certain respirators to Canada and Latin America and instead respond to growing demand in the United States.

“There are … significant humanitarian implications of ceasing respirator supplies to health care workers in Canada and Latin America, where we are a critical supplier of respirators,” the company said.

It also argued that other countries could retaliate by halting exports of crucial materials to the United States. Thats a key point that aid experts make as they try to predict the future; some note that the fight for medical equipment now could evolve into a battle for the elements that make therapeutics and vaccines.

“These are things that Americans rely on and it would be a mistake to create blockages or reduce the amount of back-and-forth trade of essential goods and services, including medical goods, across our border,” he said. 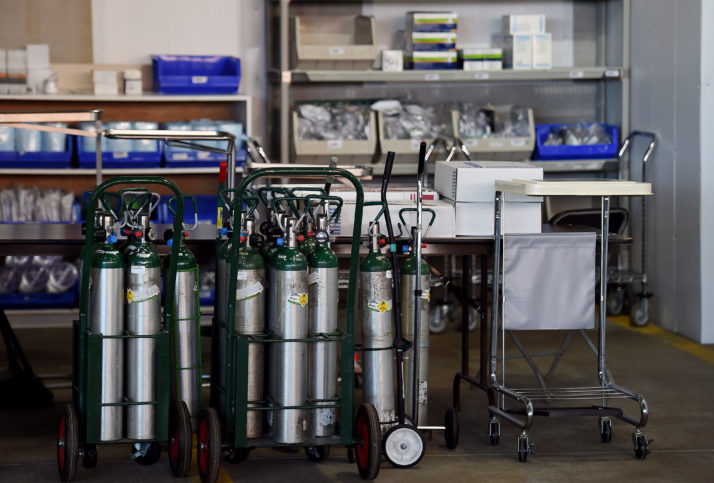 Still, there are signs that imposing controls on what the U.S. sends overseas will have bipartisan support in Washington.

Prior to Trumps announcement Friday that he would use the Defense Production Act to limit medical exports, House Foreign Affairs Chairman Eliot Engel (D-N.Y.) called for such a move.

“There is mounting evidence that the critical shortages of surgical masks and other personal protective equipment are being exacerbated by the unregulated export of such medical supplies from the United States,” Engel wrote to Vice President Mike Pence, who leads the administrations coronavirus task force.

And the United States isnt the only one imposing export restrictions due to the virus; the European Union did so weeks ago, while countries within the bloc have squabbled over supplies.

There already are more than 1 million confirmed cases of coronavirus worldwide, with more than 58,000 deaths. But the epicenters of the disease have primarily been in better-off countries — China, the United States, Spain and Italy.

U.S. officials, global health analysts and others say the worst may be yet to come, in less-well off places like India, Nigeria, Bangladesh and parts of Latin America. The health infrastructure in many of these countries is already weak, and sparse in rural areas in particular. Some of them also have large, densely concentrated urban populations that make it hard to exercise “social distancing” rules.

Nongovernmental aid groups also are caught in the competition for medical supplies.

Yet these countries are caught up in the global competition for medical supplies even though they have less cash to spread around.

One respondent was Bashir Ahmad, a top aide to the president of Nigeria, who wrote to Musk: “Nigeria, my dear country is in need. Kindly send 100s here, we really need them, thanks!”

The State Department and USAID have been caught in the middle, grappling with what often feel like contradictory impulses by the Trump administration.

One impulse is characterized by the “America First” philosophy, which says the U.S. must put its needs ahead of other countries and that other governments should share more of the global burden of humanitarian aid. The other is the desire to project continued U.S. dominance worldwide — the notion that AmRead More – Source
[contf]
[contfnew]