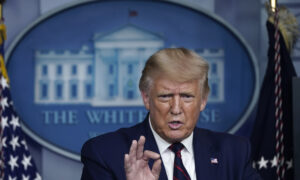 President Donald Trump said at a press briefing Friday that while “theres nobody been tougher on Russia that I have,” he wants to wait until he sees proof that Russian opposition figure Alexei Navalny was poisoned and so declined to criticize the Kremlin over what German authorities have said explicitly was a poisoning using a military-grade nerve agent.

“I dont know exactly what happened. I think its—its tragic. Its terrible. It shouldnt happen. We havent had any proof yet, but I will take a look,” Trump told reporters when asked about what message he had for Russia in the wake of Navalnys apparent poisoning and how the United States should respond.

Trump said he expects to receive evidence regarding the incident soon and that he would be “very angry” if it confirms that Navalny was poisoned.

“I would be very angry if thats the case, and well take a look at the—at the numbers and the documents, because were going to be sent a lot of documents over the next few days,” Trump said.

Navalny, a politician and corruption investigator, fell ill on a flight to Moscow on Aug. 20 and was taken to a hospital in the Siberian city of Omsk. He was later flown from Siberia to Germany for treatment and has been in an induced coma in a Berlin hospital.

German authorities said on Wednesday that tests showed that Navalny was poisoned with a chemical nerve agent from the Novichok group. British authorities previously identified the Soviet-era Novichok as the poison used on former Russian spy Sergei Skripal and his daughter in England in 2018.

NATO Secretary-General Jens Stoltenberg on Friday condemned what he called an “appalling assassination attempt” on Navalny and called on Moscow to answer questions about the poisoning to international investigators.

President Vladimir Putins spokesman has rejected allegations that the Kremlin was involved in poisoning Navalny and accused Germany of not providing Moscow with any evidence about his condition. Kremlin spokesman Dmitry Peskov said on Sept. 3 that Russian investigators tested Navalny for poisonous substances when he was in a hospital in Siberia and didnt find any.

Germanys announcement that Novichok was the poison used on Navalny was met with support from Trump administration officials, with White House National Security Council spokesperson John Ullyot writing in a tweet that “Alexei NavalRead More From Source
[contf]
[contfnew]